A colourful Eid ul-Adha memory from the village Bamabala

Biology teacher Züleyha Özşahin (1): Getting to know Pakistani culture and people was one of the best things in my life

A colourful Eid ul-Adha memory from the village Bamabala 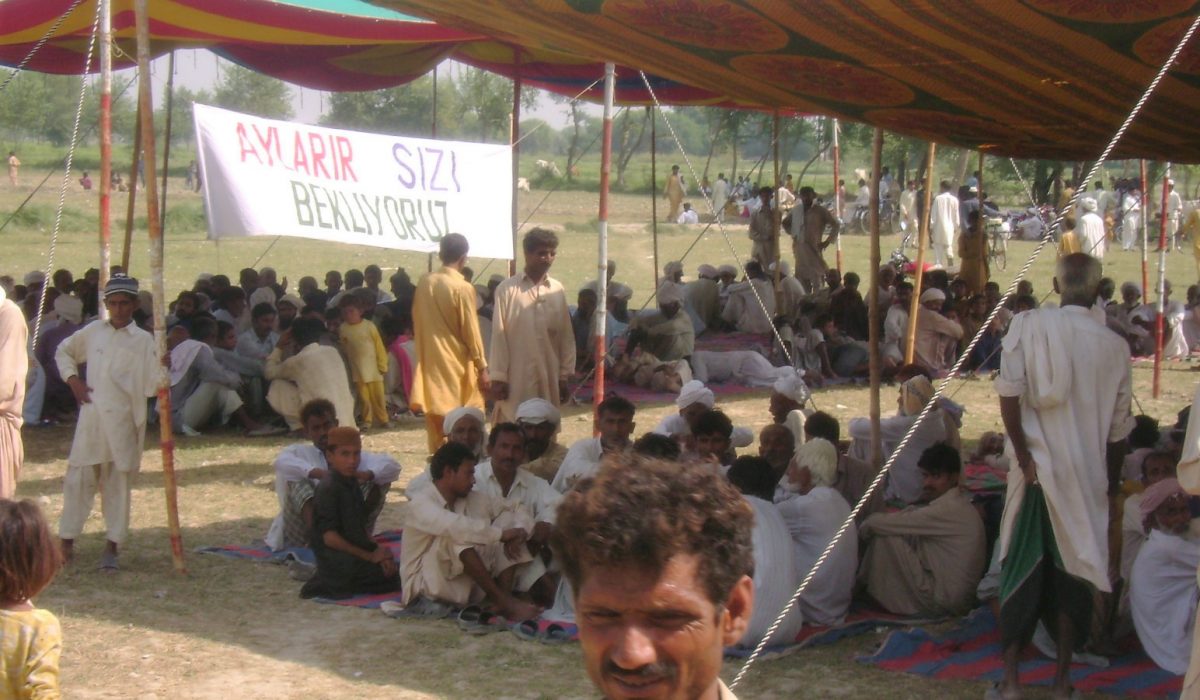 Educationist Doğan Yücel wrote a memory of from an Eid-ul Adha he experienced while working in Lahore years ago. He explained how the sacrificial animal shares sent from Turkey were delivered and distributed to a remote village near Lahore and how the aid workers were received in the village.

It was the beginning of 2007. A lot of shares for sacrificial animals arrived from Turkey to be slaughtered and distributed in Pakistan on occasion of Eid al-Adha. We did not want to slaughter and distribute all animals in Islampura only. There was a shortage of space and we also wanted to mediate for people to access meat in different places. With this in mind, we requested some businessmen with whom we were acquainted in Lahore if they could sacrifice animals in their hometowns or in the poor neighbourhoods they knew. All of them consented.

Afterwards, we divided tasks among 7-8 people to supervise the slaughter, butchering and meat distribution of 30 animals. Each one would be responsible for having the animals transported from the barns, finding the butchers, having the meat chopped, and distributing the meat. A friend of ours would assist each businessman during the slaughter of the animals. He would read the names and weigh the meat. He would also check whether animals were fit to be sacrificed. I was to go the village where Mr. Mudassir would supervise the slaughtering of the sacrificial animals.

They thought I was the donor of the sacrificial animals

Mr. Mudassir had the animals loaded on trucks overnight and took them to Bamabala, his native village in district Okara. We sent sacrificial meat to that village several times in the following years as well. We chopped up the sacrificial meat, which had been hauled as carcasses by trucks, and distributed them in Bamabala. Once, together with our schools’ director general, we conducted a scholarship test with the OMR answer sheets, which the students in Bamabala saw for the first time in their lives.

Okara is located near the Indian border and is in the south of Lahore, with a population of around one million. It lies in the middle of Pakistan’s most fertile lands. In the morning, we were to set off from Lahore in Mr. Mudassir’s car, as I did not have a car then. We set off about 1.5 hours before the Eid prayer. However, as it was winter, there was a very heavy fog. We were moving very slowly. We had to drive for 90 kilometres from Lahore to our destination. Normally we were supposed to arrive in 1.5 hours. However, no matter how rushed we were, our trip took about 2.5 hours.

We arrived at the entrance of the village Bamabala, where the sacrificial animals were to be slaughtered. The people of the village, who had been preparing for the Eid prayer, had spread their prayer mats in front of the Bamabala High School and were waiting for us. Banners were hung at the entrance of the village. The banners caught my attention, they had also written my name with a slight misspelling, “Respected Dugan Yucel, Welcome to Bamabala”. The people of the village thought that I had donated the sacrificial animals. We immediately went to attend to the Eid prayer in front of the high school. They reserved a place for us on the front row. About 2,000 people had been waiting for us to arrive. They had waited for us on the prayer mats for over an hour.

A big stampede ensued during the meat distribution

At the end of the Eid prayer, the imam said all of them were thankful to me for the sacrificial animals the victims and asked me if I would like say a few words. I said, “People have already waited here for an hour in the cold weather, there is no need for more words.” After the prayer, we went to the village headman’s house. The headman was a close relative of our businessman acquaintance. Meanwhile, the population of the village was around 10,000. Villages in that geography had an average population of 10-15 thousand. In the Pakistani administrative system, the headmen are also considered mayors. After having breakfast at the headman’s house, we went to the slaughterhouse which was quite nearby. I had told the butchers not to start the slaughter before I arrived.

The slaughter of the sacrificial animals started in the courtyard of the high school where we had performed the Eid prayer. On the one hand, I was reading the names of the shareholders and on the other hand, I was weighing the carcass and taking notes. When the slaughter was over, we handed the skins to the butchers as wages. Later, we moved on to the distribution of packed meats. The distribution started on the ground floor of the primary school building next to the high school. After handing a few bags of meat, I started watching the distribution. Due to the stampede that occurred in a short time, those who distributed the meat had to go upstairs. They started to drop the packs in front of the people who were crowding there to receive a pack of meat. However, in the meantime, the stampede increased a lot. While people were trying to get meat by pushing one another, they were also climbing on top of each other. There came a time when those who had meat packets in their hands reached the upper floor! I could not help thinking, ‘Could we have done a better organization?’

They organized a ‘ghora dance’ for us

It did not take half an hour to distribute the meat of 30 sacrificial cattle. Following that the mayor organized a reception for Mr. Mudassir and me. They were to display a traditional and cultural horse dance called ‘ghora dance’. There were two horses; one red and the other ash coloured. They were dancing to the rhythm with the music, rising and lowering their hooves. Towards the end of the entertainment, those who made the horses dance in front of us and made the animals greet us. After repeating that a couple of times, I realized from one of the caretaker’s actions that they wanted a tip for the dance. However, I had not taken any money with me because I had rushed out of the house in the morning and had also thought ‘there would be no need for that’. I checked my pockets to find 100 rupees there; it equalled about $2 at that time. I asked Mr. Mudassir, who was sitting next to me, “May you give some tip to these gentlemen? I don’t have much with me” I, who had donated 30 sacrificial cattle (!), had no money to tip the performers! 😊

After the performance, we went to the house of Mr. Mudassir’s brother-in-law. He was a Chaudhry of the village. The word ‘chaudhry’ means ‘head’ or ‘leader’. They offered us food. The time we went there was also the harvest time of sugar canes. They told us about the village and showed us their fields. I had to return in the evening, as the slaughtering of the sacrificial animals were underway in Lahore. We returned to Lahore in the evening before the fog descended. My biggest regret from that day was that we had not taken any photos.