A Page from History: Treatment support for thousands of patients from Kimse Yok Mu

Biology teacher Züleyha Özşahin (1): Getting to know Pakistani culture and people was one of the best things in my life 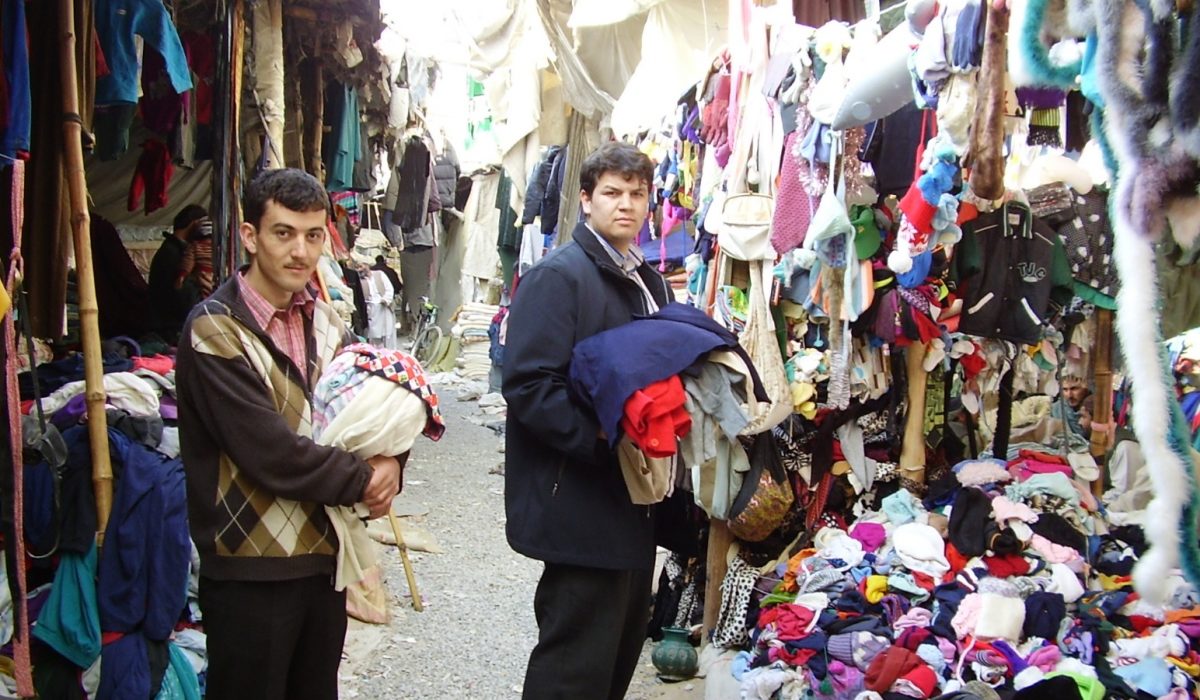 Taner Koçyiğit (right) at the second-hand market in Chaman, which he describes in the article.

In this part of the article series, educationist Taner Koçyiğit wrote about a famous market in Quetta where goods brought by the ‘suitcase trade’ were sold. He explained how and from where those goods came and what kind of products they bought in that market, where everything from A to Z were available.

Quetta is the capital and the largest city of the Balochistan province at location near to Pakistan’s border with Afghanistan. Being close to the Afghan border is one of the vital elements of commercial mobility. As it was renowned in the city, a significant portion of the merchants in Quetta dealt in what was called ‘smuggling’ in literature, but was defined as ‘cross-border trade’ in Quetta. Numerous products would come to Pakistan in transit from hundreds of countries in accordance with respective contracts and, from there, were transported to Afghanistan in containers. The entrepreneurs (!) in Quetta would travel to the border cities of Afghanistan and bring those products, which had been offloaded from the containers, back to Pakistan by ‘smuggling’ in sacks. In Quetta, almost all products hailing from Afghanistan were duty-free that way. Saying ‘they would arrive as smuggled’, it meant the goods would arrive from across the border. At the same time, the people in both sides could sway across the border without a need for documents.

There were several reasons for that situation: Firstly, there were millions of undocumented Afghan immigrants in Pakistan at that time and the issue of documentation began to be resolved in recent years when the Government of Pakistan started to issue ID cards to some of such immigrants who had been living in the country for a long time. Secondly, the clothing and accessories sent in the  humanitarian aid consignments from the developed countries were not used in Afghanistan due to cultural differences. In cases when clothing items like blue jeans were sent as aid to a country where almost all of the people wore shalwar kameez, the thing to do was either discard the clothing once and for all or haul them back to Pakistan, where they were put to use. Thirdly, since Afghanistan was ravaged by war and conflict for nearly 40 years, the state order was weak and there was almost no enactment of a customs system. Another point was that almost all of the goods were second hand, so no questions were left to be asked at the border. Even if questions were asked, what customs could be taken from the goods of which bag was worth 5 to 10 dollars each? Finally, hundreds of thousands of immigrants and low-income people were making their living from that sector, even at the expense of transporting the cargo in sacks. Thwarting this system, which was a kind of ‘suitcase trade’, would mean to force the people who earned their living from that trade to illegal means. For such reasons, the local authorities would not prevent small-scale suitcase traders that much.

We witnessed how easy it was to cross the border

In addition, millions of people from the lower income group met their needs from these markets. People who could not afford the new goods they needed could at least buy them as second-hand. Unutilized aid materials like those were also sold in markets in other cities.

We went to Chaman, a city on the border of Afghanistan, a few times to organize exams for finding students deserving scholarship. During those visits, we personally witnessed that it was not an exaggeration if one said he had crossed the border as he swayed. Moreover, even we could easily go beyond the border, if we ever wanted to. Because every day, hundreds, maybe thousands of people used to shuttle between the two countries without showing their identity papers.

Due to the difficult conditions suffered by Afghanistan, the humanitarian aid materials arriving from different countries passed through that border in the same way and the goods would be hauled back in sacks to be offered for sale especially in Quetta and Peshawar. Since those relief supplies usually came from the Western countries, they were often of a quality that we were not able to find in Pakistan at that time. For example, we had gone to a second-hand market in the border city of Chaman to see if we could find any quality clothes that would fit us. While we were looking in the market at other products that could be useful, we stopped in front of a mixed goods shop. The vendor said, “What would you like?” When we asked him, “What do you have as good and of quality?”, the man brought a sack and emptied it in front of us. Dozens of laptops had been packed in a sack. We said, “Let’s buy some from the ones that will work,” but the man said we would not be allowed to try the laptops and we should buy them as they were. Eventually, we gave up buying a computer, because it could be out of order and we would have wasted our money.

Round ovens and room heaters were bought from that market

In another shop right next to the laptop vendor’s, military equipment and accessories were sold in general. There were sacks full of guns of miscellaneous brands. Meanwhile, we also saw some military clothes and bulletproof vests in the shop. The shop owner said they had been obtained during the conflict in Afghanistan. Dozens of shops were lined up side by side where you could find weapons and accessories of all sizes and quality, from electronic devices used in remote listening to binoculars for sniper rifles.

Products from Afghanistan were not always such unusual goods. Round ovens and large gas heaters with smokestacks, which were not found anywhere in Pakistan, were brought to Quetta from Afghanistan. When many of our teacher colleagues or seniors like department heads from Islamabad or other cities used to visit Quetta, they would buy a round oven or a room heater and take them to their respective cities. For some friends who were not able to visit, we used to buy the heater or oven and send it via railway cargo. Many products that we were not able to find in Pakistan at that time – such as Turkish biscuits, tomato paste and the like – would also come from Afghanistan. For this reason, there were many items that could only be found in Quetta. After receiving orders from friends in other cities, we would pack the goods in boxes and send them by railway cargo. In fact, in 2005, I had brought bags of food to the reading retreat in Khairpur Mirs and opened a stall in the garden of the school. I had sold many products, which they would not be able to find in their own cities, to my friends at affordable prices (!). Those products included things like tomato paste, quince, Turkish jams, and feta cheese.

When, in the market I mentioned, we could not find any clothing or anything else we needed, we returned empty-handed, but there were hundreds of similar shops in downtown Quetta. The prices of those second-hand shops were very affordable and since we were able to find quality products, I and friends often chose to buy our needs from there. I bought almost all of my shoes from those second hand shops. Once we needed football shoes and again, we went to a second hand shoe store with friends. In front of those shops, the shop assistants used to take the incoming shoes out of the sacks from morning to evening, first washed them with detergent water, then dried them and put them on the counter. In other words, hygiene and customer satisfaction were their priorities. 😊

There were many different shoes but, on that day, we saw a pair of shoes which we had never seen before. All of us but a friend opted for regular football shoes; a friend found a pair of white crampon-like shoes with spikes on the soles. He bought that pair of shoes, saying it looked good and did not slip. He played football matches with it many times. He used it a lot by saying things like “This must be the new fashion! They fashioned it very well! I guess it’s a special technology!” Years later I learned that those shoes were actually golf shoes and were not really suitable for football at all. 😊

We used to buy some of the school supplies from that market. We once found a large plastic inflatable pool at the second-hand market. We bought it with friends and installed it on the roof of our house. On weekends in the summer, students would come to us for activities and have fun swimming in that inflatable pool. Later, we were unable to use the pool because we were struck by a water shortage. The municipality in Quetta started to release water to the mains only for a few hours on some days of the week, and it did not fill even half of the underground water tank of the house. We had to call a water tanker at least 3-4 times a week to meet our daily needs. The water tanker would first discharge the water to fill the underground tank and we would later pump the water with a motor into the plastic rooftop tank. All the water in the houses would flow from the plastic rooftop water tanks by gravity. Due to such problems, we could not actually use the inflatable pool for a long time.

Part Twelve: First, they threatened to kill; later, they entrusted their children!