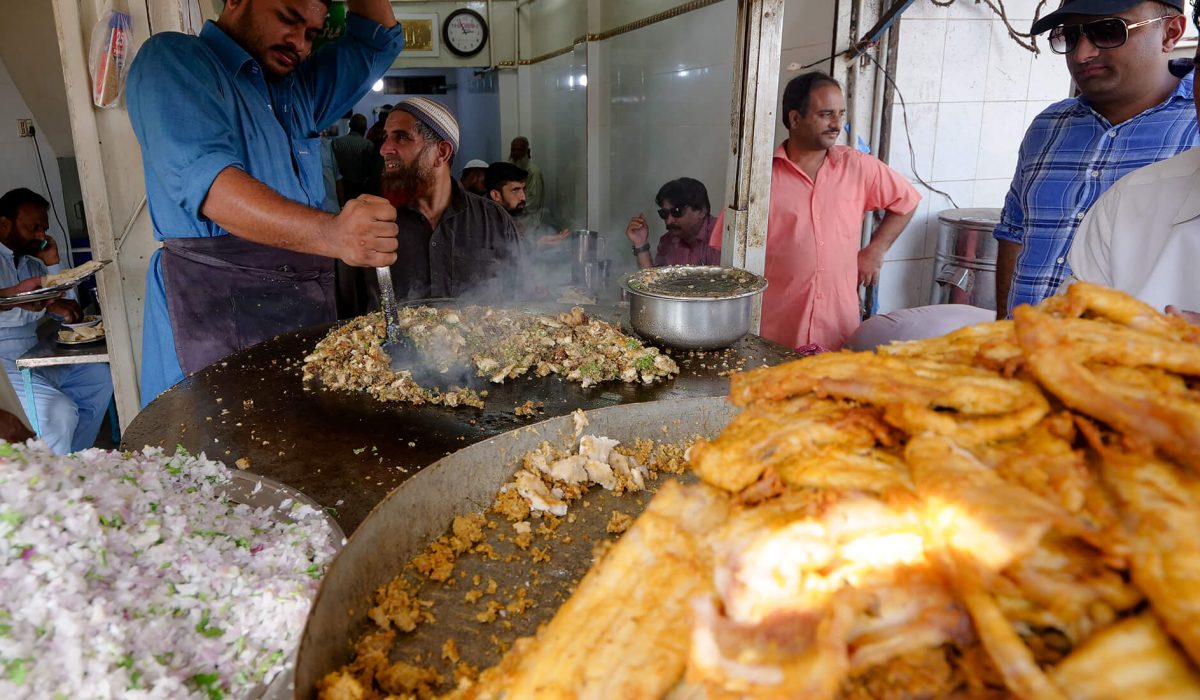 Having described Pakistan’s vegetables and fruits in his previous articles, researcher Doğan Yücel wrote about Pakistani street food this time: Some of these flavours, which are foreign to the people of Turkey with their names and tastes, transform into addiction after the first try.

Challi (Spicy Corn-on-the Cob): Corn cobs are boiled overnight with their leaves intact. In the morning, ash with embers in between are placed in a large basket. Boiled cobs are stored in the warm ash. Since the weather is already hot, the corn cobs never get cold. Leaves on the cobs are removed and they are served after they are salted and seasoned with lemon juice dipped in a mixture of spices.

Samosa: Usually made with spicy mashed potatoes as stuffing, the filo pastry is folded into an amulet shape and fried in hot oil. It is served with mint sauce or ketchup.

Pakora: It is made by mixing lentil and chickpea flour paste with vegetables like onion, peas, and potatoes and spices. The paste is deep fried like yeast fritters in hot oil. In Pakistan, no iftar in Ramadan is complete without samosa and pakora.

Moong Phali (Peanuts): Salted and sand-baked peanuts are sold by street vendors, especially in crowded places. After weighing on a hand scale, the peanuts are heated a little in the burning sand. After the sand is sifted with a colander, the peanuts are poured into a pouch and served as hot. Be careful while eating, because you may also swallow some sand.

Gajar (Carrot): You may see very large carrots in Pakistan. Sold per piece and as peeled in the back of a donkey cart or on mobile stalls, carrots are sliced before served with a mixture of salt and spicy seasoning.

Gol gappa: The gol gappa balls are made by deep frying wheat flour and semolina dough like fritters. As they are fried, the gol gappas take a round form. When cooled, the taster opens a hole on the top of the delicate gappa and adds a mixture of potatoes, chickpeas and other fillings. It is eaten by dipping it in mint or hot sauces.

Lobia Chaat (Kidney Beans Salad): Prepared with chopped onions and spices mixed with boiled kidney beans, this salad is especially sold per plate or glass by peddlers in the public parks from large containers  .

Gharkan (Gherkin): Sold per piece and dipped in a mixture of salt and spicy seasoning, gherkins are served to be eaten as crunchy.

Channa/Cholay (Chickpeas): Chickpeas are cooked in a spicy and tangy tomato-based sauce until they almost turn into a paste. People buy this dish along with fresh wholemeal tandoori bread. It is usually packed and sold in transparent bags. People pour it on plates and eat it at home or at work.

Nihari (Mutton or Beef Stew): It is like a spicy tandoori kebab of mutton or beef shank meat, cooked in stew form on a low fire from the late evening until the early morning to be eaten for breakfast. The word nihari comes from the Arabic nahaar which means meaning “morning”. In addition to mutton and beef, nihari may also be cooked from chicken or veal in a quicker time. A very common dish in Pakistan, nihari is said to have originated in the Mughal court.

Haleem: It is a dish cooked from pounded lentil flour, wheat flour and finely pounded meat. It has the consistency of an almost soft paste. Since the meats are cooked extremely well, they simply blend with the stew made of pulses. It is eaten with warm tandoor bread.

Daal Maash (White Urid Lentil Stew): It is a mixture of maash, a chickpea-like broad bean, and the mashed form of daal, red lentils. It is usually not very spicy. It is eaten with naan, hot tandoor bread made of white flour or with chapatti, a thinner bread made of whole-wheat flour.

Takatak: It is made by chopping and crushing tomatoes, peppers and meat with iron spatulas on a large metal sheet. In Turkish sense, it is a kind of tantuni. As an indispensable part of the roadside breakfast food items, takatak gets its name from the rhythm of chopping as the blade keeps on striking on the plate while the ingredients cook fast.

Paratha (Pan-Fried Flatbread): It is a layered flatbread that is cooked on a pan. It may be served as plain or stuffed with potatoes, vegetable mix or minced meat. Due to its popularity, it is also available at supermarkets in frozen packs.

Chilgoza (Pine Nuts): The price of pine nuts in Pakistan is much more affordable as compared to other countries in the world. Meaning ‘pine cocoon’, chilgoza is obtained from a pine variety found in the western forests in Pakistan and its neighbours in the outskirts of the Himalayas. It is sold as peeled or unpeeled by Uzbeks and Pathans in dry fruit shops.

Baadam (Almonds): Due to the favourable climate, almonds are abundantly found in Pakistan, especially around Peshawar and in the northern regions. I do not know if the almonds in that region may be compared with others elsewhere. They are both very coarse and flat, and their shells are very thin and soft enough to be crushed by hand.

Kajoo (Cashew Nuts): They hardly grow in Pakistan, but they are very popular and widely consumed. In Khairpur Mirs, date producers remove the seeds of the dates and fill the gaps with cashews before selling or exporting them. We would ask our colleagues in Khairpur Mirs to bring us from those nut-filled dates. Before going to Turkey for the summer vacation, we would purchase those dates as gifts for our friends and relatives.