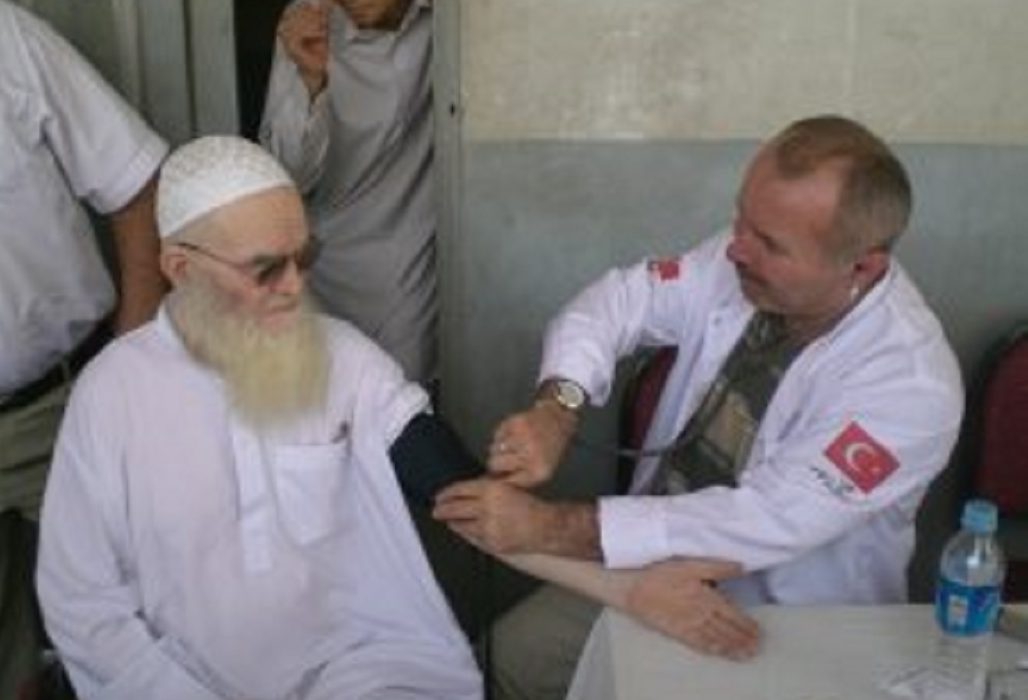 In the ‘Page from History’ series, this time we share the story of medical support provided by a group of doctors from Turkey after the great flood disaster in Pakistan in 2010. Educationist Doğan Yücel wrote about the humanitarian assistance provided by the members of the Sakarya Afiyet Healthcare Association, in collaboration with the volunteering staff of the PakTurk Schools.

A group of physicians and medical specialists from the Sakarya Afiyet Healthcare Association visited Karachi for humanitarian relief after the 2010 flood disaster. A medical team consisting of an obstetrician, a urologist, two thoracic surgeons, a family doctor, an anaesthesiologist and a medical assistant performed health screening for three days and provided medicinal aid.

The medical delegation visited the hangars of the Pak-Steel Steel Factory, where the flood victims took shelter, and paid close attention to the Turkmen and other refugees in the Afghan refugee camp. Doctors, who provided direct health services to approximately 1,500 people, covered all of the expenses with their own means.

A group of businessmen in Karachi also organized dinner programs for the guests from Turkey. On the last day of the visit, students at the PakTurk Clifton Branch in Karachi were screened. In addition, historical and touristic spots in and around Karachi were visited.

The taste of Turkmen pilaf is unforgettable for 20 more years

I would like to share an interesting anecdote here. On the way back from the Afghan refugee camp, my car’s air filter latch was broken. There was no place to get it repaired on the way. One of the doctors placed a stone on the filter cover and quickly closed the hood of the car. The stone was larger than he had intended! 😊 The middle of the hood was bent. While there, our Turkmen acquaintances offered us the Turkmen pilaf they themselves cooked. It’s been 10 years since eating that pilaf, but the taste is still on our palates, I think it will be unforgettable for another 20 years if we live that much…

The end of a beautiful day, sincere hospitality from people who themselves were refugees, a beautiful environment… There are moments when dreaming about them is much more valuable than the experience. This is because the meaning and beauty of such moments is better realized later. Some doctors, seeing the state of the people there, provided cash aid out of their own pockets.

Doctors hosted the businessmen from Karachi in Sakarya

During our first meetings with the official from the Association, he told us that they would visit Pakistan with 14 medical doctors. However, they reached Karachi in a group of 7 people, including 6 physicians and himself. We asked him to tell us the group’s travel stories. They had included their future visit to Pakistan in the association’s annual schedule of events. After preparing the project, they had applied to the Turkish Cooperation and Coordination Agency (TIKA). When the TIKA had suggested them to visit another country, they decided to travel to Pakistan on their own. They had also paid for the plane tickets and other expenses out of their pockets. In addition, the doctors had used their annual leave to visit Pakistan.

About two months later, the same physicians hosted us in Sakarya along with a group of businessmen we took from Karachi to Turkey for business-to-business meetings. The doctors hosted the business in their homes. Just as the businessmen in Karachi had not let them pay for the food, the people of Sakarya too did not let the visitors from Karachi pay even a single penny for food, drinks and treats during the course they hosted them in Turkey. We thank them once again today.