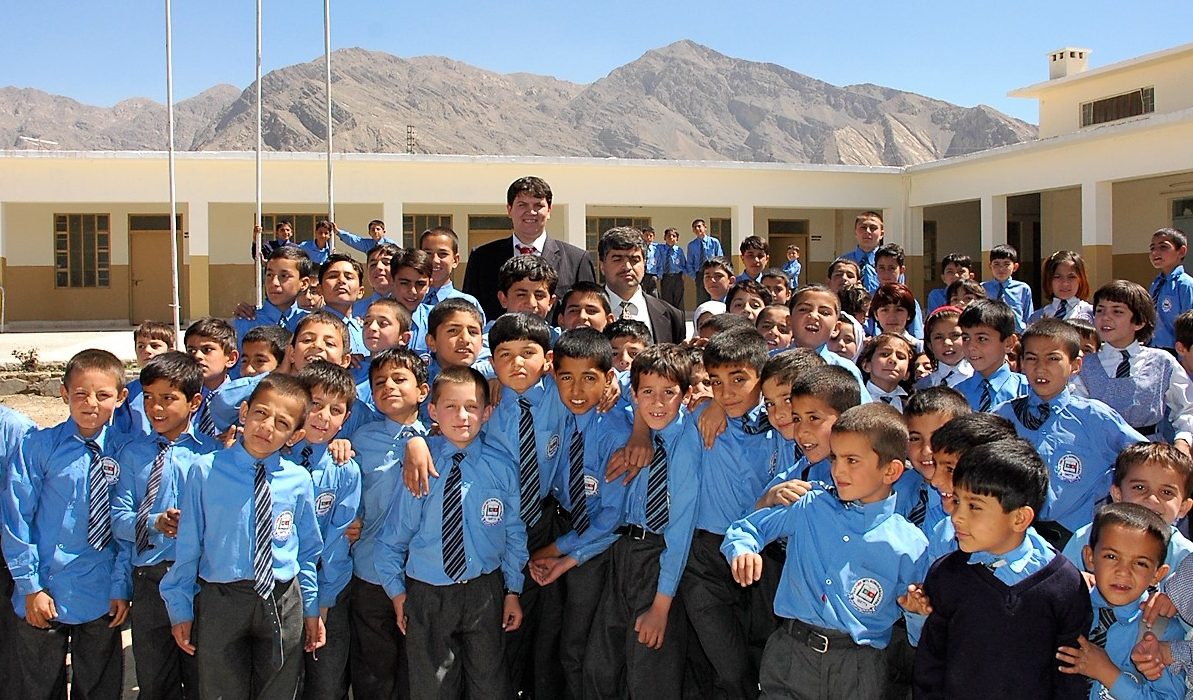 English teacher Taner Koçyiğit with his students in his first year in Kuetta...

Educationist Taner Koçyiğit continues to narrate his life in Pakistan with its entire colourful memories. In the ninth part of his memoir, he wrote about his first day in Quetta and the first Friday prayer he attended there, not forgetting the interesting solution he and his colleagues developed when they could not find a house close to the school building.

We said goodbye to our friends in Islamabad on January 21, 2004, and on the same day I took a flight to Quetta. The house we stayed in Quetta was rented right next to the school in the Chaman Housing Society. I stayed in the same house with late Ali Kırkgeçit, Mehmet Emin and a few other friends. It had been a few days since I had just come to Quetta. I was planning to settle, but my friends said we had to leave the house in a few days. It turned out that the landlord would come to live in the house himself and he had given us a very short time to find a new house.

Friends working at the Chaman Housing branch would leave the house in the morning and walk 50 meters to their school. The school we worked at was quite far from the house where we stayed. The distance was not a problem, but finding a public transport to reach there on time was. I understood the reason for that on the first day we went to school a few days later. None of us had a car while cars could be bought at very affordable prices, but the financial crunch did not allow even that.

‘At least take off your ‘crucifix’ tie when you enter the mosque!’

Even though the lessons had not started yet in our first days at school, we, as Turks, used to go there wearing formal suits with ties. Whenever we arrived at the school, those who saw us at the door would glare at us as if to say, “What are these foreigners in ties doing here?” Many people who did not know that we were Turkish used to call us ‘gora’, a word literally meant ‘white’ and was used for the British, non-Muslims, or foreigners in general. One day, I and friends went to the mosque closest to the school building to perform the Friday prayer there. At the entrance, someone from the congregation said: “Come on, you don’t wear shalwar kameez like us; at least, take off your ‘crucifix’ tie when entering the mosque!” We took off our ties, but the congregation kept looking at us with not-so-happy eyes until the Prayer was over.

It did not matter even when we said, “We are Muslims just like you are; we are Muslim teachers from Turkey,” they were not able to bring themselves to become totally sincere with us. They said our outward appearance was similar to the ‘gora’, i.e., the non-Muslims. After the Prayer, we immediately returned to the school as recommended by a local friend, and from that day on, we decided to wear shalwar kameez, Pakistan’s natural dress, on Fridays. When we went to the next Friday Prayer in the local attire, the whole congregation greeted us with smiles and they hugged us while we were leaving the mosque.

Meanwhile, the time given to us by the landlord had expired and it was time to leave the house. When we could not find a place close to the school building, we decided to stay in different rooms of the school until we found a new house. We wanted our house to be close to the school because the school’s cook also cooked our lunch and dinner. We decided among ourselves, “Since our cook is here, let’s stay at school until we find a new place.” I and two friends stayed in the room which was used as a chemistry laboratory but had actually been built as a kitchen. Another friend slept on one of the big round student tables in the kindergarten. The late Ali Kırkgeçit slept in the garage-like storage room. Another friend curled on the green corner set in the female teachers’ lounge, and another slept in the accountant’s office.

We used to wash our laundry by hand in plastic tubs and dried our clothes in the classrooms or on the school playground. The building used for classes during schooltime was our home after the students’ use. The activity room with the TV set in the kindergarten became the hall where we watched movies in the evenings. On the next day, students who came to the school in the morning would be unaware of the repurposing of the school; they would attend to their classes and go home as usual.

You either go and find a house or stay at a hotel!

While watching the TV in the kindergarten, a friend propped a big plush teddy bear, which the children played in the daytime, under his head as a pillow and fell asleep there at night. He was awakened in the morning by the janitors. Until that day, no one knew we had been staying at the school. From that day on, it was no longer a secret. 😊

I guess we stayed at the school for 4 or 5 months. It ended when we received the ultimatum from the head office: “Either you find yourselves a house or go and stay at a hotel!” Indeed, we left the school and stayed at a hotel for about a week. I will relate our stay at the hotel in another article.

Part Eight: A Turkish school in the deserts of Balochistan and Pashtun students