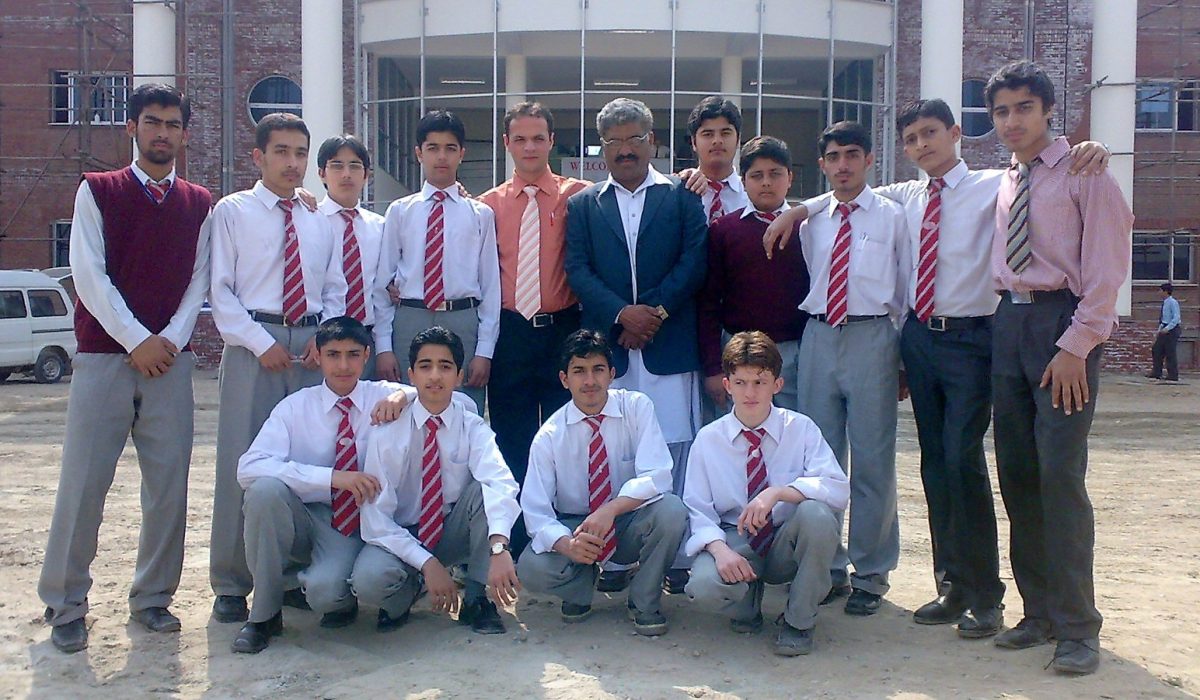 Engin Baştürk (fifth from left) was taking some students and their parents for a tour of the new school under construction.

Educationist Engin Baştürk wrote about finding the plot and starting the construction of the new PakTurk School building in Peshawar to meet the demands posed by increasing number of students. Baştürk explained how he and his colleagues started education in an under-construction school building which could not be completed due to time constraints.

We used to continue our education activities in a small school building in Peshawar. In 2006, it was decided to build new school buildings for PakTurk Schools in three cities i.e., Lahore, Islamabad, Peshawar. The searches for school plots started. There was not a single stone unturned within Peshawar city area; so, we looked for plots even in the fringes of the city. Finally, by Allah’s grant and favour, a plot at a very good location was found… but it was an industrial area. A stream divided the city from the industrial area. The plot was purchased and the construction began. As we continued education at the old school building, we also told both our students and their parents we would move to our new building next year, six months later.

I never forget: It was April and I had to show a parent, who visited to enrol his child to the school, the new school building. I took him to the construction site. The foundation of the school had just been laid and I explained, “We will start teaching in this building next September.” Pointing at the foundation of the building, I explained to him where each room would be. The prospective parent kept on listening with a surprised look on his face. It was obvious he didn’t believe my words. It was impossible to complete a four-storey building, including the ground floor, in six months in Peshawar conditions those days.

Parent: The five-storey building will be nice, but it won’t be ready on time

Time passed. The ground floor construction of our new school building was just finished. I was chatting with one parent; he was telling me he had seen the new building, that it was beautiful, but it was impossible to complete it on time. I used to visit the construction site every day. The ground floor was just finished; so, there wasn’t much to see from afar. I thought to myself, “I wonder what this parent is talking about!” The parent said, “The five-storey building will be beautiful, but it will not be completed on time!” When he said that, I understood that the parent was not talking about our school building, but about the hospital being built right next to it. I thought to myself, “If the hospital construction does not complete on time, it looks our school building will never be completed.”

Time passed quickly; it was June already. We had to vacate the old school building. We finished the lease with the old building owner. We moved the school furniture to the front yard of our new school helped by our teacher colleagues. Only the rough construction of the school was ready. We had to teach at the new building in September. Student enrolment kept on increasing. While the old students left for some reasons such as distance from their homes, we got quite a few new student enrolments.

Three days left but the construction hadn’t been over yet

There was little time left to opening the school for the new term and the construction was underway. Since we had no other choice, we prepared the first floor of the building for education. The number of construction workers increased. School supplies from Turkey had been ordered. Even though it was not ready, the first floor was arranged for education. Meanwhile, I was the director of Sevgi Dormitory, one of our two dorms in Peshawar. We had about 50 students there. We had planned to move this dormitory to the new school building. We told the students that their dormitory would then be on the upper floor of the new school building.

Three days were left. All boarding students came to the second and functional dormitory where the high school students stayed. We had planned to upgrade the boarding capacity in the second dormitory from 45 to 80, because the new school was not ready yet. When we realized that it was impossible to complete the construction on time, we used the third floor of the new school building as a dormitory. It had been painted. We made the place ready helped by our staff. We couldn’t set up the bunk beds because there wasn’t enough time. We urgently put foam mattresses, linens and pillows in the rooms. We also set up the cafeteria with tables hauled from Turkey. There was no kitchen, though. We temporarily arranged to bring breakfast, lunch and dinner from the other dormitory.

We were troubled by the water problem the most

The students came and settled in their rooms. Most were newly enrolled students. We lived with 50 students on the top floor of a school building under construction. Except for a couple of students, almost no one complained about those difficult conditions. I used to bring lunch and dinner from the other dormitory in my own car every day.

Our biggest problem in our new dormitory was the water shortage. The frequently-disrupted water supply from the mains made it difficult to live in the dormitory and care for the students. The month of Ramadan arrived and life got harder for me. Besides the iftars and dinners, I would also bring midnight meal (sehri) food supplies from the other dormitory at night. I hauled food in my own car every night during Ramadan. Most of the time, I would fall asleep from lack of sleep and tiredness before I could even eat the food I had brought to the students for sehri.

Since our school building was in the industrial zone, there were no grocery stores and markets around. Our students usually tried to get something from the nearby hospital’s canteen. They were not satisfied because the prices in that canteen were exorbitant. Helped by a few senior students, we set up a small canteen at the school. We sold the items we had bought from a wholesaler for half the price. I and a couple of teacher colleagues subsidized the difference from our own pockets. Our canteen continued like that for a few months.

Part Two: Ramadan blessings on the roads of Balochistan