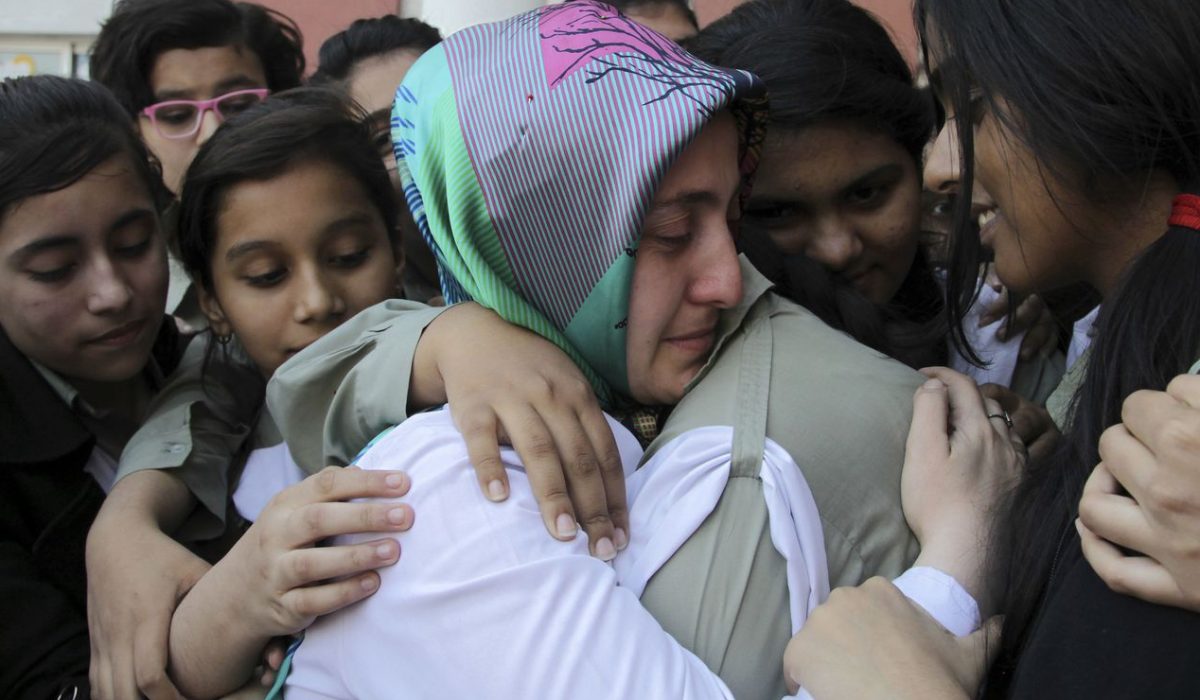 In the last episode of his memoir, education volunteer Osman Arslanhan explained the process that led to his departure from Pakistan. Conveying the parents’ sincere feelings and interesting anecdotes, the last thing Arslanhan had as indelible in his mind about Pakistan was the tears shed by female teachers.

Years of hardships and sacrifices passed, and the dream that started with a small school opened in a villa grew into 28 PakTurk campuses with more than 10 thousand students and approximately 1,500 academic faculty to become respected and popular institutions in every province of the country. PakTurk Schools were the institutions sought, expected and followed educational institutions with their Olympiad achievements, national board successes, high achievements in O Level and A Level examinations, science fairs, art exhibitions and charity programs, as well as year-end galas and events.

PakTurk management was working and generating projects for the further growth and spread of this success. One day, while I was working on one of those projects, the phone in my office rang and was connected to the fax. As a few fax pages were coming out, my cell phone rang too. The caller was a student’s relative who was a section officer in a government department. Our first words on the phone were the expressions of mutual surprise.

Pakistan Ministry of Foreign Affairs had sent a notification to all government departments, cautioning government officials against visiting the PakTurk Schools and attending the functions organized by the Schools. It was obvious that the departments were under pressure. The friend on the phone said something like “There must be a misunderstanding,” and consoled me by saying; “Such issues will be solved, Mr. Osman; we are with you.”

What did our institutions, which led Pakistan from one success to another, hoisted the colours of the green-and-white on the flagpoles of distinction, and pioneered social and humanitarian services for people, do for Pakistan other than benefit?

Among the exquisite projects planned by the PakTurk administration in the short run were a university, a medical school, a boarding school with full scholarship opportunity for the children hailing from low-income families, a teacher training centre and a succession of vocational training courses.

I had visited the office of the Secretary Education at the Ministry of Education to talk about our prospective girls’ school building in Quetta, one of our forthcoming projects. We discussed the plans for the permanent construction of our girls’ school which in those days operated in a rented building. I also saw the Personal Secretary to the Chief Minister of Balochistan in the Secretary Education’s office. When I stood up to leave after completing my meeting, the PS also came out with me and said, “Mr. Osman, let’s meet at the Chief Minister’s Secretariat in the afternoon.” We set up the schedule, exchanged pleasantries and left for our business.

‘Know this and do not be disheartened’

“Mr. Osman, Honourable Chief Minister wishes to travel to Turkey with you in his retinue. There are some people who have not been happy about this idea, so they have wanted us to postpone the visit. The Chief Minister called one of our senators in Islamabad and asked him about you people. The honourable Senator told the Chief Minister, ‘Trust those teachers more than you trust me and make sure you go on your visit by including them in your retinue. ‘ Know this and never be disheartened by what has been happening.”

These words boosted my morale and I returned to the school by uttering prayers of thankfulness to Allah. Yet, the next days were pregnant with one bitter morning after another. Our schools were made the scapegoats of a shocking political motive that first and foremost victimized our teachers. No doubt, our students were affected by those stifling and vague circumstances as well.

While looking forward to having our visas renewed, we were suddenly appalled by an official letter that stated our visa applications had been rejected. While trying to recover from the shock, we were dealt another blow by another official letter ordering us to leave Pakistan within three days. Our schools were already managed by our Pakistani brothers and sisters. Educational activities would continue in any way. However, what would happen to 108 Turkish teachers and their families?

‘I cannot bear to face you any longer’

This upsetting issue was taken to courts by some parents and well-wishers of the PakTurk Schools. Teachers were extremely worried and afraid as if they were inmates awaiting their execution. Being forced to part with their students was burning the teachers’ hearts with the pang of separation as well.

Around the evening, my cell phone rang and some parents invited me to a location. I requested my wife to continue packing our luggage and went to where the parents called me. The parents had gathered in an advocate’s office and were giving him the power of attorney to represent them in the court. They wished to see me and boost my morale. The large group of parents did not fit into the office; the queue stretched towards the staircase outside.

I managed to enter the advocate’s office with difficulty. Just at that time, I saw this scene which triggered an emotional outburst in me and others: Immediately after I entered the office, one of our parents who was a civil service official clasped his hands on his face and started to weep saying, “I cannot bear to face you any longer!” The rest of the people in the room joined him sharing this emotion. I could hardly gather myself and tried my best to console the people. All in all, whatever had happened was not their doing.

Statelessness and the most agonizing ‘Teachers’ Day’

Administrators, teachers, and parents held solidarity meetings one after another in our schools and called on the authorities to have the decision reversed. In one of those solidarity meetings, we wrote our feelings in letters, put them in a heart-shaped box  ‘as the token of our love’ and then buried it in the Pakistani soil.

One of those days when such a meeting was held, we had also applied for the UNHCR protection. We had arrived at the UNHCR Office very early in the morning and when we were able to leave after long procedures, it was already evening; we were tired and hungry and the little children kept on crying due to exhaustion.

It was around 6:00 p.m. when the UNHCR officials called us and handed each one of us a certificate. With those certificates, we were placed under the temporary protection of the United Nations High Commission for Refugees. That also meant we were left with no state. The date imprinted on the certificates was November 24, 2016. Curious, because November 24 marks the Teachers’ Day in Turkey. The last thing that caught my eyes before the setting of the dusk was the tears and sobs of some female teachers in our group…