Why was the century-old kite festival banned for 10 years? 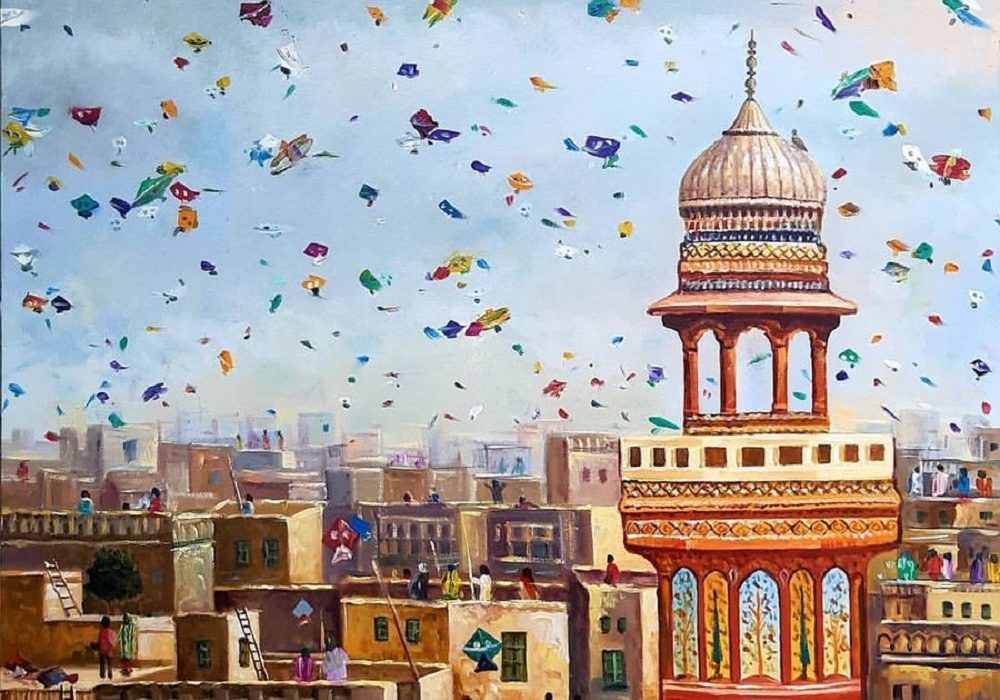 Educationist and researcher Doğan Yücel wrote about a long-standing tradition, a festival in Pakistan. He narrated the Basant Kite Festival organized to celebrate the spring, its historical roots and the cultural events held during Basant.

I arrived in Lahore at the end of August 2004. Lahore’s climate can be divided into ‘rainy’ and ‘rainless season’. The temperature in winters is generally between 15-20 degrees Celsius, close to the temperatures of Turkey in the spring months. December, January and February are months when most festivities including weddings, festivals and ceremonies are held. Our students would come to the school in the afternoons wearing yellow-orange dresses. We used to fly kites with them. Especially towards the evening, the roofs would be thronged with people flying kites. Everyone would try to cut someone else’s kite string with a cutting tool attached to their kite. Since the strings of the kites were dipped in glass powder, people would sometimes cut their hands; our students would show us their hands and where they were cut. I wasn’t very good at it, but Pakistani students were experts at cutting the strings of other kites. The kites were inexpensive; each could be bought for 5 or 10 rupees (1 US dollar equalled 60 Pak rupees then). Since the power transmission lines are above ground all over Lahore, it is possible to see a lot of kites caught on the wires during the kite flying season.

While the spring in Turkey coincides with the end of March, it coincides with February in Lahore. As of March, the weather warms up, and winds blow strong at the end of January and beginning of February. That is the time to fly a kite in a flat city without mountains and hills. I have witnessed no one, especially children, care that such an innocent recreational activity (festival) as flying kites is connected to a religion or belief. How could something that children enjoy all over the world be tied to just one belief!

The most magnificent celebrations are held in the Punjab

Basant is a kite event held during Basant Panchami (Spring Festival) in the Subcontinent. According to the Punjabi calendar, it is celebrated on the fifth day of the lunar month (end of January or beginning of February), which marks the beginning of spring. However, people also hold celebrations at other times in the spring. Basant Panchami is set according to a traditional Hindu calendar, while the Basant Kite Festival in Lahore, Pakistan, is scheduled by the authorities on a Sunday, usually at the end of February or the beginning of March.

Amritsar, Lahore and Kasur are traditional hubs where kite festivals are held. A popular Basant Mela (entertainment/convention) is held in Lahore. However, the festival is also traditionally held in cities such as Sialkot, Gujranwala, and Gurdaspur. You can see the Basant Panchami Festival all over Pakistan and India, but the place where it is most spectacular is undoubtedly Punjab. The sky is filled with colourful kites and yellow ribbons.

In places like Ferozepur, children often fly kites to celebrate this ‘auspicious’ day. On Basant Panchmi day in India, a great feast is held at Bansari and Gudri’s Shiva temple in Dhuri, Sangrur district. At the feast, kites are flown, fun and food are eaten.

Basant is actually a Hindu tradition

The people of Pakistan celebrate the Basant Kite Festival with great pomp and show. The beginning of the spring season is greeted by the reawakening of nature, by flying colourful kites in the sky. Kites come in different sizes and shapes, and some carry special prayers to the Almighty Creator. People write their wishes, prayers and respect and love for Allah on the kite and try to fly it to the depths of the sky.

The Basant Kite Festival is actually a Hindu tradition celebrated by the people of the Punjab. Historically, Maharaja Ranjit Singh (founder of the Sikh Empire) held an annual Basant Fair during his reign. Emperor Maharaja Ranjit Singh and Queen Moran dressed in yellow and flew kites on Basant. The kite-flying relationship with Basant soon became a Punjabi tradition alongside the tradition in Lahore, which continued to be the regional centre of the festival in the Punjab province. In Basant, Maharaja Ranjit Singh held a festivity or ceremony in Lahore that lasted 10 days, where soldiers wore yellow uniforms and showed off their skills. Other Basant customs in Lahore included women swinging on swings and singing. However, over time, the festival became widespread among the people of the country and has now become a festival celebrated by the country every year.

People’s clothes keep up with the yellow colour of nature

The festival also has something to do with the Sufi saints and the Sufi shrines in India and Pakistan. In the early 1800s, the Sikh Emperor Maharaja Ranjit Singh and his queen Moran would fly kites in yellow outfits to represent the beginning of the spring season. Today, many people wear dresses in different shades of yellow to welcome spring. At the time of Basant Panchami, yellow was dominant not only in the clothes of the people but also in the fields. Spring is also the time when mustard plants bloom and display their bright yellow flowers all over the region.

Before the ‘India-Pakistan division’ in Punjab, especially in Lahore, ‘Mela Panchami’ was celebrated by kite flying. Punjabi Muslims also celebrated Basant, although it was considered a local (Hindu or folk) festival. Young people from the Muslim community also participated in kite flying as an activity. At the time of the Partition in 1947, communities in Lahore were nearly equal population-wise, with 52 percent Muslims and 48 percent Hindus/Sikhs. At the end of September 1947, most of the Hindus left Lahore to migrate to India i.e., the East Punjab. However, Basant traditions continued and even today the people of Lahore continue to celebrate the Basant mela, flying kites from their rooftops with the same enthusiasm.

Despite the ban, you see kites in the sky

Basant was transformed into an international event by former President Pervez Musharraf, especially between 2004 and 2008. The event augmented Lahore as the cultural centre of the country and it was up to the Lahoris to rent their roofs for a month to those who wished to use it for kite events. The festival symbolizes the beginning of the spring season, which usually coincides with the end of January or the beginning of February. The Punjab region (including both Punjab provinces in Pakistan and India) has a long tradition of flying kites and holding festivities during Basant Panchami. This can be seen in the Potohar Plateau, near the city of Rawalpindi, where Basant is celebrated by kite flying. During the kite flying ban period, kite enthusiasts continued to celebrate the festival. According to Pakistani daily The Express Tribune, many kites and strings were kept free in Rawalpindi’s old city despite the ban in 2020. People also light fireworks and play loud music at night during this festival. With spring, the skies of Lahore become the host of this dazzling festival with kites of all types and sizes.

During the Basant Kite Festival in Lahore, various events are organized besides the kite competitions in which a large crowd of men, women and youth of all ages participate. There is a lot of shopping for tourists during this period, a variety of foods to taste, especially Pakistani dishes and desserts. Basant Festival is an enjoyable experience for the people of Pakistan and for foreigners. Besides kites, there is also great food, folk arts, folk dances and music. People fly kites standing on the terraces of houses, roofs and even on their vehicles. Lahore’s sky becomes as if it were filled with a flock of birds from thousands of kites of different shapes and colours. As the capital of the Punjab since its ancient history, there is no place where Basant Mela is celebrated with as much enthusiasm as the ancient city of Lahore. Traditionally, it was a festival limited to the city centre surrounded by old walls, but over time it spread all over the city.

It continued to be popular among Muslims as well

People also fly kites at night, which illuminate the sky in a unique way. When the Basant Kite Festival starts, it is also the time for the Basant Mela. This market hosts the sale of various souvenirs and many other events of the festival. Basant Mela becomes a crowded convention full of flowers, fruits and also sumptuous Punjabi food. The Basant Festival, where kebab varieties are the most abundant, also includes puppet shows, horse dances, folk dances, handicraft exhibitions and art events.

Basant, like several other ‘seasonal festivities’ in the Punjab, has a pre-Islamic origin. After the Partition, while many ‘cultural traditions’ in Lahore and Punjab were abruptly paused, the Basant continued to be celebrated. Although Lohri, Baisakhi and other similar festivals are on the verge of oblivion after 1947, the Basant has graced the minds of the people of the Punjab. It has preserved its existence as one of the last links of Lahore with the multicultural structure before the Partition. Thus, the popularity of the festival has increased over time, despite criticism it does not reflect Pakistan’s ‘Muslim culture’. When all other cultural festivals disappeared in the name of promoting the ‘common culture’, the people of the Punjab channelled all their energy and nostalgic feelings to the Basant.