My marriage decision and our wedding preparations

A flood disaster where truckloads of relief did not suffice!

Educationist Fatma Esra Tosun (2): I was never a stranger in Khairpur Mirs

My marriage decision and our wedding preparations 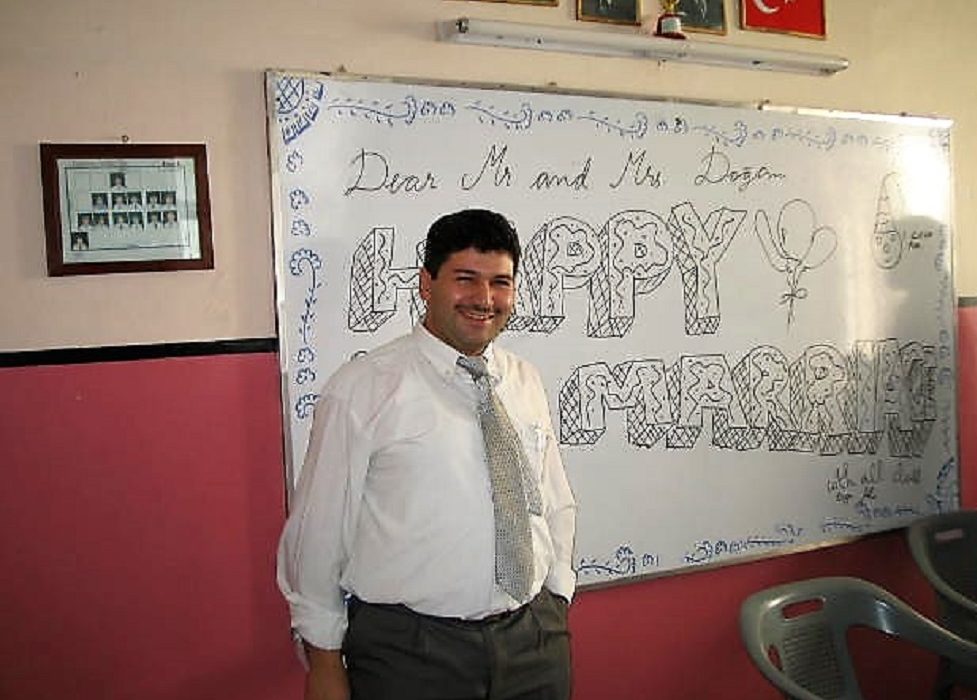 Doğan Yücel is in the classroom where he teaches at PakTürk Schools. Marriage congratulations of students on the board.

Educationist Doğan Yücel narrated why he decided to get married after a short while in Pakistan, where he arrived as single, and how he prepared for the wedding.

I graduated from university in 2004. My family wanted me to get married right away and start a home, and they wanted me to meet candidates for this. I was also offered a job in a tutoring centre in Istanbul. I also had an alternative of teaching abroad.

I left the ideas of marriage and working in Istanbul aside and went to Pakistan. When I arrived in Lahore, I found I was the third of unmarried teachers there. The food tasted different and was not to my liking at first. We had yet to have a dormitory where I could spend time with my students. Considering these, I got married in the summer of 2005. Before I had left for Pakistan, a few people with overseas experience had told me not to leave Turkey unmarried, but I hadn’t listened to them.

When I informed my family of my decision, they first suggested me to marry one relative. Although I do not remember the reason now, I did not take kindly to those offers. 15 days passed that way. Our school principal Mr. Turgut knew my marriage plans and said he would convey it to the director general of the PakTurk Schools, Mr. Ismail. The next day, Mr. Ismail called and said he knew someone in Ankara and that I could meet her if I wished.

We roamed over Ankara for engagement shopping

After that, I went to Ankara and talked to my future wife, Ms. Nazmiye. We decided to get married 24 hours later. I went to Sivas to inform my family and we planned to hold an engagement ceremony before the wedding. I had to go to Ankara again for engagement shopping. I went to Ankara with my sister and met with Ms. Nazmiye and did engagement shopping there. That day, for the first time, I understood what a woman’s disposition meant. 😊 We toured the bazaars and shops for hours. My sister and Ms. Nazmiye walked in the front and I pursued. We visited every place which dealt in wedding and engagement paraphernalia in Ankara, such as Ulus and Samanpazarı. While having dinner, we scheduled the engagement for the week next.

I returned to Sivas with my sister and completed the engagement preparations. Back then, a high school friend who worked in Antalya visited me. He had to return to his workplace after the summer vacation. My father hired a minibus and he travelled with our relatives to Ms. Nazmiye’s hometown, Afyon, for the engagement preparations. I followed with my late uncle in the car of a friend who worked in Antalya. Our engagement was officiated by my mother’s uncle, late Mahmut Hodja. After the engagement, I stayed at my father-in-law’s house. The engagement was on a Saturday. On Monday, our official marriage was officiated in the municipality. I returned to Sivas; but at the end of July, two weeks after the engagement, I had to return to Pakistan. We didn’t have the financial means to hold our wedding ceremony in such a short time.

In the summer of 2005, I took over the house of a friend who had returned to Turkey from Lahore. I bought some of his stuff. Meanwhile, I kept on paying rent for both the dormitory and the house I had taken over. This continued for 3.5 months until my wedding. Finally, I took 10 days’ leave from the school administration to visit Turkey and have my wedding. (I will not repeat the details of the wedding process here, as it was earlier published on the PakTurk File)

Once we arrived at our home in Lahore after the wedding, we had to complete the missing household items. Yet, we had no money for that. I had received my four-month salary as an advance from the accounting office. When I paid the house rent and returned the instalment of the advance, I was left with an outstanding amount equal to 100 dollars. That’s why we didn’t have any means to buy household items at first. Actually, the accountant had warned me when I had asked for an advance, but I had to.

Our house was a 3+1 portion of a bungalow. One room had been locked by the landlord. In one room we had a thin wall-to-wall carpet and a few Afghani floor cushions. In the other room was a cot. Except for the living room, we had ‘curtained’ the windows with newspapers. My father, who had covered my wedding expenses, also sent the rent for two months. After about six months, after paying the rent, we had enough money to buy a few simple items for the house. My wife was pregnant. When Lahore’s summer heat showed up, she could not stand it much longer. She had to go to Turkey. A month after she left, I could buy an air conditioner for the house.

Part Seven: Days of ‘scarcity’ and opening of a school in Islampura