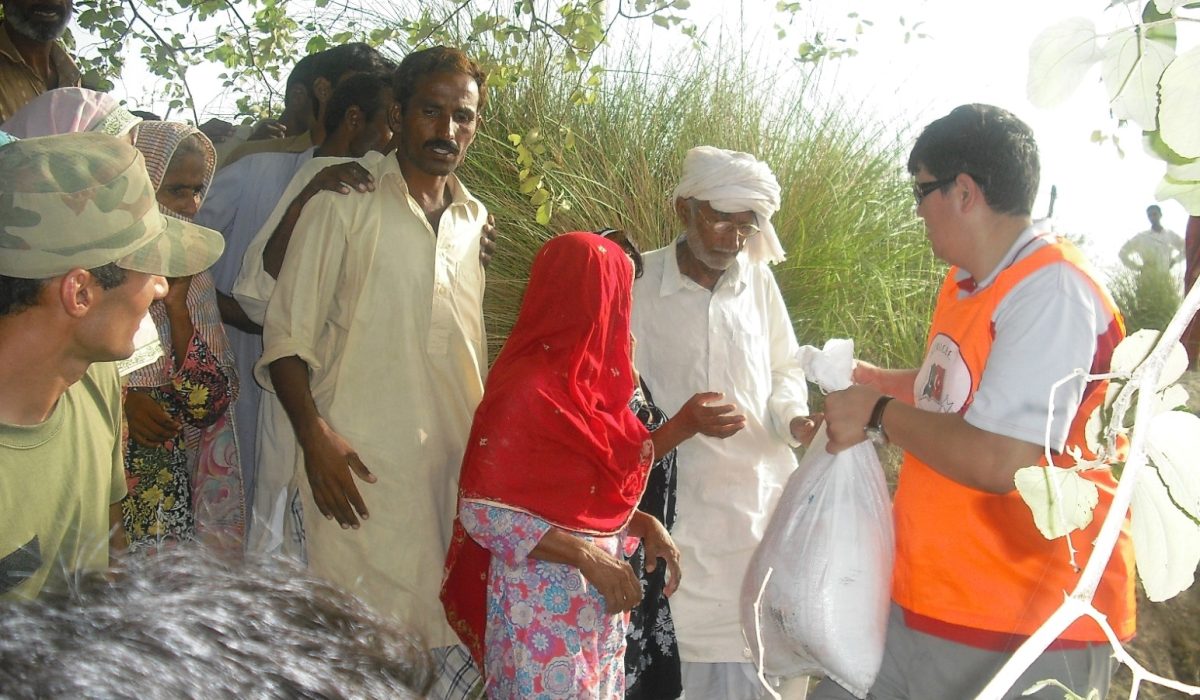 Educationist Taner Koçyiğit continues to write about the flash-flood in 2010, considered one of the most devastating natural disasters in Pakistan’s history. This time, he narrated the second relief expedition the PakTurk Schools took with more materials and how those materials had been procured.

On our return from our tour of the flood zone, we heard three officials from the Kimse Yok Mu Solidarity and Aid Association had arrived in Pakistan and were to visit the flood zone to explore urgent needs. They were staying in the guesthouse of our school. We met them and related our observations to them, giving the numbers of a few local officials who might be contacted in the flood zone. Besides the Kimse Yok Mu Association, some municipalities and aid organizations from Turkey, who knew our logistic agility in Pakistan, contacted us and received information about the conditions in the flood zone. Many associations asked “Which relief materials should be given priority?”

Once, an officer from the Istanbul Metropolitan Municipality called me and said, “We have collected a large amount of money. We wish to purchase some grains and get it hauled to Pakistan.” When he also said they planned to pack relief materials central to Turkish understanding, but were not suitable to be handed to people in Pakistan, especially in the wake of a flood, we explained the situation to them and said it would be more appropriate to buy and distribute the necessities from Pakistan with the collected aid amount. Most aid associations and municipalities in Turkey called us, listened to our suggestions and acted. What’s more, the aid collected by these organizations would also be distributed under our guidance; I will explain this in more detail later.

In-kind donations filled the school yard in a few days

Meanwhile, our parents and businessmen acquaintances had also heard about our aid appeal made on the first day after the disaster. Back then, a versatile distribution network could not be established in the country yet, because the state unit responsible for responding to disasters was not yet organized. The officials of the governmental aid agency found us trustworthy in distributing the aid; they offloaded several aid materials to the school’s front yard and informed their colleagues. The parents who donated materials said to the others, “Turks take the aid materials to the flood zone. If you wish to help the people in real need, you can bring the aid materials to the PakTurk School.” When they said so, the front yard of the school was filled with aid materials in a few days.

On our first tour, we had witnessed the magnitude of the disaster and how people desperately waited for help. That’s why we had to prepare for the second tour immediately and go back to the disaster zone with better organization and more befitting emergency relief materials. We tried to reach some officials thinking we needed to coordinate with them for an effective distribution; unfortunately, their condition was as tragic as the flood disaster. None had been prepared for such a disaster. Taking the advice of our local friends, we quickly completed the preparations for distribution. When we realized some of the in-kind donations brought to our school were not needed in the flood area, we sold them and bought two truckloads of flour with the money. We added basic food items such as sugar, oil, milk and drinking water and prepared the second aid convoy of five trucks in a few days.

We prepared, not forgetting the walkie-talkies

When we went to the flood area the first time, we had almost no idea of the scale of the disaster that awaited us. If it weren’t for the soldiers’ help during the first distribution, we would probably have brought back all the relief supplies, because there was confusion everywhere. The roads were closed, everyone thought about their survival, and even the police, who had to maintain order, did not know what to do for the devastated survivors. When we went the second time, we hoped at least the waters would have receded and the roads would have been open. We set off in the evening, still not knowing exactly how far we could go.

How far could we go if the waters receded? How could we reach real victims needing help? We intended to distribute even the smallest material without waste and be a balm for the wounds, but was the field feasible for this? We set out from Lahore with about 20 friends, asking ourselves dozens of questions like this and planning for a solution.

We followed the truck drivers’ advice

We had to deliver a trust placed on our shoulders by hundreds of people. Yet, at least, we weren’t as unprepared as the first time. In the places we had visited, we had seen the soldiers communicating on short-range wireless because the cellular infrastructure had collapsed. With this in mind, we purchased walkie-talkies as many as the number of our volunteers so we could work in coordination with one another during the distribution. We had also acquired long boots to ease our walks on the muddy terrain of the flood zone.

We were 5 or 6 volunteers during our first tour of the disaster zone. In the second time, we were a group of 20. This was why, we had to follow a strict schedule to organize the flood relief and deploy 20 volunteers efficiently. On our way to the disaster zone, with the advice of the truck drivers, we stopped at a roadhouse similar to the renowned ‘trucker restaurants’ in Turkey. As a group of 20, we attracted a lot of attention not only with our crowd but also with five truckloads of relief materials marked with banners festooning the trucks. Our convoy attracted great attention all the way. I remember eating at this trucker restaurant one of the best meat-and chickpeas stews I’ve ever eaten.

Part Thirty-Two: A flood disaster where truckloads of relief did not suffice!