Educationist Fatma Esra Tosun (3): We were tested with a bread machine on our way to Islamabad! 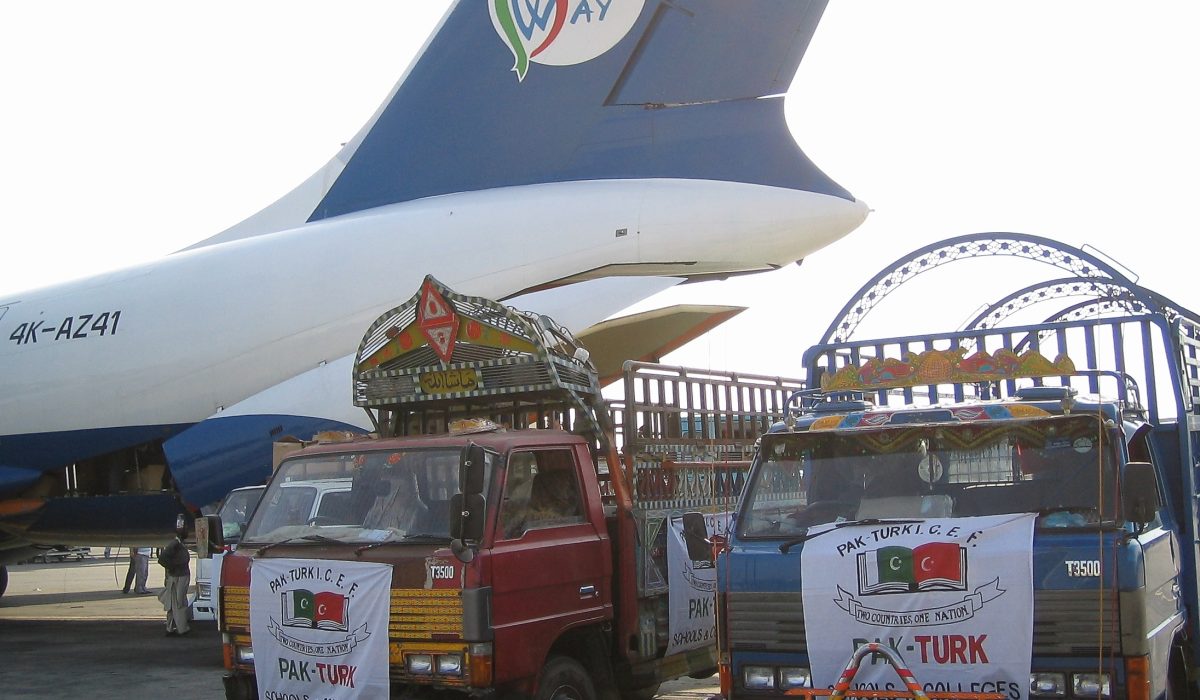 Educationist Taner Koçyiğit wrote about how the relief materials brought to Pakistan from Turkey by the Kimse Yok Mu Solidarity and Aid Association were distributed after the flood disaster in 2010. Koçyiğit also narrated the support given by the Chief Minister of the Punjab province Shahbaz Sharif for the coordinating the disaster relief distribution.

Our plan for the second tour of the flood zone was to spend the night on the road, get some rest in the morning and start distribution afterwards. When we reached the flood zone in the morning, we were both happy and sad. We were delighted because the waters had receded and we could then distribute aid albeit on muddy paths and without having to load things on dinghies. We were upset because along the way we had seen several relief trucks looted by flood survivors due to haphazard distribution. According to a local friend, some aid trucks had dumped their relief supplies on roadsides and drove back because they had not been provided proper protection.

As we approached the flood zone, security personnel stopped our convoy at a checkpoint and said, “You can’t drive further from here because they loot the trucks. Take the trucks to the District Governor’s Office and unload them there. Besides, you are foreigners and we will not allow you go further. We will not be responsible for what will happen to you!” Although we were not very hopeful, we drove to the District Governor’s Office in Muzaffargarh. We mentioned about the relief trucks to the district governor and requested him to allow us and even allocate us a region which needed the relief materials the most. That’s what happened. It was difficult to convince the governor, but we convinced him using the arguments I will explain in the next article. With his instruction, the roads were opened to our convoy. We went to Khojawalla village of Muzaffargarh as we were told. Following our visit to district governor, all the doors were opened to help us. Why did the governor trust us and believe we were experienced in disaster relief distribution and humanitarian assistance, and let the roads open? The reason was the preparation we had made with our teacher colleagues beforehand.

The call for humanitarian assistance coordinated by the Kimse Yok Mu Solidarity and Aid Association in Turkey was reciprocated with donations from generous people across Turkey. They collected abundant aid to fill a large plane in a short time and sent it to Pakistan. It was only 15-20 days after the flood disaster when the 43-ton disaster relief from the Kimse Yok Mu Solidarity and Aid Association was flown to the Lahore Airport. We waited in the airport terminal to receive the plane and meet the officials. When the plane landed, the association officials told us they wanted to deliver the supplies to the local government in Lahore, because they lacked enough manpower to coordinate the distribution. After delivering the materials, they would review the activities in the flood zone for a few days and then return to Turkey.

We cautioned them immediately saying that the public institutions did not have the full means to organize aid distribution and that the materials might likely not reach the actual flood survivors. The officials of the Association paid little attention to our words, but we had no intention of squandering those much-needed relief materials. Unfortunately, we had witnessed several scenes in the flood zones. Many materials delivered by aid organizations to the public departments had found their way to the markets to be sold before they could reach the flood survivors. There were also reports in the media that public officials had not acted meticulous on that issue.

Chief Minister Punjab: Hand Taner a key to the warehouse

We sat down with our friends and planned. We thought, “We need to visit the Chief Minister Punjab Shahbaz Sharif and deal with the distribution matter from the most authorized position”. We made an appointment by conveying the note to the Chief Minister that an expert humanitarian assistance team had arrived from Turkey on flood relief and we wished to discuss delivering the relief materials to the local authorities.

At the meeting we held with the Chief Minister Sharif, we made a presentation and gave him the list of the relief materials entrusted to the local authorities. Afterwards, we introduced one colleague to the Chief Minister, as the local representative of the Kimse Yok Mu Solidarity and Aid Association. This colleague made a request to the Chief Minister and said, “We request all materials to be distributed with representatives from the PakTurk Schools. We do not want any material to leave the warehouse without their confirmation.” Chief Minister Sharif ordered the authorities: “Hand Taner a key to the warehouse, so no one can take anything without his say. Mobilize all state resources, and provide support during distribution for whatever they need.” When he turned to me afterwards and said, “If you encounter a problem, you can reach me directly”, it was enough to open all doors. Our wish was not to shoulder a challenge, but to deliver those precious relief materials to those in real need. At the end of this meeting, we had our wish.

Warehouses grew inadequate with the volume of incoming aid

Before our second tour to the flood zone, we had a lot of valuable relief materials and some basic foodstuffs from Turkey. The warehouses at the school and the warehouses provided by the government had been full. We no longer had enough enclosed space to store these materials. We requested assistance from a businessman who owned a carpet factory and who was on the Board of Trustees of our foundation. Thankfully, he did not turn us down and allowed us to use the large hangars of his factory to stow the containers from Turkey.

Humanitarian relief supplies continued, increasing on each day. Yet, for example, we did not know how to set up the tents and how to operate the generators. We formed a technical team to set up and deliver tents to the flood survivors or to train them for setting their own tents. Formed under the supervision of Mr. Salih, this technical team immediately set up one small and one large tent in our schoolyard. They took about three hours to set up one, as the tents were large and sturdy.

The tent that convinced the district governor

While meeting with the district governor of Muzaffargarh, we had introduced Mr. Salih as the technical manager of the Kimse Yok Mu Solidarity and Aid Association, Mr. Mehmet Ali as the logistics manager and other colleagues with subsequent titles. To convince the district governor, we set up one of the prototype tents in the lawn of the District Governor’s Office within ten minutes and demonstrated how the system would work. Convinced about us hailing from a significant humanitarian aid organization, the district governor referred us and enabled opening all doors to us in the flood zone.

So, how much of these events was the Kimse Yok Mu Solidarity and Aid Association aware of? Although they did not have a grasp of the details, they knew we distributed aid on their behalf and that made great sacrifices to ensure that no relief material was lost. They had left us their vests bearing the KYM logo for use during the distribution tours.

Part Thirty-Three: Flooding relief and our second tour of the flood-struck region