Business meetings of Karachi Chamber of Commerce delegation in Ankara

On our 500th-day milestone, we still have so many stories to tell!

English teacher Gönül Barış (4): People of Pakistan are friends in need, they take care of whom they cherish

Business meetings of Karachi Chamber of Commerce delegation in Ankara 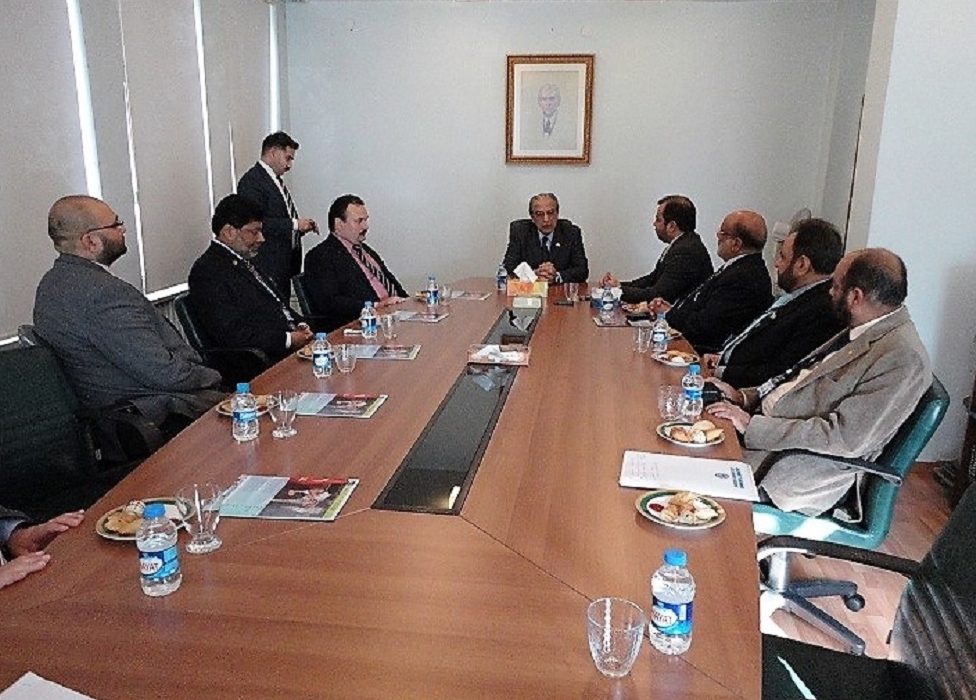 Besides teaching at the PakTurk Schools, educationist Doğan Yücel also volunteered in the businessmen’s association established to develop the trade between Pakistan and Turkey. He explained the details of the Turkey tour they organized with the president and members of Karachi Chamber of Commerce and Industry in 2011 within the scope of this volunteer work.

The meeting of the delegation consisting of the presidents and administrators of Karachi Chamber of Commerce and Industry (KCCI) with Pakistan’s Ambassador in Ankara Mr. Sardar Tariq Azizuddin was held in a friendly atmosphere. After this meeting, we visited the Hacı Bayram Mosque with our Pakistani guests, and then watched the city from Atakule, the symbol of Ankara. We ate dinner at the touristic Estergon Castle with businessmen from Ankara.

When the Turkish businessmen invited our guests to a program held at the Dedeman Hotel, we all agreed. Bülent Arınç, the then-Deputy PM and Minister of State in charge of the Turkish Radio and Television was among the guests at the hotel. At the end of the program, I introduced the KCCI President Mr. Muhammed Saeed Shafiq to Mr. Arınç. They chatted for a while and expressed the need to develop bilateral trade and relations between Pakistan and Turkey. Shafiq stated the challenges experienced by the Pakistani economy and voiced their willingness to have Turkish authorities and businesses to provide ease of market access for the Pakistani business and industrial community. Deputy Prime Minister Bülent Arınç lauded the deep-seated fraternal and friendly relationships between the two countries and pledged to undertake every possible effort to increase bilateral commercial ties.

Later, the visiting Pakistani business delegations shortly conversed with the Ankara Chamber of Commerce President Nurettin Özdebir in the same hotel about commercial issues between the two countries. I acted as the interpreter. KCCI President Saeed Shafiq emphasized to Özdebir the need for regular interaction, trade information exchange and the formation of mutual trade delegations. He said Pakistan and Turkey were two brotherly countries with strong political relations for decades, but the trade between the countries could not be compatible with the potential. Shafiq stated the urgency for continuous cooperation between the chambers of commerce and suggested signing a protocol between the KCCI and the Ankara Chamber of Industry. Ankara Chamber of Industry President Nurettin Özdebir also appreciated Shafiq’s visit to Turkey with a high-level business delegation. He also expressed his interest and will to sign a protocol with the KCCI to further develop economic and commercial ties and ensure maximum cooperation and coordination. The two presidents assured each other for effective inter-chamber liaison to achieve the desired goals. A draft memorandum of understanding was scheduled to be signed within a month.

On the second day (March 4, 2011), we visited the Anıtkabir after breakfast. We performed the Friday prayer at the Kocatepe Mosque. After the prayer, we had spicy lahmacun with spicy turnip juice at a restaurant near the mosque. There was a meeting at the Undersecretariat of Foreign Trade (DTM) in the afternoon. There we waited for the undersecretary for more than an hour. The meeting started late and ended an hour and a half later than planned.

KCCI President Muhammad Saeed Shafiq and the delegation met with the Turkish Undersecretariat of Foreign Trade General Manager of Agreements Hüsnü Dilemre and DTM Asia Department Head Süleyman Sözeri. During the meeting, Shafiq demanded the revision of the legislation on implementing the protection measures originating from the demand from the domestic industry.

Support for Pakistan despite an impact on Turkey

He asked Pakistan to be excluded from the domestic scope of the proposed protection demand. He conveyed how the imposition of additional customs measures will hurt Pakistan’s economy, already affected the devastating effects of the floods in 2010, which will adversely affect Pakistan’s exports and lead to factory closures and increased unemployment. He asked if it was possible to get any exemptions from Turkey, as the EU offered Pakistan, although the implementation was delayed for a while due to the Indian lobby. He stated that the Pakistani economy had been severely damaged and the factories operated below their capacity with employment opportunities reduced. Shafiq said Pakistan solemnly needed market access to increase its exports.

In response to the delegation he warmly welcomed, Mr. Hüsnü Dilemre, General Manager of Agreements, Undersecretariat of Foreign Trade of Turkey, said, “As soon as the EU puts its market access offer to Pakistan into practice, Turkey will make the same offer as a member of the Customs Union. Turkey already offers Pakistan a privileged customs regime.” He stated that they agreed on the potential sectors and they would definitely give support. He said some WTO members in Turkey had concerns regarding the customs practices in the EU, but they supported Pakistan’s trade. Dilemre stated the WTO’s request to the EU regarding Pakistan and that in the last meeting, Turkey fully supported Pakistan’s proposal and they believed this proposal should be evaluated. “Even though the EU’s proposal had an impact on Turkey’s exports to the EU, we supported Pakistan because it is a sister country, we could not say otherwise,” he said.

Part One: What ensued in the business trip of the Karachi Chamber of Commerce to Turkey?