Those exquisite Ramadans in Pakistan! 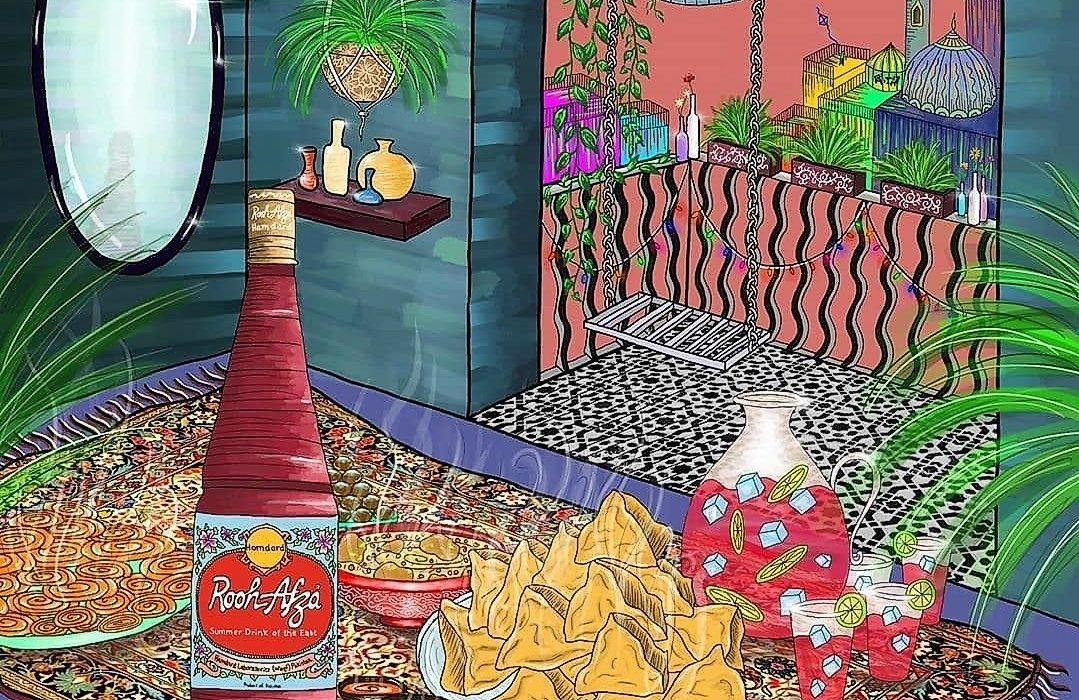 Educationist Sadık Pakdil wrote the story of Rooh Afza, which has become an indispensable gem and drink of Ramadan in Pakistan. Pakdil explained when and how this soft drink was born and what kind of a culture it has formed to this day.

Think of a drink and let it be a national treasure of your country, the strongest part of your memories, the longing for your childhood and the indispensable part of your life, and let it be the rose-scented red “lifeblood” of your life’s flow. Yes, I am talking about Rooh Afza, a beverage cherished by the people of Pakistan at home and abroad. It would be an injustice not to remember it in Ramadan. While reading this article, if it ever comes to your mind “What kind of drink is this? Is it available in my country?”, let me tell you right away: You may certainly find it if you visit a Pakistani, Indian or Bangladeshi market. Rooh Afza’s a flavour you won’t regret if you try some.

According to various sources, long before the partition in South Asia, Hakim Abdul Majid, with an education and extensive research on medicinal plants, developed a concentrated herbal beverage formula that can be produced by distilling medicinal plants, especially roses, fruits and vegetables. When the fragrance of this herbal squash wafted out of the Hamdard Lab where it was first produced in 1907, people in Delhi rushed in out of curiosity. Hakim Abdul Majid had initially concocted this beverage to address the hydration needs of the patients who sought alternative healing and relieving the fatigue and discomfort caused by the stifling heat. When the people, who had rushed in only for the fragrance of this drink, also drank some, they consumed all the stock on the first day. Although it contained no alcohol, the first tasters described the drink as ‘an intoxicatingly beautiful beverage’. The demand boomed in a short time and Hakim Abdul Majid named this soft drink Rooh Afza (Soul Refresher).

Mashroob-e-Mashriq: Summer Drink of the East

When Hakim Abdul Majid died in 1922, his wife continued the Rooh Afza production business, working hard for many years. When her children grew up, she transferred the production responsibilities to them, but leaving all the rights of the business to an endowment named Hamdard Foundation. The income obtained would be conveyed to this foundation to be spent for the people’s needs especially in education and health. After the partition in 1947, Hakim Abdul Majid’s elder son Hakim Abdul Hameed stayed back in India and his younger son Hakeem Muhammad Saeed migrated to Pakistan in 1948. Both brothers developed Hamdard Laboratories and Rooh Afza to profitable and popular entities in Pakistan, Bangladesh, and India.

Rooh Afza started production when the Hamdard Foundation was established in Pakistan and the herbal squash became the favourite drink of the people. Hakim Abdul Majeed’s younger son Muhammed Saeed had a great influence on popularizing Rooh Afza and other herbal products of Hamdard. Hakim Muhammad Saeed, who studied medicine, also had a keen vision for advertisement. He knew well this beverage should become an indispensable part of the country’s culture and habits. He also prepared the first advertisement copy of Rooh Afza and coined the famous slogan ‘Mashroob-e-Mashriq’ (Summer Drink of the East) on the advertisement poster.

The main drink of weddings, the concoction of love

Rooh Afza, now indispensable for the people in South Asia in the summer heat, spread rapidly throughout the country. Hakim Muhammad Saeed expanded his advertising efforts and negotiated with publishers to replace drinks like water and milk in children’s books with Rooh Afza. In that way, Hakim Muhammad Saeed invested into the future of his company and laid the foundations of the brand value in his vision.

Rooh Afza soon became the main drink of weddings and other summer receptions, the concoction of conversation among friends, a cool-down and rest break for tired homemakers, and even the mixed-with-milk flavour sought by the Pakistani fighter jet pilots returning from their missions during the 1965 Pakistan-India war. Rooh Afza officially ‘transformed’ the Pakistani society and became an integral part of its culture. It was such an integration that in the 80s it even become a subject of jokes: “Did your car overheat? Park aside and pour some Rooh Afza on the engine! You will see even it will cool down!”

Rooh Afza was developed with the inspiration of cooling people on hot summer days. It has thus been the indispensable summer drink to this day. Muslims in South Asia resort to Rooh Afza to quench their thirst during Ramadan and officially made it an indispensable part of the holy month. Due to the importance and priority given to this beverage until they grow up, some children even think it is sunnah to sip some Rooh Afza with dates until they realize it is true, once they grow up.

The two most important things I witnessed during the months of Ramadan are Roof Afza drink and ice blocks. They sell ice on the street, but it’s difficult to find. Due to intense demand, ice supply is usually short sometimes during Ramadan. Once, even though I roamed the market often, I couldn’t find ice. Rooh Afza is prepared by adding water on ice and the Rooh Afza herbal squash to dilute the thick syrup. Rooh Afza is the first thing everyone looks for when they arrive at an iftar. If it is there, people say ‘Oh, we’re fine’. Otherwise, it may be a cause of stress and you can read it on people’s faces.

Rooh Afza, remained unchanged in Pakistan despite changes in times and generations, and has flourished despite the influence of common soft drinks such as Coca Cola, is exported to all over the world by the Hamdard Foundation. The best thing I’ve heard about Rooh Afza lately is the slogan ‘Rooh Afza is Instagrammable’. With this slogan, customers are invited to share on Instagram the photos they take while drinking Rooh Afza in a way to increase the love in their family. Nowadays, many people listen to this call and share the photos they take with the phrase ‘Rooh Afza is Instagrammable’ on their Instagram accounts.

If you wish, for the good and gold old days in Pakistan, you too can support this campaign. Bon Appetit to all in advance…