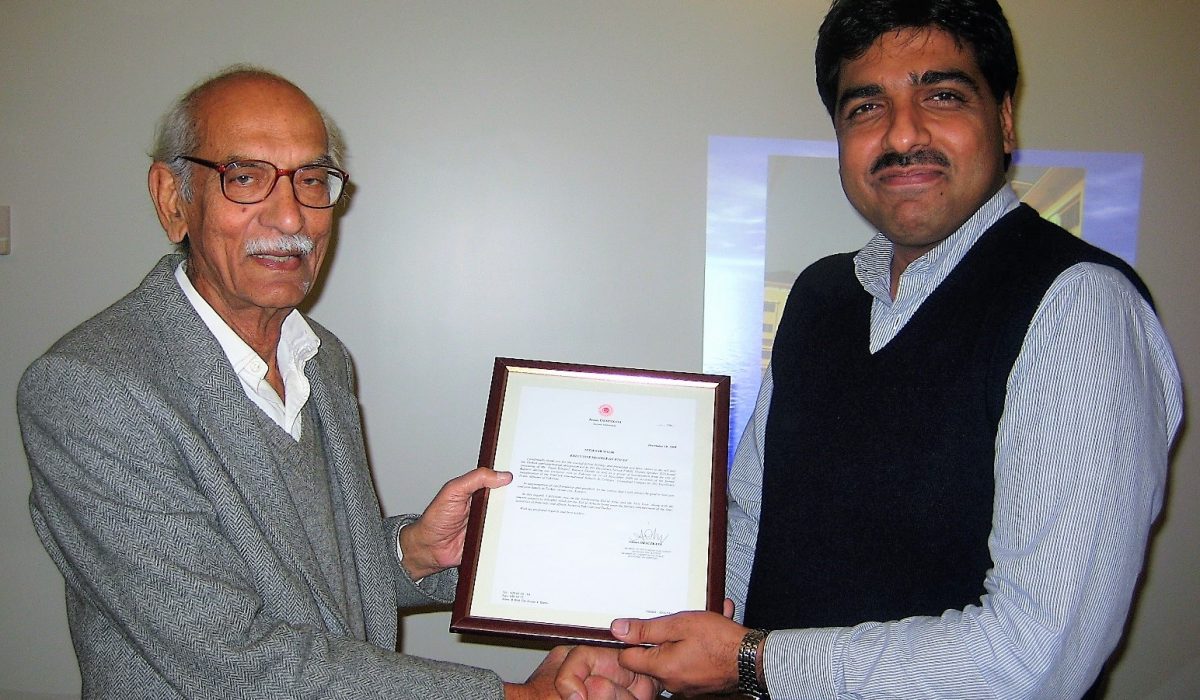 Researcher Dr. Doğan Yücel wrote about I. Malik Khan Sahib, the late philanthropist businessman from Lahore, whom he had met in consequence of a synchronicity and later become friends in fate. Yücel drew attention to Mr. Malik’s modesty and efforts that were far superior than people younger in age.

It was 2006. After the 7.6 scale October 2005 earthquake, we had received a large contingency of donations for the procurement and butchering sacrificial animals on occasion of the Festival of the Sacrifice (Eid al-Adha). The same as every year, the sacrificial animals were slaughtered in the front of yard of our PakTurk School in Islampura, Lahore. We packed meat for four days and four nights to distribute them all to the needy. We first distributed the meat packets to the recipients who arrived with the coupons we had handed to them earlier. Later, we distributed packets among those who came without coupons. When nobody started to come anymore, we started to search for places to give the rest of the meat. We learned that a foundation ran guesthouses for patient attendants next to a hospital. It was winter and it was night, and since we did not know anyone from the foundation administrators, we left the meat as large pieces in front of the hospital guesthouses.

A few days passed. Someone came to our school in Gulberg and asked about those who had left meat in front of the hospital guesthouses. We requested to know who he was and he introduced himself. It turned out that Mr. I. Malik Khan was one of the administrators of the foundation for which we had left the meat. The doorman of the foundation phoned at him and said, “the meat has arrived”. I. Malik Sahib asked the doorman who had brought the meat. After learning that we had brought it, he had the meat chopped and placed in the freezers. He came to the school to gift us small packs of saffron which he especially boxed as a token of gratitude for our philanthropy. In the days that followed, our acquaintance developed into friendship and unison in fate.

He handed out clothes to poor women

Despite his old age, I. Malik Sahib displayed such zeal and effort in philanthropy far superior to those who were younger than him. Previously, he had dealt in the production of wall-to-wall carpets. When his sons migrated to Canada, he shuttered his factory and rented some of his shops. From that day on, he dedicated himself to philanthropy and charity. Sometime later, I took a tour of his guesthouses and also visited him at his own house with my family many times.

Despite their old age, I. Malik Sahib and his wife had participated in our 2008 Turkey Tour. He provided financial and moral support to our new school building’s construction and our students on scholarship. Since we liked the local ‘Khatai’ cookies, he would mostly treat us with that. He was immensely generous, rich at heart, and extremely humble and modest. He would underhandedly gift the clothes which his wife no longer wore to the poor villager women who attended to their patients at the hospital while staying at the guesthouse under the auspices of his foundation.

He took us to the factories he knew for suitable carpets

When we had our first child, he was the first from our Pakistani acquaintances to visit us at our home to see the child after leaving the hospital. He had arrived with exquisite baby gifts. When we moved to our new school building, we rented a building owned by his son for an appropriate amount for our female students. When we needed wall-to-wall carpets in our dormitories, he took us to different factories he knew and helped us meet our needs at an affordable price. He used to come to almost every meeting and would read the books we gifted to him.

We used to gift framed Hilya-e-Sharif portraits to our acquaintances and friends. He hung that portrait at a visible spot in a room which he used as a study as well as an open kitchen. We had also given him an Urdu translation of the contents of that portrait. Once he gifted us a ticket to the sponsorship meeting of the hospital foundations and we attended to that program together. His wife and my wife jointly attended to cooking classes and reading clubs.

I. Malik Khan Sahib passed in the beginning of 2017 when he was 84 years old.