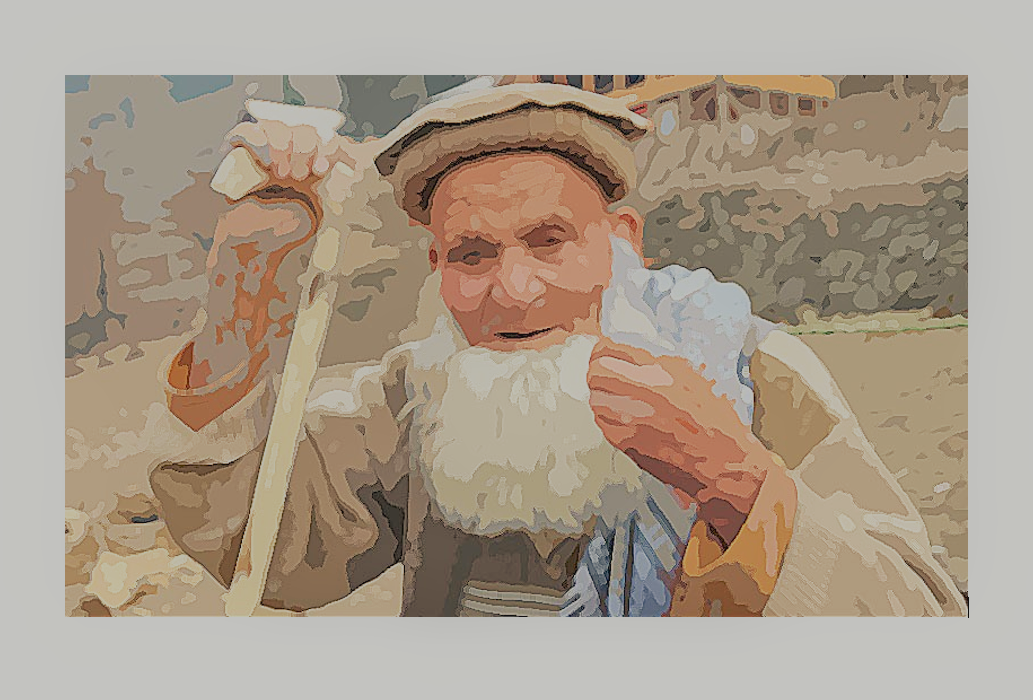 ‘Baba Noor’ is a short story by Ahmad Nadim Qasimi, one of the most prolific authors of Pakistani Urdu literature. We share the story as translated by (Late) Retired Colonel Masud Akhtar Sheikh, TI (M).

“Where are you off to, Baba Noor?” asked one of the children. In a very solemn tone, Baba Noor answered the child, “Just around the corner, I’m going to the post office for a while” and continued walking. The children burst into a loud laughter as he moved on. As he stared behind Baba Noor, Mulla Qudratullah intervened: “Laugh not, dear children!” and added “One should not laugh at someone in such circumstances. Allah is The Generous, The Self-Sufficient.”

The children fell silent for a while and when Mulla Qudratullah left, they laughed out loud again.

Baba Noor stopped when he reached to the mosque. He took off his shoes, walked in barefoot, placed both hands on the prayer niche and kissed it. After rubbing his eyes on the prayer niche in turns, he took back steps, put on his shoes and continued walking. The children scattered as if they were ashamed of one another.

Baba Noor was wearing a cloth of washed white khaddar. He also had a khaddar prayer cap on his head and, due to his pure white hair, it seemed as if he had his headgear of white from head to neck. His neatly combed white beard was spread on his chest. Baba Noor’s whiteness was complemented with pale complexion. The tiny irises in his eyes were so pitch-black that one might think they were artificial. Amidst the total whiteness of his clothing, hair, and skin, these two dots looked very strange. Yet, it was due to this strangeness that Baba Noor had a childish look on his face. He had a white khaddar shawl on his shoulder. From the place where he met the crowd of children to the prayer niche of the mosque, this shawl had changed places between his shoulders three or four times.

Standing in front of his shop, a young man asked, “Going to the post office, Baba Noor?”

The young man scolded the child: “Shoo! Beat it!” Having walked a couple of steps, Baba Noor looked back and said, “Why have you scolded the child? He’s right. I’m going to the post office for real.”

Having run from afar and gathered near, the children laughed uncontrollably and started to form a procession behind Baba Noor. Some other young man encountered them and dispersed the pack.

Baba Noor had then left the village and reached the fields. The trail would suddenly descend into the lush green fields, and Baba Noor’s speed would be greatly reduced. He walked, shielding his feet, hands, and feet from the fragile wheat. If he found any uncut wheat stepped across the trail by a passing traveller, Baba Noor would pick it up and wrap it around the wheat stalks. As if it were healing a wound, he would touch and stroke the place where the wheat was bent. When he reached the slope, he would start walking uphill faster.

Four farmers were sitting ahead on the trail, smoking hookah. A girl was mowing the grass between some wheat patches with a sickle; she did it without even hurting the unharvested wheat. Baba Noor stopped for a moment and started watching the girl. She was mowing a bundle of grass, putting it in the bundle hanging on her back and moving on with mowing another bundle.

“Well done to the girl!” addressed Baba Noor to the farmers from afar. “By God, this girl is an acrobat. So wide a field and each inch sprouts wheat. Yet the girl’s sickle cuts the grass and does not touch the wheat. Whose daughter is this?” Later, he asked the girl, “Whose daughter are you, my dear?”

The girl turned and looked. Meanwhile, one of the farmers said, “She’s my daughter, Baba.”

Baba Noor seconded, “Yours, eh?” and walked towards the farmers saying “She’s very intelligent. A great farmer, as well. May she live long!”

The girl’s father asked, “Where are you going today, Baba?”

Another farmer butted in, “Are you headed to the post office?”

Baba Noor stood nearer to the farmers and replied, “Yes. I thought I should go and ask if any mail had arrived for me.”

Without saying anything more, the farmers gave him way and Baba Noor continued his walk. Before he could reach to the other corner of the field, the farmer girl shouted from behind: “Would you like to drink lassi, Baba Noor?” Baba Noor looked back and smiled for the first time since he had left the village.

“I would, my dear daughter,” he said. He hesitated and added, “It’s better to be quick. The postal clerk is always in a hurry. I’d like to reach before he leaves for somewhere else.”

The girl took the bundle of grass off her shoulder and placed it on the field. She ran to a low fruit free by the slope. She held an earthenware pot from there, shook it well, filled an aluminium bowl with the yoghurt drink and rushed to Baba Noor’s side.

Baba Noor tipped the bowl in one go and dried his lips with his shawl. He prayed, “May your fortune be as white as this lassi, my daughter” and walked on.

Sitting in the veranda of the village school, the postal clerk was filling the daily forms and was also talking to the villagers around him:

“My brother-in-law used to work as a peon in Karachi. When he died, I had to go to Karachi to recite the Fateha to his soul. Friends, even if you have to be the donkey of a cart there, you must see Karachi once in your lifetime. The cars there are more than the sparrows in our village. Oh Allah! Only Allah knows His wisdom! How so very beautiful women drive in those cars! What’s a poor servant got to do in the land of fairies? One simply bows in awe to Allah’s might. One cannot help but rise right at once and stand up in Prayer. According to what a millionaire says, if another war erupts, Karachi will leave even England behind in development. They said a couple of times that a war was around the corner, but that did not happen. They said each time someone prevented it. They say a war will lead to many deaths. Tell me for God’s sake, will people not die if a war does not erupt? If a war happens, they will die of bullet wounds and if a war does not happen, then they will die of hunger. Isn’t it so?”

One of the villagers said, “So be it,” and added, “Sir, leave that and tell us about this first: When are you going to reduce the per envelope postal fee?”

Looking to a distance to enlighten the villager about this question, the clerk’s stare suddenly seemed fixed to the horizon. He turned pale. He mumbled with a withering voice, “Baba Noor’s coming.”

Everyone turned back to look. They too went pale. The children rushed to the doors and windows of the village school and whispered inside, “Baba Noor! Baba Noor!” The postal clerk scolded them and made them sit immediately.

Baba Noor in his whites was approaching steadily to the school veranda. The people were frozen as if they were swathed in an unspeakable terror. When he reached at the veranda, Baba Noor asked: “Mr. Clerk, did the mail arrive?”

“I wonder if there is any letter to me from my son?”

Baba Noor went mute and turned back to leave. He walked on until he became a white dot stretching on the path leading to the horizon. The people were appalled and they kept on staring at him in the distance.

Finally, the postal clerk broke the silence: “He’s been coming here daily for the last ten years and asking the same question. He’s been receiving the same answer and returning the same. Poor old man! He cannot remember! I had read to him an official letter saying that his son had been killed by a bullet in Burma. Since then, he has lost his sanity… but gentlemen, if this man comes to me with the same question once again, I swear he will drive me mad too!”

(*) Ahmad Nadim Qasmi was born in 1916 in Soan Sakesar, Pakistan. Qasmi wrote his first remarkable poem in 1931 when he was a high school student as an elegy on the occasion of the death of Muhammad Ali Jauhar, one of the leading figures who laid the foundations of the civil activism and ideals which would later become the Pakistan Freedom Movement. After the publication of this poem in daily Siasat and laudations from the prominent literati including Allama Dr. Muhammad Iqbal, Qasimi continued writing poems and short stories until his death. With his total nine poetry books and more than twenty short story books, Qasimiu won many literature awards and also worked as an editor in some of the prominent literature magazines in Pakistan and penned columns in many Pakistani dailies. Died in 2006, Qasimi’s works centre on topics such as freedom, equality, fraternity, democracy, liberal thought and social justice.

Born in 1928, Retired Colonel Masud Akhtar Sheikh TI (M) translated the story of ‘Baba Noor’ into Turkish. He published more than 26 books, including the translations of Turkish and Urdu works and the compilations of his columns and academic articles in Turkish, Urdu and English, He played an important role for the recognition of the Turkish literature in Pakistan and was awarded for his contributions to the languages and literatures of Pakistan and Turkey. He breathed his last in March 2020 in Islamabad, Pakistan.