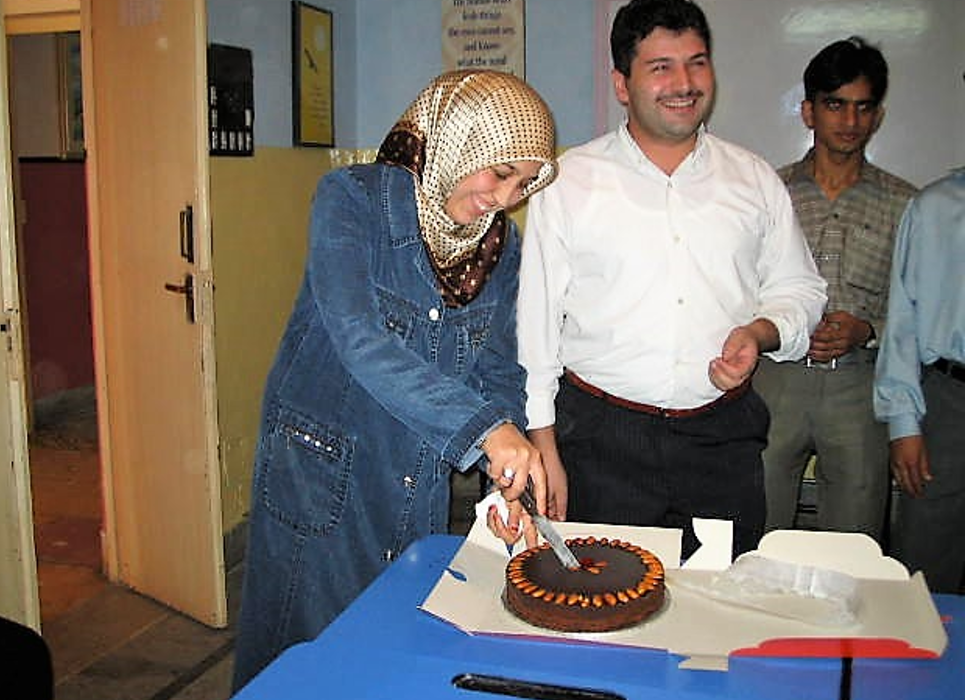 Known by PakTurkFile readers mostly for his cultural research articles, Dr. Doğan Yücel wrote the story of his marriage this time. The extraordinary events that Yücel went through during his 9-day wedding leave are no different from scenes from a movie.

It was the summer of 2005. It was July, and it was Monday. As conduced by one of my close acquaintances, I met my wife-to-be in Ankara. We said “Yes, we do” to each other a day later. A week later, we were engaged. A day after our engagement, we signed the official documents and had our marriage registered. However, since I had to return to Lahore a week after the engagement, not much time was left for holding a wedding. I rented the house which was vacated by a friend, who had returned to Istanbul for good three months earlier, and also purchased some of the household items he had left behind for delayed sale. Later, with much insistence, I managed to get a 9-day leave between November 5 and 13 to visit Turkey. Within that time bracket, we had to complete our wedding ceremony and return to Pakistan as well. I was one of the two teachers who had married in the summer but had to return to Pakistan before managing to organize the wedding ceremony. I arrived in Turkey on Friday morning and on Saturday, we held the wedding ceremony in my wife’s hometown. We returned to Istanbul on the next day. On Sunday, we held another wedding ceremony in Istanbul. Next, we started preparing for our flight to Lahore.

Consul General could not solve the visa issue

I visited the Consulate General of Pakistan in Istanbul on Wednesday. I had a single entry visa which was valid for four months and – having left Pakistan – I had to get a new visa. The front office clerk at the Consulate told me they would not be able to issue a new visa before the expiry of the previous one. I explained to him that I was a teacher and I worked in Pakistan, and that I had to come to Turkey to get married. After talking to the clerk, I also talked to the Honourable Consul General about the same issue. I showed him my visa and he told me that my visa was no longer valid as I had left Pakistan for Turkey and that they would not be able to help me in any way. I decided to get a new visa from the Embassy of Pakistan in Ankara on the next day. As conduced by an acquaintance, I managed to access one of the MPs of the ruling party in Ankara and explained the issue to him. Later, I received a phone call from the Embassy of Pakistan and I explained the same to the official there as well. Eventually, the Third Secretary at the Embassy of Pakistan in Ankara told me that I should visit the Consular Section on Monday and receive my new visa. With that, we changed the schedule of our flight from Sunday evening to Monday evening. I took an intercity bus from Istanbul to Ankara on Sunday evening.

A taxi fare much pricey than an air ticket

When I visited the Consular Section at the Embassy of Pakistan in the morning, the clerk told me, “Sorry, we have no means for issuing visas at the present. Our visa officer went to the Turkish Republic of the Northern Cyprus yesterday with his official seal and visa stamps to carry out the procedures of the students there!” When I insisted, the officers there cancelled my previous visa. They signed and stamped a new visa on my passport, but could not imprint it with an official emboss. They advised me, “Try it at the airport, and maybe you will be able to pass through. If not, you may get another visa after two days when the visa officer returns.” After all those procedures, it was already the afternoon. The only way of making to the plane scheduled to take off from Istanbul at 7:00 pm on time was to take a flight from Ankara to Istanbul. I took a taxi to the airport which was 40 kilometres away from downtown Ankara The fare I paid to the taxi was much pricey than the air ticket from Ankara to Istanbul in those days. I still remember that. Just as I arrived at the airport, I rushed inside the terminal to get a seat on the first plane to Istanbul. I encountered another surprise: A fire had erupted in the Domestic Departures terminal and all flights were suspended.

A ticket appears 10 minutes before the take-off

When the passengers insisted a bit much, they started to direct the domestic flights from the International Departures terminal. I even did not have any ticket! It was 20 minutes until the Atlasjet’s departure for Istanbul. If I found a seat on that flight, I would arrive at the Ataturk International Airport, meet my wife there, and manage to reach to the Lahore flight together on time. I rushed to the ticketing officers for a ticket, but they sternly rejected. I went to the Atlasjet’s operations manager and told him that I would like to pay for the ticket lumpsum and requested him to board me on the plane. He directly entered my name in the flight manifest and handed me a boarding pass. 10 minutes were left for the take off. However, the crew took me on board in almost no time.

At the Ataturk International Airport in Istanbul, I met my wife on time. Both of us had 76 kg baggage allowance including our cabin bags. In the queue in front of the check-in counter, there was a delegation going to Pakistan for providing emergency relief after the October 2005 earthquake. We requested them to enter a part of our luggage on their tickets. We added, “We are newly married and we are taking some home items to Pakistan. Would you please assist us?” but they did not agree. As a result of our lengthy efforts, we finally had to pay 150 US dollars in total for 30-kg excess baggage. A little time was left for the flight.

An acquaintance on board!

After boarding on the plane, I saw someone sitting across our seat. I knew him: He was the Punjab Minister for Excise and Taxation, who lived on the same street across from our school in Gulberg, Lahore. Since he knew Persian, he would occasionally visit our principal and chat with him in literary Persian. Since I sometimes used to participate in those discussions, Minister Sahib recognized me. We had a long flight ahead, so we exchanged greetings and had a short chat. He was dealing in trade and had been on a trip to Europe and Turkey. In those days, the only direct flight to Pakistan was from Istanbul to Karachi and vice versa. When I had rescheduled the tickets, our PIA tickets from Karachi to Lahore had changed too. When we arrived at the Karachi Jinnah International Airport, we requested an immediate transfer flight to Karachi. The ticketing officers told us to wait three or four hours because the soon-to-depart PIA flight was packed full. However, Minister Sahib said to the officers, “This couple are my guests” and so the officers told us we would opt for boarding the plane by paying the class change fee for two of the seats allotted for the emergency flights taken by the state officials. They labelled our baggage as ‘Priority’ and did not charge anything extra.

Homecoming in an ‘official car’

During our flight to Lahore, Minister Sahib asked me whether someone would welcome us there or not. I told him we did not expect anyone to welcome us. Having heard that, he told me that he might have us dropped to our residence with the official car that would come to pick him from the airport. Actually, he was to go to the Ministry in Gulberg and our residence was on the way. Into the trunk of the Minister’s official car, we loaded our luggage weighing approximately 120 kg and took a ride until our residence. That made us extremely happy. We are still indebted to him. Hence, we managed to reach our home in Lahore on Tuesday morning.

The surprise at the school that made us ignore exhaustion

Until the evening, we were busy with cleaning and shopping. When we visited the street butchers for chicken and beef, my wife actually realized to where she had come J. On Wednesday, I restarted my classes at the school. Some days later, we saw the teachers at the school had prepared for us, the four newly-wed couples, welcome cakes. On the same day, I showed a classroom to my wife. I wonder how they had heard about it; the students had written on the board: “Mister and Missus Dogan, Welcome! Happy Marriage!” They made us so happy as a couple; it was one of the most exquisite gifts we had received after the exhausting process.