I could not forget the way the students were saying, “Teacher, don’t go!” 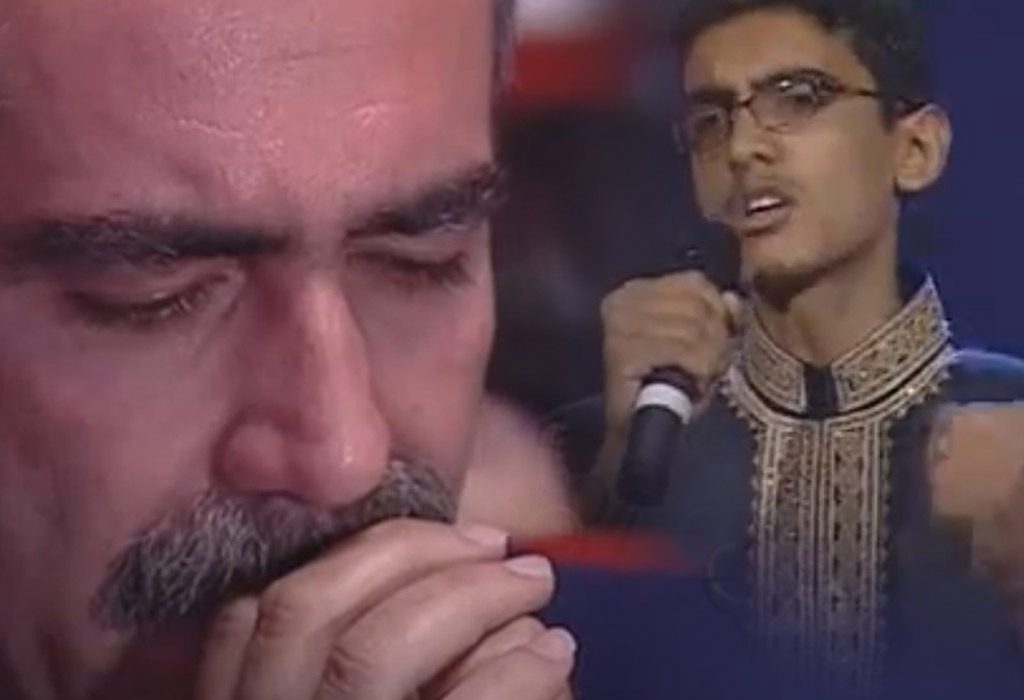 Muhammad Salman, the Pakistani high school student magnificently sang the Turkish song ‘Bu Adam Benim Babam’ (This Man is My Father) at the 2009 Turkish Olympiad and brought the song’s composer Fatih Kısaparmak to tears. Writing the backstory of that success, Muhammad Salman’s Turkish teacher Mesut Uygar stated that year as his first to prepare a student for a Turkish Olympiad and explained that they were selected as the winner of the song category in the world finals thanks to their meticulous practice and the constant support from their proficient friends.

In July 2008, I decided to go to Pakistan as inspired with the ideal of “emigration”. I was to work as a Turkish teacher in the PakTurk Schools in Islamabad. I completed my preparations and set off. When I got on the plane, I was a little surprised by the smell of spicy food on board. When I landed at the Islamabad Airport, the heat was scorching. Terrified; I brooded how on earth would I be able to work there. On the other hand, I was aware that “mercy was bestowed upon those who showed effort”. At first, I had a hard time – as most Turkish teachers experienced it – but thank God, I got used to it quickly.

We immediately started selecting students for the Olympiad by finalizing which students would compete in which category. Competing in the Olympiad was a means for students, and the end was to help them learn and love Turkish in the best way possible. We were three Turkish teachers at the Islamabad PakTurk Boys Branch. We made a task division for the categories among ourselves. I was to prepare the students to compete in the song category.

He was almost eliminated due to his tall height!

For shortlisting the song contest candidates, we decided to listen to the students in the boys’ dormitory within the school campus. Of course, I was not alone. As four Turkish teachers, we listened to the students in the dormitory for an entire week. Students who could speak Turkish sang in Turkish and those who could not, sang in Urdu. At the end of the week, we shortlisted 15 boarders. At the end of the one-month trial, 6 were eliminated and 9 remained. Among those 9 students, there was one with a different voice: Muhammad Salman, a Grade 9 student who spoke very little Turkish. We had him sing a little in Turkish and some more in Urdu. His voice was thick and full. When he first entered the hall where we made the auditions, Muhammad’s tall height and the local dress he wore – shalwar kameez – had caught our attention. We were prejudiced at first: “Nothing will come out of him!” Well, that lasted until we heard him sing his song in Urdu. Muhammad’s voice was similar to the tone of Turkish performers like Hakan Taşıyan, Fatih Kısaparmak and Ahmet Kaya. After listening to him, our opinion changed immediately and we decided to include him in the competition.

We held consultations among ourselves and came to the conclusion that Muhammad Salman might sing a song from Fatih Kısaparmak’s repertoire. Although I am unable to recall now, I think we gave Muhammad another song of Kısaparmak first. Over time, the song “Bu Adam Benim Babam” (This Man is My Father) dominated and I gave it to him to memorize. As far as I know, Muhammad listened to the song at least 1,000 (thousand) times and read its lyrics 1,500 (one thousand five hundred) times. Of course, some glitches were there; but overall, it was fine. I gave him this assignment: “No matter where you are; either in the garden or at home, in the dormitory or during the breaks, you should always listen to the song!” Actually, he was a little bored because his Turkish was not good and he also could not fully grasp the meaning of the Turkish Olympiads. We asked another student whose Turkish was better to help us explain the meaning of the song to Muhammad. After that, Muhammad continued to practice more and more enthusiastically every day.

Excitement and stress prevailed as the finals approached

In those days, I and my other single colleagues were living in a rented house in a sub-district named Chatta Bakhtawar, which was 45 minutes away from our school. At least four days a week in the evenings, I went to the school dormitory from Chatta Bakhtawar, sometimes by a taxi but usually on foot, to practice with Muhammad. Of course, it was difficult for me. Frankly speaking, I was never intimidated because I knew I was accumulating memories which I would later remember by saying, “Those were the days!”

One day, as the Turkish teachers of our school, we decided to listen to Muhammad in the conference hall. When Muhammad started humming the song with a naked voice on the stage, I was excited and elated like everyone else. Some teacher colleagues said Muhammad’s voice was self-same with Fatih Kısaparmak’s. Mr. Halit, our school principal, advised us to participate in the competition with Muhammad and the song “Bu Adam Benim Babam” (This Man is My Father). We continued in line with those recommendations.

Later, Mr. Mehmet said I could ask Mr. Lokman’s assistance for the background music of the song. Mr. Lokman contributed a lot in the preparation of the background music. I thank him again very much. Turkish Olympiad Pakistan Finals were approaching fast. We had completed the student qualifiers for the final and selected three students from our school for the song final. One month before the final, we started teaching Muhammad how to use his body language in sync with the lyrics of the song.

We bought a long-coat named Sherwani, traditionally worn by the high officials on formal occasions and grooms during marriages in Pakistan, for Muhammad to wear in the finals. It suited him very well. As the finals approached, not I and Muhammad but also the other teachers at our school increasingly felt the thrill and stress of the forthcoming program.

The finals gala had finally arrived. Muhammad was very excited. Songs were performed one after another on the stage of Islamabad Cultural Centre. When it was Muhammad’s turn and the time he broke into his song, a flood of applause broke out from the hall. My knees were trembling with excitement. When the song was over, the hall resonated by applause and happy smiles settled on everyone’s faces. I hugged Muhammad, who came to me after singing the song, and I could not hold back my tears. I had a feeling. We would get the first position. And so, it happened; my feelings did not mislead me.

When the program host announced Muhammad Salman as the winner of the song contest, we were overwhelmed. That year, our school won the first place in five categories. Mr. Mehmet congratulated Muhammad and me. Actually, I had only guided Muhammad Salman. Everything happened with the grace and help of Allah Almighty.

Since Muhammad Salman was in Grade 9, he had to appear in the Matriculation send-off examinations on the same dates he had to compete in the Turkish Olympiad; this jeopardized his participation to the program abroad. This issue was discussed with the school administration and resolved. In May, together with the other students to compete in the world rounds, our journey to Turkey started. My colleague Mr. Kenan accompanied us. First, we stayed at the Asya Thermal Hotel. Later, we went on city tours. Wherever Muhammad took the stage during the city tours, he fascinated people and he was given the nickname ‘Baba’. The audience used to cheer, “Baba! Baba!”

We gathered in Istanbul as the Team Pakistan when it was the time for the world finals of the 2009 Turkish Olympiad. We were very excited on the final evening. Fatih Kısaparmak was among the invitees to the gala. While Muhammad was singing his song, Kısaparmak launched into a duet, and even got emotional and wept. The MC then invited Kısaparmak to the stage where he shared his feelings with the audience. He hugged Muhammad before leaving the stage.

Actually, I did not deserve that award!

I was trembling with excitement when the final results were announced. When the MC proclaimed, “The winner of the song contest is Muhammad Salman from Pakistan!” neither I nor Mr. Mehmet could not hold back the tears of joy.

Some cabinet ministers and members of the Turkish Parliament too were among the invitees of the program. In addition to the awards for the top achievers in the song category, “the five most devoted Turkish teachers” were to be given awards as well. Under normal circumstances, Mr. Mehmet had to be invited to the stage, but he had my name announced. Actually, I did not deserve that because I was just in my first year of teaching. I was very happy but my feet were bouncing back as I moved towards the stage. When a minister presented me a plaque on the stage, a voice inside me said “Mesut, this is not yours!” When they handed me the microphone, I said: “Honourable Minister, respected Members of the Parliament and dear guests! I would like to thank the Turkish Olympiads Organization Committee and all of you for conferring me this plaque of recognition. I would like to say that I do not deserve this plaque. Mr. Mehmet, to whom I am indebted and owe a lot for not sparing any assistance throughout, deserves this. I would like to convey this plaque to him and so, I invite him to the stage.”

When I finished my words, I still could not hold back my tears. When he came up the stage, Mr. Mehmet was also touched and pointed at me saying, “He deserves this plaque!” We left the stage hugging each other. May my Lord Allah Almighty bestow everyone with the opportunity of meeting people like Mr. Mehmet.

After the Olympiad, the students returned to Pakistan in June. What we experienced there has been engraved in our memories as unforgettable memories. I would like to thank everyone, all those whom I have mentioned or forgotten to mention here, who contributed to that success.