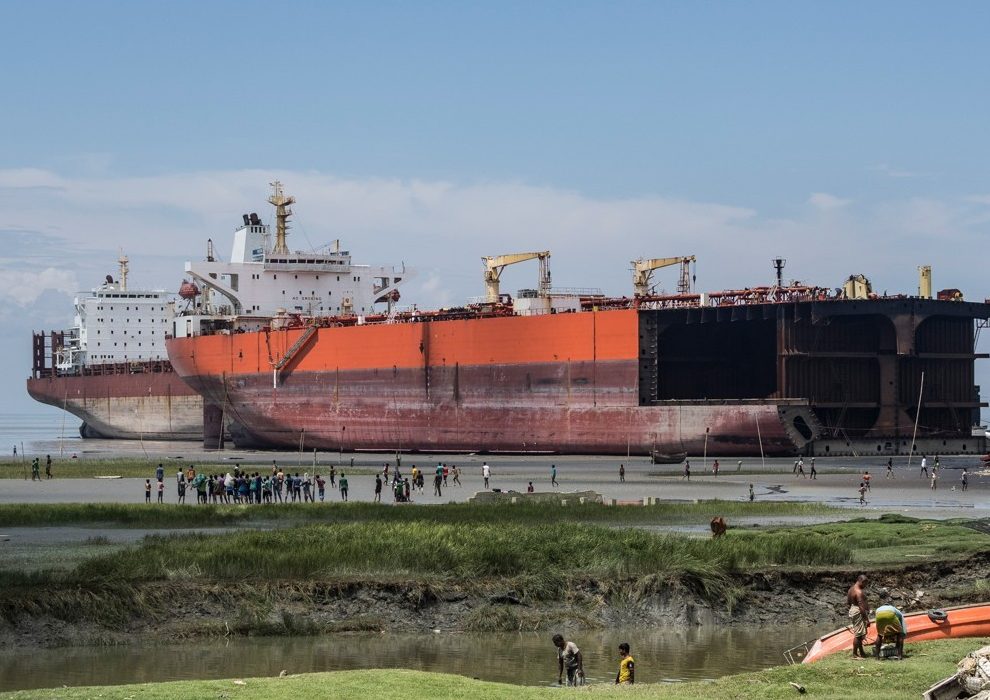 The Gadani shipbreaking yard is the third largest shipbreaking site in the world, located on a 10 km coastline along the Arabian Sea in the southern Pakistani town of Gadani. Comprised of 132 ship dismantling plots, this shipyard is located approximately 40 kilometres northwest of Karachi, Pakistan’s largest city.

The small ship dismantling and scrap iron trade, carried out by some of the locals on the Gadani coastline before the independence of Pakistan in 1947, became widespread with the serious efforts of some entrepreneurs after the Independence. Although until the mid-1970s the Gadani coastline did not have the necessary infrastructure facilities, including roads, public services, accommodation and medical services for workers, the Pakistani Government recognized the importance of the gains of people and entrepreneurs in Gadani and its periphery, especially since the 1960s, for the shipbreaking industry and the economy. This resulted in the building of a port in 1978. In addition, the import duties imposed on the ships to be scrapped were reduced, while the federal and state task forces were set in order to solve the infrastructure and logistics problems. The period between 1969 and 1983 is still considered the golden age of the shipbreaking industry in Pakistan. In the 1980s, ship dismantling facilities in Gadani provided direct employment to more than 30,000 workers, while more than half a million people indirectly made a living through their services to companies that used ship scrap as raw material.

Gadani, which was defined as the world’s largest shipbreaking area at that time, fell to third place in production capacity with the opening of India’s Alang and Bangladesh’s Chittagong shipbreaking facilities. After the increased competition and the heavy import duty on the dismantling of scrap ships in Pakistan, a serious decrease in scrap production ensued. The facilities, which produced an average of one million tons of scrap in the 1980s, started to produce less than 160,000 tons per year as of the early 2000s. A period came and after the complaints of industrial workers who could not find a new ship to be dismantled for at least ten months, the Pakistani government reduced ship dismantling taxes from 15% to 10% in 2001 and provided different incentives. These measures have been effective, boosting the workforce to a total of approximately 6,000 workers, with a gradual increase in employment.

Employment and production have been revived in Gadani, where more than 6000 workers now work 24 hours a day and 7 days in shifts. Most of the scrap metal is exported. At the facilities where approximately 80 to 110 ships were dismantled annually in the early 2000s, 125 ships of different sizes, including super tankers, are annually being broken down to yield millions of tons of scrap iron and steel.

Gadani, which is the world’s third largest shipbreaking site in terms of size, is indeed termed as the world’s most efficient shipbreaking site. While it takes 30 to 45 days to break a 5,000-ton ship in Gadani, it takes an average of more than six months in India and Bangladesh to break a similar-sized ship. The ships-to-be-broken are first stranded on the shore by sailing them full speed to the coast, then they are broken into smaller pieces gradually with the help of minimal machinery and manual labour, which is much flexible and inexpensive than the machinery. The more their weight decrease, the more ships are pulled nearer to the shipyard plots where they are further broken.

All useful materials obtained from the breaking of ships in Gadani are fully repurposed and reused. While scrap parts are primarily exported, they also meet most of the metal raw material needs of Pakistan’s construction industry. Oil and other waste collected from the reservoirs and left-over barrels of the giant tankers are stored for sale in the market. Furniture and finishing materials of the cruise ships are also reserved for different purposes. Although they work for a very low wage at the Gadani shipbreaking shipyard where giant tankers and cruise ships are scrapped on shore and reduced to metal sheet, pipe, and corner iron raw materials, workers can find jobs as long as they are willing, regardless of whether they are novice or experienced. Workers, inheriting jobs in father-to-son or sibling-to-sibling manner, toil for around 1700 rupees (US $ 11) a day and are also exposed to many lethal risks during shipbreaking, most notably asbestos poisoning.

During the breaking of the oil tanker Aces on November 1, 2016, an explosion took place due to the ignition of oil residues and barrelled fuel in the compartments, burning at least 14 of the 100 workers to death. While 59 workers were seriously injured by different degrees of burns, approximately 30 others were volleyed to the sea by massive explosions and went missing. Similar to the Romanian tanker Independenta, which collided with a Greek freighter in Istanbul in 1979 and burned for days, the tanker Aces tanker burned for days in Gadani.