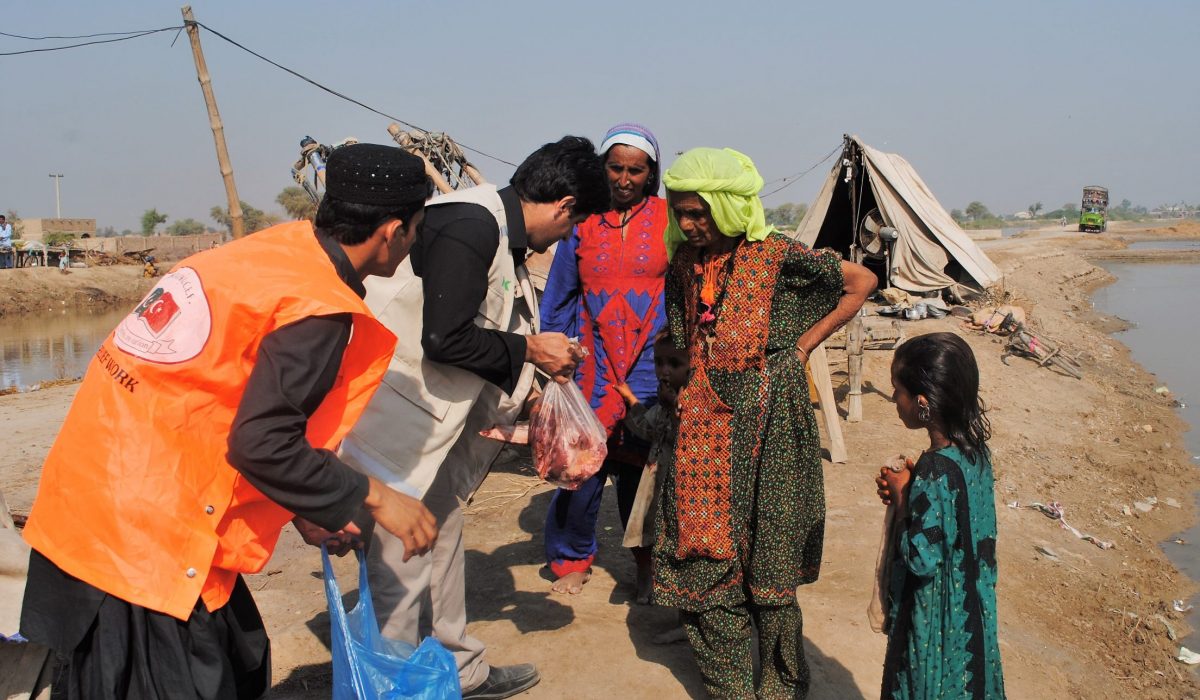 (*) In  2006, Metin Keskin, a journalist working in Germany, had covered the humanitarian aid tour organized after the devastating October 2005 earthquake in Pakistan for the Ailem (My Family) Magazine. The sacrificial animals which were donated by the Turks living in Europe on occasion of the Eid al-Adha were slaughtered in the earthquake-hit regions through the collaboration between the Kimse Yok Mu Solidarity and Aid Association and the PakTurk educational institutions to distribute the meat obtained to the Pakistani earthquake affectees during the Eid al-Adha. We republish Keskin’s article – originally published in the Ailem Magazine on March 11, 2006 – along with the impressions stated by a group of Turkish philanthropists who had participated in the tour.

Friendly and brotherly country Pakistan was hit by a massive earthquake on October 8, 2005. Approximately 100,000 people lost their lives in the earthquake of which epicentre was in Kashmir and which left more than 3.5 million people homeless in its wake. These people in need are now struggling for life against death in harsh winter conditions. Pakistani earthquake survivors were quickly forgotten after a little aid response from the world in the wake of the earthquake. However, the Turkish people opened their hearts to the people of Pakistan who had not forgotten about the people of Anatolia during their National Struggle. People across Turkey displayed an exemplary stance of loyalty both during the first days after the earthquake and in the days that followed. This was because the grandparents of these blessed people of Pakistan had expressed the same magnanimity by supporting the people of Anatolia during the Turkish National Struggle (1919-1922).

We perform the Eid Prayer in a mosque on a peak of the Himalayas. We take our ablutions in ice-cold water in icy weather. We line up behind the imam on a mat in the courtyard of the mosque and listen to the recitation of the Surah ad-Duha as we perform the Prayer. The expressions in the Qur’anic verse, “Your Lord has not forsaken you, nor has He become displeased with you… Therefore, do not oppress the orphan; nor chide and drive away the petitioner…  And as for the favour of your Lord, proclaim it!” transform us to another realms.

They had not received meat for a long time

Although months have passed since the earthquake, the pain and agony are still fresh while the debris of the collapsed buildings remain. We see a crumpled mosque, but people teem with life and cling at life despite everything.

Dozens of butchers had been assigned to slaughter the sacrificial animals and butcher their meat into smaller pieces for distribution. The sacrificial animal shares, donated from all over the world and especially from Europe, have been grouped into neat lists consistent with specific sequence. Within the frame of the sacrificial procedures, which started around 10 AM, the animals are led to the area where they are slaughtered one by one: They are laid down gently on the ground and the names of 7 shareholders are read for each cattle before the sacrifice takes place through the recitation of “BismillahiAllahuAkbar” by the butcher. Butchers in turn chop the meat into smaller pieces to be finally filled into packs weighing three to four kilos by the volunteers. The volunteers also distribute the meat packs one by one to the earthquake survivors accommodated in the tent cities.  Vehicles are used to distribute the meat packs in distant settlements.

The earthquake survivors, who were not able to receive meat for a long time, are delivered their meat packs in this way. All shares entrusted to be distributed to the earthquake survivors are executed with the utmost and the sincerest effort, without leaving any room for the slightest misappropriation. When we witness the scenes there, we understand better how the people who opted for having their sacrificial animals slaughtered in Pakistan performed an exquisite deed and obtained great benefit by means of donating even a single share.

The things I mistook as wood were cattle legs!

A Pakistani boy of 12 or 13 years was hurrying with a bunch of wood in his hands. I thought he was carrying wood to his house which was not completely destroyed. When the boy approached, I realized he had not been carrying wood. He had embraced the ten of the hundreds of cattle legs we had just slaughtered and set aside; he was trying to take them home. Perhaps he or his parents would cook something from those feet and feed on them for – and Allah knows how – many days. Shortly before seeing that boy, I also had not been able to take a photo of an old man, who had carried a cow hide on his shoulders, due to my shame. The boy’s image completely drained my courage. I could not take any photo. Carrying the cattle feet, he disappeared before my eyes into the darkness.

We encounter dozens of different events during our tour to Pakistan that lasts for about a week. Sometimes we cannot hold back our tears and at times, we plunge into sadness and joy together. In the meantime, it should be emphasized that the unsung heroes in ensuring the arrival of the aid to their merited addresses are nearly 100 Turkish teachers who work in the PakTurk Schools in this country. They fascinated us with their extraordinary efforts.

Aids delivered to the deserving

We went from Germany to Pakistan as a group of 41. There are 4500 villages on those peaks of the Himalayas that are 4000 metres above the sea level. We went there and supervised the slaughtering of the sacrificial animals and the butchering and distribution of their meat among the needy. That made the people of Pakistan very glad. There are missionaries, organ mafia and some others who fake humanitarian  aid there. However, the people of Pakistan trust in the PakTurk Schools. It will not be an exaggeration if we say “PakTurk has become the definitive brand of humanity, altruism and trust there.”

Hearts and souls were put into the selfless work

We witnessed how the humanitarian assistance teams hailing from Turkey and Europe put their hearts and souls into their efforts despite harsh conditions. The sacrificial animals slaughtered here were distributed by the Turkish nationals to the earthquake survivors living in the tent cities.

I was afraid when I got into the cable car

The prevailing poverty had become rampart in the earthquake-affected zones. I personally witnessed how significant and crucial the humanitarian assistance that had been delivered to the earthquake-affected zones were. We participated in the distribution of the sacrificial animal meat and other relief packets at different locations. The road network in the region was in poor condition. We managed to cover a 100-kilometre distance in 5 hours. Moreover, a village could only be accessed through a primitive cable car which was built by the villagers themselves. Even though I had hesitated at first, I mustered my courage and got into the cable car to lead the group. While slaughtering sacrificial animals we were assisted by the PakTurk Schools in Pakistan. Having been very well organized, these schools made a vital contribution to delivering the meat packets and other relief materials to the distant villages in the earthquake-affected region.

We will never forget your assistance

We slaughtered the sacrificial animals at four different locations including Muzafferabad, the capital city of the Azad Kashmir province. Two of our teams were dispatched to the mountain villages. We handed to a widowed mother of seven, who lived with her children in a tent, the box of money collected and donated by the little children in Gladbach, Germany. The mother shed tears and said, “You have stood by us on our hardest day of trouble; we will never forget your assistance.” In the tent cities erected by the Kimse Yok Mu and PakTurk Schools, thousands of children are provided assistance. The training centres opened in the tents teach tailoring to women. There are tent schools that cater to the education of the children and the youth there.