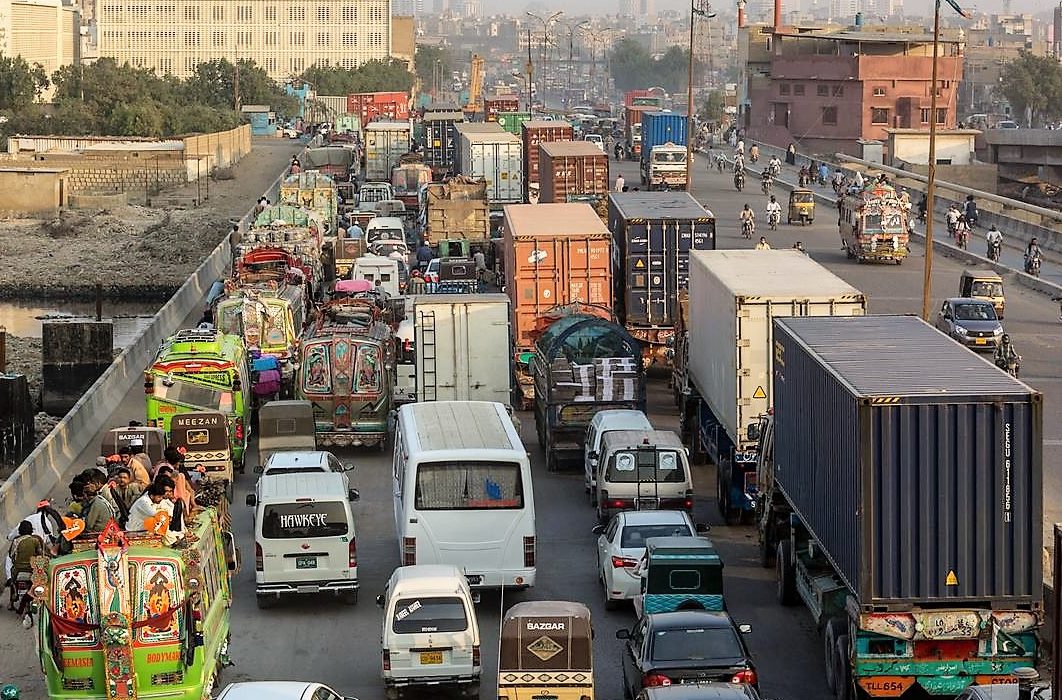 Traffic in Pakistan is an adventure in itself. When we, as hundreds of people hailing from a friendly but other country stayed in different cities for a quarter of a century, we also accumulated lots of memories full of thrilling adventures. This article does not speak for just one of us, it indeed speaks for all of us. We wished narrate and share some of our memories in different cities. What we are going to narrate here are real life experiences that makes different people smile when they remember them. We are unable to write them all. Some of those memories will be told both in this world and in the next. Most of those memories will remain as stories which we will remember with fond smiles “in the hereafter”, consistent with our belief.

Karachi’s most important link with the northern cities was through the highway between Karachi and Hyderabad. I was driving through the Al-Asif junction – known as the Karachi exit – on my way to visit a businessman who dealt in recycling. In front of me, two trucks were driving one after the other. I wanted to gain speed and overtake them. Just as I accelerated and made a move for overtaking them, the truck in front swerved to overtake the other truck. Of course, the truck driver had not spent much time learning how to use the side mirrors and the indicators on his vehicle. I hit the brakes for dear life so much so that I heard a loud screech from the brake-locked wheels. My car came to a halt just half a metre before it would roll down the culvert between the two highway lanes with edges bordered with stones. I hit the road again, but this time I kept on hearing a loud scraping noise from the car. I found a suitable shoulder on the highway and stopped. That time, the noise stopped too. When I moved the car, the noise continued all the same. Anyway, I drove slowly to my destination.

When I told him what I had experienced on the intercity highway, the businessman told his driver to come and check my car. The driver showed me that the sidewall of the left front tyre had been pared by 20 to 30 centimetres. If that tyre had been punctured, my car would have flipped over and hurled me into the culvert along with itself. We put on the spare tyre right there and then. I immediately donated a goat to be sacrificed as a consecration to thank Allah Almighty for saving my life.

It was during the first half of 2005, which was also the second year of our marriage. We had some guests at home. When there was still some food more than we could ever eat on our own, I wished to take it to my colleagues who lived in the dormitory of our school. I had purchased a new motorcycle in that year. With my wife on the pillion, I rode the motorcycle to the dormitory. After handing the food boxes to the security guards to be delivered to our colleagues, we started our return journey. A Suzuki car drove very slowly in front of us and I wanted to overtake it. There was a road bump and a street entrance ahead. Just as we sped up and rode over the bump, the car suddenly turned into the street. Of course, we could not stop and we rammed into the driver’s side with our motorcycle. I and my wife were catapulted to the side of the road. The driver of the car had been busy on the phone and he had not cared to check his mirrors to see who were behind 😊. Later on, we took the motorcycle to a mechanic. Since we were wearing helmets, both I and my wife were safe. That incident taught me once again the vital significance of wearing a helmet and flashing the indicator in a timely manner.

We usually were those who sat in the four-seater at the back!

In 2002, we would wear our suits, leave our house located in a slum of Peshawar, and wait for the bus at a stop opposite to the Gul Haji Plaza. Since that stop was exactly on the halfway of the route, only the back seats in the bus would be empty. The four-seater at the back of the bus were propped higher than the other seats. Some passengers who climbed up and down the roof of the bus along the way would – whether they liked it or not – step on the shoulders of those who sat in the back four-seater. (Since those who had boarded on the bus from the previous stops knew this fact, it was usually us who had to sit in the four-seater as backbenchers 😄) Almost every day, the shoulders of our suits were embossed with multiple footprints.

Since it is very hot in Pakistan, only the air-conditioned buses are fitted with windows. Especially on rainy days, our ordeal would become more distressing as passengers would step on our shoulders with muddy footwear. Getting off the bus at the nearest stop to our school was an altogether unique adventure. The bus would not stop; it would simply slow down. It was each passenger’s own responsibility to get off the bus without falling head over heels. 😊