Teacher Zübeyde who was welcomed with roses in Quetta (2): I do not wish to change Pakistan’s place in my heart 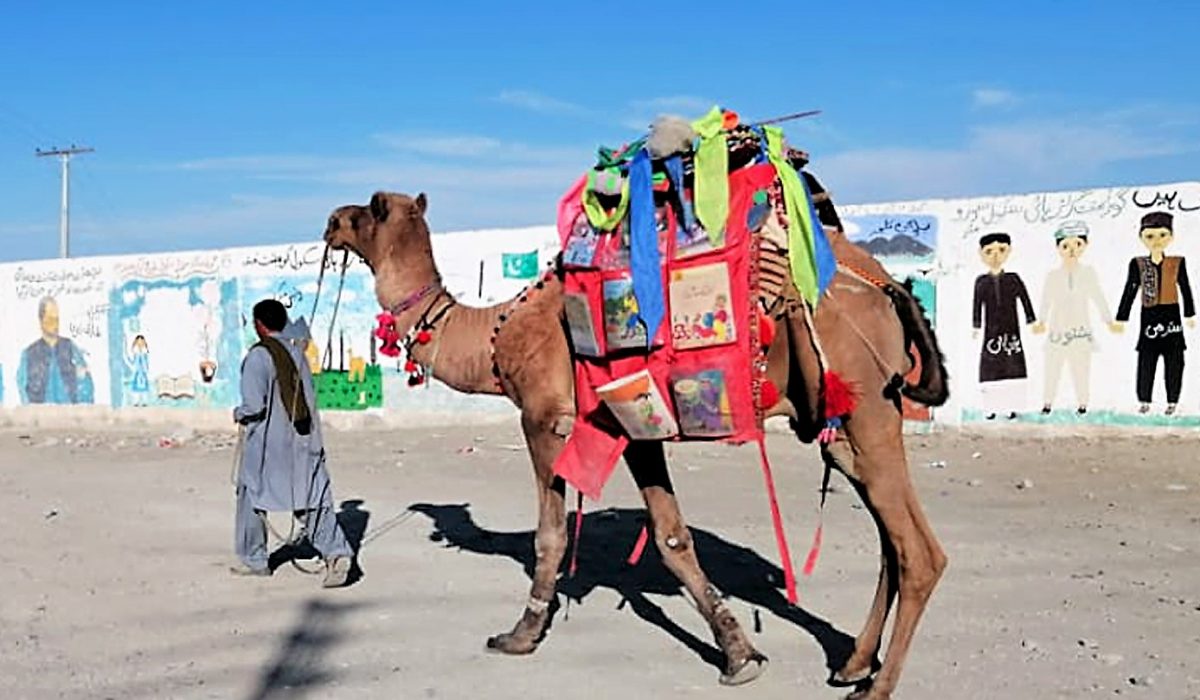 Two sisters living in Pakistan’s Balochistan Province developed an interesting project for village children who could not reach the books due to the Covid-19 pandemic. The sisters took the “Mobile Camel Library” to the doorsteps of the children who got disconnected from the books after the closure of the schools last year. A local camel rider shepherd has been carrying books to six villages since March 2020 with his camel named Roshan. The books hauled on camelback are popular with adults as well as children.

This project, which made the news in various local media outlets last year, was not limited to pandemic restrictions and attracted the attention of the world media. Leading media outlets such as the Reuters and The Guardian shared this news with their subscribers yesterday. The news, which attracted the attention of the whole world after its coverage by several outlets, was widely shared on social media platforms.

According to the news report published in The Guardian yesterday with the by-line Shah Meer Baloch, there are volunteers in Balochistan, where the schools remain closed throughout the Covid-19 pandemic, who provide mobile library services to facilitate students’ reconnection with education.

Balochistan, Pakistan’s most impoverished province, has a male literacy rate of 56 percent, while the female literacy rate is 24 percent. The province also and sadly has the highest percentage of children out of school in the country.

In addition to all these bleak conditions, when all schools were closed in Balochistan due to the coronavirus epidemic similar to the other provinces in Pakistan,  two women from the Mand region in southern Balochistan – Zubaida Jalal, a former federal minister of education, and her sister Rahima Jalal, the headmistress of a public high school – came up with the idea of using camels to facilitate the students and adults who are unable to access education facilities.

Followed the examples in Mongolia and Ethiopia

Saying, “Our idea of using camels originated from the examples in Mongolia and Ethiopia,” Rahima Jalal adds, “Camels face no compatibility issues with the desolate and rough terrains across the provinces. After using them in this project, we received a highly positive feedback from the people.”

The books that are hauled to distant towns and villages have been donated by the Alif Laila Book Bus Society, a non-governmental organization that provides mobile library services in Lahore. Following the highly positive feedback to the first round trials, the mobile libraries that move on camelback will deliver its services to the distant regions of the Balochistan province for each three months from now on.

The number of volunteers who support this project with their camels and expertise from different regions steadily increase. Fazal Bashir, one of the coordinators of this library project, says, “Parents and children are very excited. This project gives them the hope that all of them will be able to learn how to read and write,” and adds, “Our personnel endeavour for mobilization on this issue so that we can reach more regions.”

Zubaida and Rahima Jalal explain the substantial attention shown to this library project from different parts of the province and state that a new mobile library has recently been introduced on a camel named Chiragh for Gwadar, a coastal city in southern Balochistan, and its peripheral towns and villages. With its driver Abdul Qadir and the volunteer library officer Ismail Yaqoob, who is a school teacher by profession, Chiragh visits five towns and small villages every week.

The library’s tours are awaited enthusiastically. Quoting an example to this, Ismail Yaqoob narrates the incident when one of the village children called him on his phone and reproached him by saying, “Why didn’t you come with the camel?” while Yaqoob had to attend to his class in the school on that day. Yaqoob adds, “They were waiting for me to bring them books. Children are closely interested in reading and their school subjects, but unfortunately, the state does not invest in education adequately.”

Sharatoon, who had to leave her school and her books after getting married at the age of 15, is now a 27 year old mother of four, the oldest of whom is 11 years and the youngest is 11 months only. She is extremely happy for being able to access the mobile library which arrives in the saddle panniers full of books on a camel named Roshan visiting her on every Friday in her small town located in Mand region 19 kilometres away from the Iranian border. She reads the books she frequently borrows to both her own children and the other children in town.

Children are so happy since the arrival of the ‘camel’

Sharatoon says, “Since the day when this mobile camel library arrived in our town, children have been very happy and thrilled. The schools in our region have long been closed due to the coronavirus pandemic, and we also do not have any libraries here. This is why, this mobile library initiative has been welcomed by all children with great happiness. Children await the arrival of the library with full enthusiasm; they also like reading books and asking me questions from the information they find in the books. As for me, there must be more books on science, so that our children can learn by doing experiments.”

The camels and the library volunteers, who stay in the homes of the local people who enthusiastically support this library project in each visited village and town, facilitate all children and youth aged between 4 and 16 in the region for jointly reading and borrowing books.

10-year-old Anas Syed Mohammad, who lives in the town of Abdul Rahim Bazar, located about 48 km from the city of Gwadar, which has developed into one of the most popular coastal settlements in Pakistan in recent years, is a Class 4 student. Anas, who has been reading a different book every time since the camel library started visiting as of the first week of February, says, “I really liked reading Khazane Ki Talaash (In Search of Treasure). I discuss these books with my friends.”

10-year old Jawad Ali, who aspires to become a teacher in the future, says that he has learned new things from the books he borrowed from the camel library and adds, “I read stories. I understand photo stories. I want to read more books. There are English and Urdu books as well as books written in Baloch, my mother tongue. We want more books. We want more libraries and schools.”

Remembering Mustafa Guzelgoz, the Librarian of the Mobile Donkey Library

The ‘Mobile Camel Library’ in Pakistan brings to mind a similar practice carried out in Turkey during 1940s. A librarian named Mustafa Guzelgoz was appointed to the Tahsin Aga Library in Urgup district in 1943. When no books arrived to the library despite many months after his appointment, Guzelgoz generated an interesting solution. He convinced stubborn bureaucrats with much difficulty to purchase a donkey and also commissions two wooden chests to be saddled on the donkey. Labelling the chests with the sign ‘Book Loan Chest’ and filling them with approximately 200 books, he visited one village after another and facilitated citizens for reading books. The fame of Mustafa Guzelgoz the Librarian of the Mobile Donkey Library first reached to the Nevsehir province and then across the country. Mustafa Guzelgoz passed away in 2005. After his death, a statue of Guzelgoz showing him with the book chests on the library donkey was erected in Urgup district.