Turkish Teacher Ayşegül Karahan (2): I wished my children to grow up in Pakistan 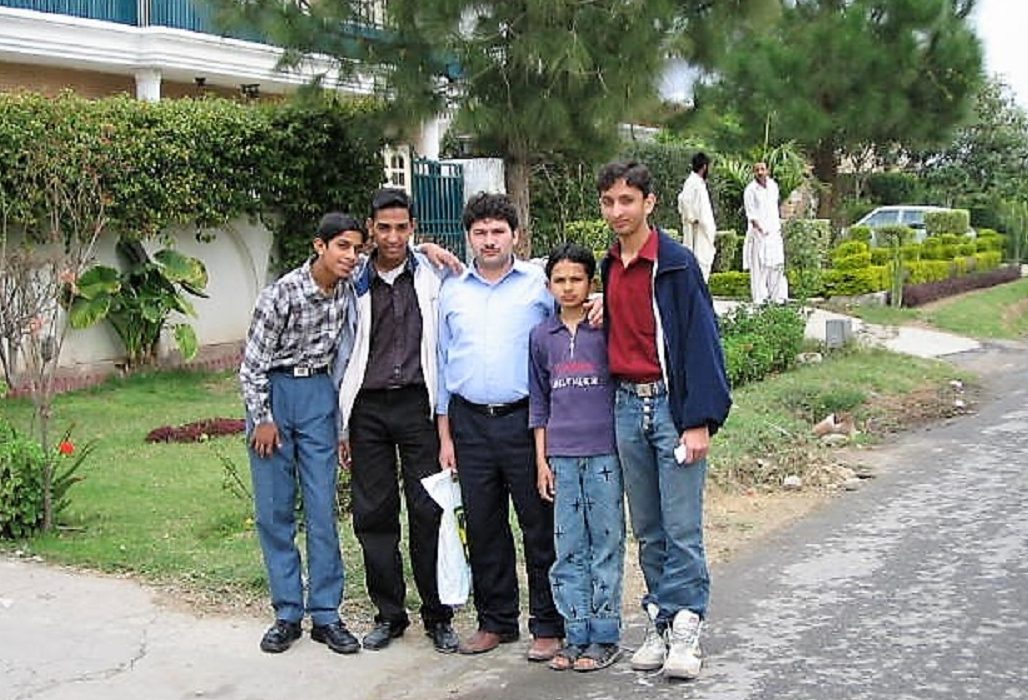 Turkish teacher Doğan Yücel, with his students in his first assignment in Lahore...

Doğan Yücel, who decided to teach abroad right after graduating from the university in Turkey, wrote the story of his migration to Pakistan. Yücel dreamt of going to a warm country because he was from Sivas, and Lahore, which was an extremely hot place, was destined for him by the Divine Providence.

I was in my last year of university in 2004. In the beginning of July, I had to pass the exams of a course of which final exam I could not give in the winter semester. I passed that exam on June 5. The officials in the Student Office immediately prepared my diploma. It was also in the same June when my maternal grandfather passed away and I could not attend to the funeral because of the finals.

As soon as I graduated, I received an offer to work in a private exam prep and tutoring centre in Turkey. Moreover, my parents and relatives wanted me to get married and start a new life. I had even attended to the teacher orientation seminars organized by the tutoring centre which had offered me the job. I don’t know why, at that time I wanted to go abroad. I had a desire to be beneficial for people at large. Other friends of mine had also gone abroad. I even insisted a little on the people who mediated the overseas appointments. Eventually they said, “Okay, if this is your final decision!”

Two days before I was to start teaching at the exam prep and tutoring centre, I conveyed my decision for teaching abroad to the concerned. First, they told me, “You may go to Turkmenistan or Yemen”. I thought to myself, “I’m from Sivas, I experienced bouts of cold, let me go to a country where it is a little warmer.” As I was late in deciding for an overseas teaching post, I had to wait a little longer for the passport and other procedures. In July, I attended to an “overseas teacher training workshop” in Istanbul. I spent a week with about 25-30 teacher colleagues who would be teaching Turkish abroad. We formed good friendships. Since we had not calculated earlier that we would need sports shoes during a teaching workshop, we played football on the AstroTurf field every day as barefoot. Experienced colleagues who conducted seminars were very happy that one of our friends who had graduated from the Fatih University would teach abroad. In the workshop, we practised teaching Turkish to foreigners.

My mother reluctantly consented for my going to Pakistan

After the workshop, I went to our village to help my father in the harvest. I also conveyed my decision to my parents and siblings. At first, they did not take that decision very warmly. I said, “I will stay there for a year or two, learn a foreign language, receive a master’s degree and return”. My mother reluctantly agreed.

In the meantime, I applied for a passport. My father covered all expenses. However, at that time, passports would be issued in no earlier than 20-25 days. While waiting for the passport, I talked to the director general of the PakTurk Schools on the phone. He told me I should be in Islamabad by August 1. However, I could not reach Pakistan on that date because my passport had not been issued yet.

When my passport was ready, I immediately informed the school administrators. I was told that I would take a flight to Pakistan on August 26. I went to Istanbul, stayed in our own house there for a couple of days, and met my relatives. At last, it was the day for the flight. On board, there were seven other Turkish educationists who were travelling to Pakistan for the first time in their lives. There were eight of us in total, including two married couples.

So many people are named ‘Şükriye’ in this country!

Ours was a connecting flight and it was also my first time on board of an aircraft. First, we landed in Doha, the capital of Qatar, where we had a five-hour stopover. I had never experienced the heat I felt in Doha between boarding off the plane and taking the shuttle bus to the airport terminal. It was as hot as steam hitting your face when you entered the bath on a winter day. At first, I and my colleagues thought the heat was coming from the plane’s engines, but the weather was really that hot. One of our colleagues had forgotten his passport on his seat on board. We dealt with the crisis of having it safely returned for two hours. Airport officials brought the passport from the aircraft and handed it to him. Later, we took our connecting flight to Islamabad.

The first word I heard and noticed in Urdu was ‘Shukriya’, which initially rhymed for my ears as a Turkish name: Şükriye. While thinking, “How many women named Şükriye in this country? Why do everyone call one another with that name?”, I later learned the word Shukriya meant ‘thank you’ in Urdu. We landed in Islamabad on a Thursday. Mr. Harun welcomed us. He quickly recognized us either because of our appearances or our coming out as a group of eight. We had also brought some stationery and school supplies with us. “Are you Turkish?” he first asked. When we said “Yes”, he led us and we all got on a small minibus. We drove to the head office of the PakTurk Schools. We met and were introduced to Mr. Ismail, the Director General of the PakTurk Schools. We chatted him for almost two hours.

I was the form teacher for only two students

In those years, the airport was not in Islamabad but in Rawalpindi. That was why we travelled for about 20-25 kilometres to Islamabad. It was Thursday and I was told I would be working in Lahore. Having heard that, friends in Islamabad said to me, “Lahore is a beautiful place.” We toured Islamabad on Thursday and Friday. We prayed the congregational Friday prayer at the Faisal Mosque and also climbed to the Daman-e Koh to view the city from the Margalla Hills. On the Saturday morning, Mr. Ramazan drove me and a couple who were to work in Lahore to the Daewoo Bus Terminal. We bought our tickets and set off for Lahore.

When we arrived in Lahore, Mr. Hüseyin, the vice principal of the primary school in Gulberg, received us at the bus terminal. He took us to his house and offered us treats. We went to see the school building in the afternoon. Yet, the school building was not at all like what I had imagined. I expected the school to be a campus with large buildings and dormitories like those in the Central Asia. However, it was a school building repurposed from a large two-storey bungalow. It was an old bungalow with a garden; the school also did not have a dormitory. In the classroom where I was the form teacher, there were only two students, a girl and a boy. The school had two buildings. The building in front had the primary school, and the building behind was for the pre-school and the primary classes 1 to 3. After seeing the school building and meeting my colleagues there, I settled in the house where a group of single teachers lived in the Defence Housing Society.

I was disappointed when I first saw the school

I was deeply disappointed when I first saw the school in Gulberg. I had dreamed of “large buildings, dormitories where we may cater to our students’ academic and moral development, and fields where we can play football.” When I expressed this dream there, I think it was vice principal who remarked by a sort of tongue-in-cheek manner, “Some teachers like us were instrumental in the formation and building of those large buildings by migrating to those countries. It may even be in your fortune to get such large buildings built here too.” Within only three years, Allah Almighty bestowed us with our dream school building.

At that time, the wives and children of our married colleagues had not yet returned from their summer vacation in Turkey. I started to stay with those colleagues during the summer. We stayed in the same house for about 1.5 months. There I experienced the stifling heat and saw the pedestal fans that whirled non-stop. We did not have an air conditioner. At nights, we used to turn on the pedestal fans and sleep in the balcony.

The next day, on Monday morning, I stepped into the classroom to give my first Turkish lesson. In other words, I started my classes at the school within less than 48 hours after my arrival in Lahore. I was the school’s first teacher whose major was Turkish. Previously, a Turkish colleague, who was an English teacher, used to teach Turkish to the students.