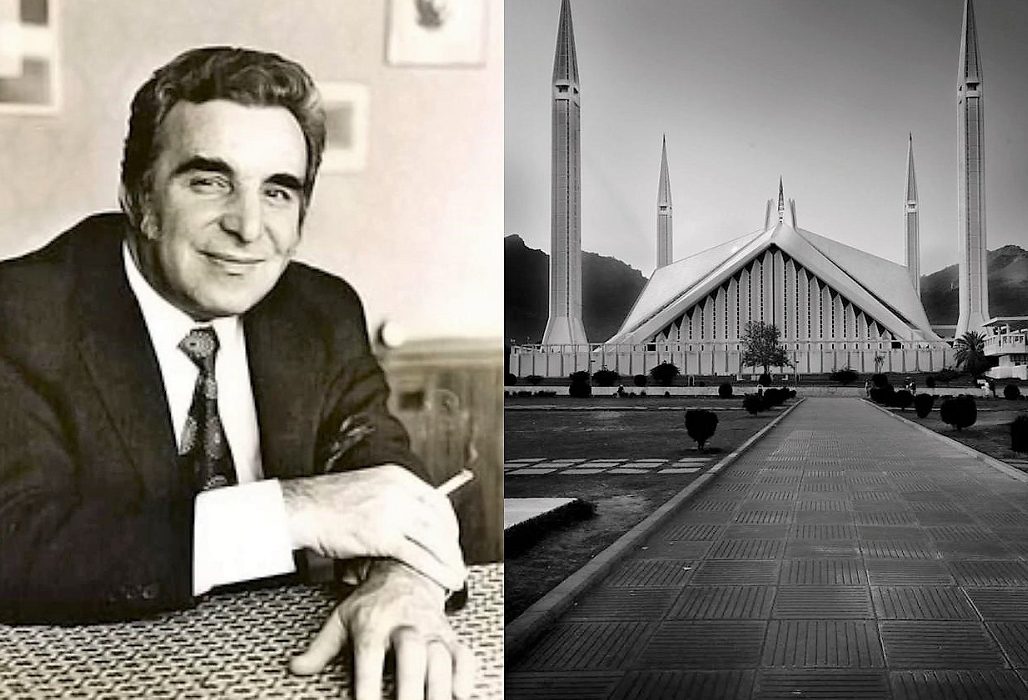 Researcher Doğan Yücel wrote about the Turkish architect Vedat Dalokay and his works in Pakistan. Yücel drew attention to Dalokay’s works in Turkey and around the world, and also mentioned his contributions to architecture in Pakistan.

During the visit of King Faisal of Saudi Arabia to the Pakistani capital Islamabad in 1966, it was decided to build a large national mosque. An international project competition was held in 1969. The winning design among 50 projects from 17 countries was the drawing of a famous Turkish architect: Vedat Dalokay. The design proposed by the Turkish architect Dalokay was awarded the prize announced by the Government of Pakistan. The national mosque’s geometric design was a combination of three beautiful ideas: An octagonal desert Bedouin tent, the cubic shape of the Kaaba and the minarets resembling Ottoman style on its four corners.

The mosque, whose construction began in 1976, was completed in 1986, with a donation of 120 million Saudi riyals from King Faisal. The mosque was completed at a cost of approximately $130-140 million at current values. The Faisal Mosque, which is different from the classical mosque architecture in Pakistan, was not only the largest mosque in Pakistan at that time, but also the largest mosque in the world from 1986 to 1993, with a capacity of 100,000 people.

It became the fourth largest mosque in the world

Later, the Hassan II Mosque in Casablanca, Morocco broke the record of the world’s largest mosque. Following the massive expansion of the Masjid al-Haram in Mecca and the Masjid an-Nabawi (The Prophet’s Mosque) in Medina, the Faisal Mosque receded to the fourth place in the world in terms of size. There is also an area around the Faisal Mosque where souvenirs are sold for the congregation and tourists who come to pray.

Dalokay, who lost his life in a car accident more than 30 years ago, will forever live in the hearts of the people of Pakistan in general and the people of Islamabad and Rawalpindi in particular. Thank you, sir! For your beautiful and glorious legacy that will survive for thousands of years.

Faisal Mosque used to be one of our stops every time we went to Islamabad. Its interior and annexes are large enough to visit in a considerable time. On the city side of the mosque, there is a sign on which the name of the architect and the structural engineer are written. The Turkish nationals who read this sign for the first time are a little surprised when they see the name Vedat Dalokay; then they realize that he is a Turkish architect and feel a special happiness.

Apart from the Faisal Mosque, Vedat Dalokay prepared three other projects in Pakistan. Of these, the Summit Minar in Lahore and the Aiwan-e-Sadr (Presidential Palace) Mosque in Islamabad were built. Other projects such as the Prime Ministry Complex and the National Monument were not materialized. In addition to Vedat Dalokay, some other Turkish architects materialized their works in Pakistan. However, the most magnificent and symbolic of these works is undoubtedly the Faisal Mosque on the skirts of the Margalla Hills in Islamabad.

He was one-term Mayor of Ankara who built beautiful works

Let’s get to know Vedat Dalokay, who is not forgotten by the people of Pakistan and is a source of pride for the people of Turkey. He was born in 1927 in Elazig. He completed his primary to high school education in that province. He graduated from the Istanbul Technical University Faculty of Architecture in 1949. After working as an architect at the Turkish Postal Service PTT and the Ministry of Public Works for a year, Dalokay went to Paris for further studies. Between 1951 and 1952, he completed his postgraduate degree at the Sorbonne Urban Planning Institute. After returning to Turkey, he established his own architectural studio in Ankara in 1954. Between 1964 and 1968, he served as the Branch Chairman of the Ankara Chamber of Architects and the General Secretary of the Chamber of Architects.

Vedat Dalokay, as the CHP (Republican People’s Party) candidate, was elected as the mayor of Ankara by getting the 62 percent of the votes in the 1973 municipal elections. He held this post until 1977, for one term. He was nicknamed “Dalokay the Intersectionist” because he put the Ankara traffic into order by commissioning the building of numerous intersections and roundabouts in the city. The Hittite Sun Monument and the Lausanne Square in Sihhiye district were built during Dalokay’s mayoral term. The Hittite Sun Monument not only became the definite symbol for Ankara, but also united the city with universal culture once again.

Dalokay had a colourful personality. One of his biggest contributions to Ankara were the city parks he built. The Altinpark, Abdi Ipekci, Kugulu and Segmenler parks were built during his mayoral term. He left his seat to Ali Dincer, who was elected as the candidate from the same party with 52 percent of the votes in 1977. Dalokay did not take any active role in politics and administration again.

An architect whose life is full of achievements

His design for Ankara Kocatepe Mosque could not be materialized. Even when the foundations of the mosque were laid, it was not implemented under the pressure of those who claimed that the mosque’s innovative design contradicted the traditional Turkish mosque image. Eventually, the design was amended and today’s Kocatepe Mosque, which has the characteristics of an Ottoman mosque, was built. Actually, it is stated that the Faisal Mosque in Islamabad is a chiselled design of Dalokay’s Kocatepe Mosque project, which was not allowed to be built in Ankara.

He also authored an award-winning novel

Dalokay was also proficient in literature. He won the Turkish Language Association Children’s Literature Award in 1980 with his children’s novel ‘Kolo’ and the ‘ALSC Mildred L. Batchelder Honor Award’ in 1995 with the English translation of this book. In this novel, Dalokay told the story of Sister Sheko and her goat Kolo, who lived in a village that was eventually inundated by the Keban Dam reservoir. Kolo was translated into Zazaki by the Tij Publishing House under the name ‘Biza Kole‘ (The Hornless Goat) in 2000.

Vedat Dalokay died with his wife Ayca Dalokay and son Baris Dalokay in an automobile crash near Kirikkale on March 21, 1991. He was buried in Cebeci Asri Cemetery.

Drawings and construction photos of the Faisal Mosque in the Yapı Magazine: