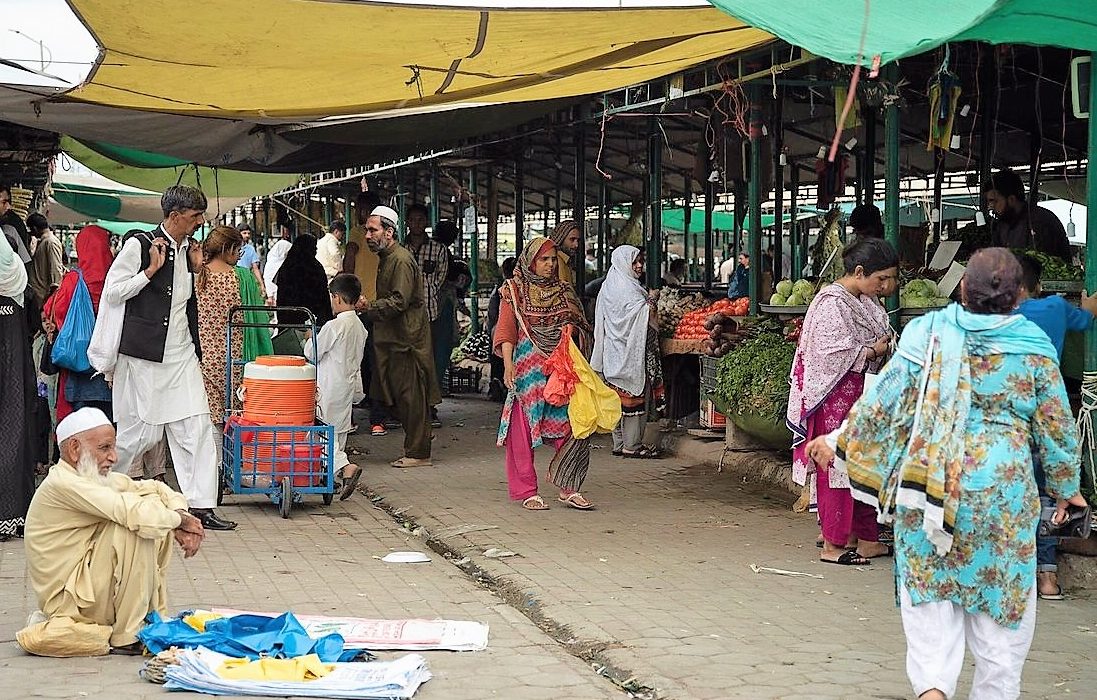 Author and writer Mehmet Karadayı wrote about the Itwar Bazaar, Islamabad’s renowned Sunday open-air market. Narrating the kaleidoscopic colours of the bazaar with the throngs of people visiting it every week, Karadayı also highlighted the skills of the porters and the shopping experiences his spouse had acquired in the Itwar Bazaar.

Despite our intentions to go there during the month of Ramazan, we were destined to visit the Itwar Bazaar after the Eid al-Fitr. It was March 2004 and the weather was getting hotter. On a Sunday, we took a taxi and went to the Itwar Bazaar. Since it was in Sector H-9, it did not take us long to reach there from the Sector G-10, where our residence was. I never imagined it would be this large an open-air market. It was teeming with crowds and activity. As we stepped in from one of the many gates, we came across the stalls of the second-hand clothing vendors. In consecutive stalls, you could find many apparels from different renowned brands at ridiculously low prices. Moreover, those dresses were either not worn at all or not used to the extent of excessive wear-and-tear. We purchased many colourful and cute dresses for our 5-year-old daughter. I also purchased two trousers even though they were for a smaller body size. I was to shed some weight and wear those pairs of trousers in my ‘victory parade’. Unfortunately, it was never meant to be then.

After the clothing vendors, we came across the carpet and household goods vendors. We passed along the customers who were keenly inspecting the carpets laid on the floor, being careful not to step on any of the wares. I took out the piece of paper on which I had written the measurements of the carpets we needed at our house and started looking for the carpets in suitable colours and patterns.

My search did not take much long. Shortly later, we bought a beige carpet from a vendor who was sitting rolled cross-legged on the carpets he had piled up to the belt level. The shopping ritual happened so fast that I found myself carrying the roll of carpet under my arm before I managed to say, “Keep the carpet here. I’ll come back and pick it from here after I finish shopping.” Suddenly a person appeared next to me and said he could carry the carpet. He was obviously someone who made money through hard work. I handed him the carpet. He deftly placed his straw tray on his head, wielded the carpet up in his other hand in one motion and placed it in the middle of the overhead tray.

Now that we had a helper with us, we started walking around the bazaar more comfortably. He kept on loading whatever we bought in the tray above his head in one swift motion. After a while, when I noticed that the weight on his head had increased, I stopped handing the wares to him. He insisted and even at times struggled to take the bags from my hand, but since my conscience did not allow, I calmed him down and continued carrying the rest of the bags; because shopping measures were unusual there.

Turned out, some vegetables and fruits were weighed per 5 kilos

When I gestured to a banana vendor with a victory sign to ask for ‘two’ kilos of bananas, he counted 24 bananas and packed them. Bananas were large, reminiscing the ones we called as ‘chichita’ in Turkey. The bag had taken its place on the overhead tray immediately before I could intervene as it was too much heavy. It turned out that bananas were sold by the dozen, not by the kilo. The same was true for mandarin oranges. In fact, I soon learnt by experience that was valid for almost all fruits.

The vegetables were differently-sized. I was stunned when the potato vendor, to whom I made the same victory sign to demand two kilos of potatoes, packed two five-kilo bags for me. It turned out that vegetables such as potatoes and onions were weighed by five kilograms as default. That was why the vendors had large weighing pans which they kept at their sides and quickly filled up to five kilos of vegetables. This was how large families shopped. Fortunately, I was able to intervene early and reduce the number of bags to one.

When we entered a lane of stalls, my wife’s face beamed with a wide smile. Colourful fabrics were on display in dozens of shops facing one another. “Oh my! We will not be able to get out of here until the evening!” I screamed, but internally of course. From then on, I was dependent on my wife. We visited one shop after another. Rolls of fabric were brought down from the shelves and some more were rolled and placed back. Every detail was scrutinized. Later, the fabrics piled up on the counter were left behind to visit another shop with the same appetite. The same ceremony was repeated there like a ritual, one that can never be violated. Every time we left the shop without shopping, I looked into the eyes of the vendors and apologized silently, but the vendors sent us off smilingly.

Finally, there were no more shops left to visit on the lane. “Okay,” I said to myself, “we’ll be leaving before the evening, thank goodness!” What happened? We walked back and entered the stalls which my wife had perceptually marked while scanning the fabrics. Cut this much from this fabric and that much from that one… Scissors worked, fabrics were cut, packages were made, money was paid. Vendors were satisfied and we left as satisfied. It was then that I realized that the vendors knew who the buyers were. They also knew who liked which fabric and when they would return for that. That was the reason why they were beaming with smiles while we left their stalls. What I could not understand was how my wife managed to remember where a specific fabric was there among so many colours and patterns in so many shops.

The person we got angry turned out to be our friend

While we were skipping from one counter to this counter, someone passed in front of us; he was carrying a straw tray on his head. Our porter pointed to that man and made a move to take the bags from my hand to load them on his overhead tray, but I refused again. On the other porter’s tray were two five-pound oil cans, half a sack of rice, a sachet of vegetables and fruits. I hurt. My wife had also witnessed that and she was mumbling in protest. “How can they be so unprincipled? Don’t they have any mercy? They should fear Allah!” If I let go, she would go and pick a fight with the person who had hired that porter.

We did not wait long; a well-dressed man approached the porter. We quickly paced our steps and caught up with them. Our porter was with us. I saw that the person shopping was a friend of ours. I asked him with a grimace, “Abdurrahman, what is this? Don’t you pity the porter?” “He does not listen to me, brother. When I do not hand him the bags, he unloads the rest and tries to leave. He says he wants the right of his labour, not charity. I am helpless. Otherwise, I am not comfortable at all with what he does,” Abdurrahman said. I looked at the face of the porter. He stood erect and dignified. This was the dignity of halal money he earned. “Then,” I said to Abdurrahman, “hire another porter. He will not object to one more porter making money.” He must have liked the idea that he immediately hailed another porter who was walking nearby.

While the two porters shared the load, we continued shopping. Our porter, who witnessed the episode, did not insist on taking the bags from me again. He helped us in loading the contents of his tray and the bags in our hands into the trunk of the taxi. I tipped him handsomely and I also shook his hand and thanked him. He gave me a pearly-white smile on his sun-stained face that beamed bright with that smile.

The Itwar Bazaar was virtually a parade of humankind. The rich, the poor, the young, the old, the veiled, and the unveiled shopped together on an open ground, melting all the differences in a pot and appearing as human beings. Despite the pain I felt in my calves in the evening, the happiness of being one of them was priceless.