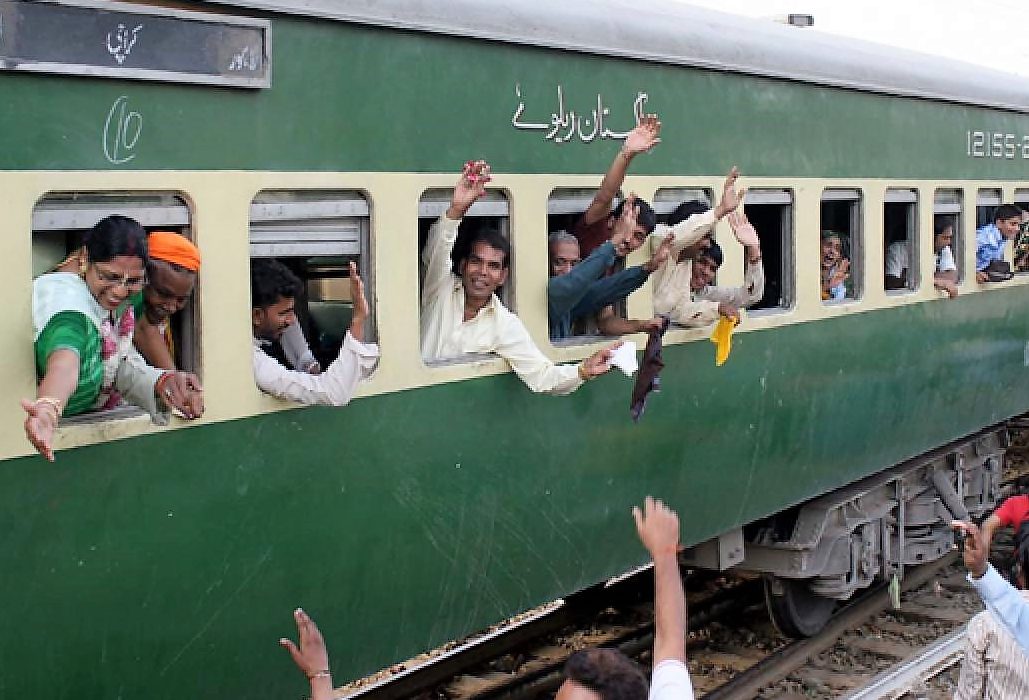 Doğan Yücel, a former PakTurk teacher, wrote about the long but inexpensive train journeys in Pakistan. Yücel, who quoted examples from his adventurous travel experiences, also reminded the heartfelt display of humanity after a train crash near Karachi.

The most inexpensive way of intercity travel in Pakistan, although it lasts longer, is to travel by train. I would like to briefly express some of my and my colleagues’ memories here. In the early days, we used the train a lot for reasons such as low salaries and taking students to trips and competitions.

Train journeys, especially with crowded economy class during the scorching heat of the summer months, do not let themselves forgotten even after so many years. 😊 Intercity trips used to take quite a long time. I rode on 36-hour train journeys twice. In one, it was summer and it was so hot that I could not even see my face because of the dust. The other time was in the winter season. Eight hours before Quetta, the train stopped. I asked the staff and they said, “The engine broke down, we have to wait eight hours for the new engine to arrive from Quetta.”

The Jafar Express plied between Quetta and Islamabad. We usually travelled in a six-person compartment in the ‘Lower AC’ section. The staff would hand us the woollen blankets called ‘Pattoo’ in addition to the ticket price. The food on the Jafar Express was very delicious or it seemed to us that way because we used to be very hungry during those journeys. 😄

The engine driver was probably a public van driver once!

We once travelled from Quetta to Khairpur Mirs in the economy class. That train was nice too. We would go to the AC (air-conditioned) car of the economy class and if we could ever find an empty seat in the aisle, we would there for some time. Shopping from the window of our compartment during stopovers was an altogether thrill. Once the train stopped in Sibi. There was a makeshift mosque there for the faithful to offer their prayers. We got off the train and while we took our ablutions and then stood up in prayer, the train started to move. Trains move slowly at first so that everyone can catch up. We just finished the prayer and jumped on board right on time.

Another time, we travelled to Khairpur Mirs from Peshawar with Mr. Sadullah. The train used to slow down near Khairpur Mirs, but it would not come to a complete stop. It was only slowing down enough for the passengers to get off or get on. It was kind of like a Pakistani public van. In Pakistani public vans, the conductors would grab you from the jam-packed passenger chunk and projectile you off board or pull you inside the van to shoehorn you into the crowd very skilfully! I guess the driver of this train would have been a public van driver in the past, so he would not have stopped the train. When we travelled on that train with Mr. Sadullah, we jumped off the train in Rohri, a town Khairpur Mirs. We took economy class seats and travelled by train from Rawalpindi to Quetta to attend Mr. Yakup’s wedding.

My travel companion on a train journey was a goat!

In the ‘Economy’, ‘AC Parlour’ or ‘Lower AC’ carriages of the trains, you will have the unique opportunity to experience the thrill which you otherwise cannot experience elsewhere in daily life. The real adventure is in the economy class. People and animals travel in peaceful coexistence there! For example, during one of my travels, my travel companion was a goat. It even offered me fresh milk directly from the source.😄 The owner was travelling with his entire goat herd in the economy class. I can say that I learned the love of animals in the economy class of trains. Those journeys, which seemed difficult at that time due to the heat, the crowd, and the smell of spices, left such beautiful memories on the palate that even after a decade or two, they both sadden me with longing and also make me smile, leading to sigh and say ‘how sweet days those were!’ In those days, we had only one thought: to serve the people of Pakistan. Things like low salaries or traveling with goats could never crush us as challenges.

When our school building in Lahore was in Gulberg district, our home was in the Cavalry Ground. On our way to school, there was a bridge built over the railway tracks, but it was of no use to us then. We had to cross the tracks as it was not possible for us to climb the bridge on our bicycles. What’s more, the rickshaw drivers preferred to avoid the bridge. Whenever the train was due, the meshed gates on both sides of the tracks would be shuttered. Whenever the gates opened after two or three minutes, traffic would start flowing again in mutual uproar. It was incredible how so many people in their vehicles could gather there within such a short time.

On this occasion, I pray to Almighty Allah for His mercy to those who lost their lives in the recent fatal train crash (*) in Sindh province. I also wish a speedy recovery for the injured and patience to the families and relatives of the dear departed.

A humanity pageant in Sukkur

I would like to relate here an incident which had happened three years back, on June 30, 2018, through the news report filed by Imran Kazmi of the daily Express Tribune (**)

Shalimar Express had met the mishap on a journey from Karachi to Lahore.

In an utmost display of selflessness and devotion to provide relief, villagers in Sukkur reached out to the passengers of a train after it derailed following an accident.

The Shalimar Express on a journey from Karachi to Lahore survived an accident a few kilometres away from Mehrabpur in the nick of time. The bogey of the economy class almost detached from the train on its way on a fast speed but the driver promptly applied the brakes.

Talking to The Express Tribune, DTO railways Sukkur Usman Gujjar confirmed that the Lahore-bound Shalimar Express faced technical difficulties at Mehrabpur on Thursday. Usman said the stoppage was for almost two hours. The train resumed its journey after the railways team fixed the damaged parts.

As an eyewitness narrated, the train was stranded in the middle of nowhere in scorching heat with no sign of population or life. The passengers were extremely perturbed as their children were crying and women were suffering intensely.

To make matters worse, the train staff informed the passengers it might take up to six hours for the rescue operation to begin.

Amidst the feeling of intense helplessness, the residents of Noo Potra village were seen descending alongside trees in large numbers. Some were carrying water coolers, while others had milk and other edible items with them. Those who couldn’t carry these brought ice with them for the affectees. Every one of them wanted to serve the passengers.

Meanwhile, some of the residents brought a large cauldron of rice in a rickshaw. The poverty-stricken people apparently did not have dishes so they brought sand plates to serve the food. They started distributing food items as soon as they arrived on the scene.

According to the eyewitness, the role of the youngsters was exemplary as they engaged in rescue work despite the weather conditions.

Neither did the helpers know who they were helping nor were they aware to which province, tribe or religion the affectees belonged or the language they spoke. There was only one relation between them; of humanity, sympathy and patriotism.

The eyewitness further said he thanked the angelic workers in person and blessed them from the core of his heart. These compassionate beings seemed ecstatic on gaining a chance at mass service.

Finally, when the train was restored, the helpful villagers bade farewell to the departing train in a way usually employed to see-off close relatives.

The eyewitness said the fleeting love taught many lessons to the onlookers on how beautiful the people of Pakistan are. “They’re sympathetic, helpful, humane and feed others from what they have,” he concluded.