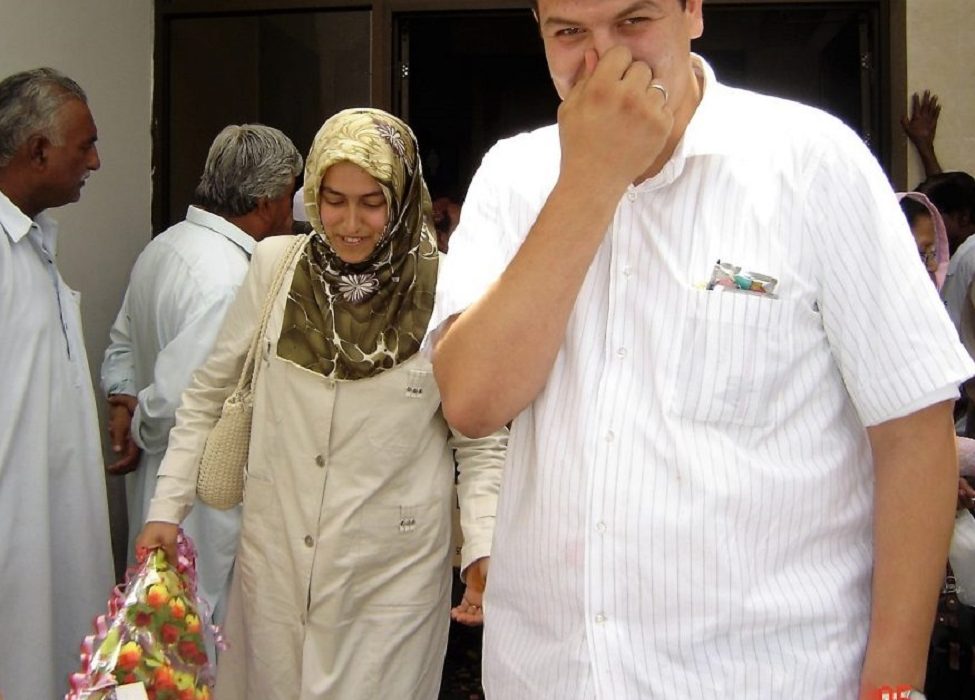 The arrival of Taner Koçyiğit and his wife, Mrs Zübeyde in Quetta after their wedding in Turkey (2005).

Educationist Taner Koçyiğit wrote about going to Turkey to get married while working in Quetta and what he thought to explain the conditions of Quetta to his future wife. Koçyiğit also told how that one year they spent in Quetta turned into one of their best years in Pakistan.

We were used to living as singles in Quetta by then. We had learned how to cope with the challenges of everyday work. We were spending peaceful and enjoyable days with friends as if we were living in one of the most comfortable cities in the world. In the summer of 2005, I went to Turkey to get married. Even though I had been engaged for about a year, I couldn’t come up with a good idea on how to explain Quetta’s conditions to my future wife.

How would I explain that the electricity was cut off for hours every day, that the gas we used for heating and cooking could be cut off at any time, and that the gas restored after the cut during the night posed serious danger of poisoning and even killing the people in rooms? How was I going to say that the water was available for a few hours a day, that we could not go out for daily chores whenever we wished due to safety issues, that people perished in explosions that occurred in different parts of the city almost every day, and there was hardly a week passed without an explosion? How would I explain to a lady from Turkey that lizards could appear from anywhere in the house when she least expected it, and that they had the potential to poison even a battalion if they fell into a pot in the kitchen? I was clueless.

When I saw Pakistanis at my wedding, I was happy as if my fellow nationals had come

I was hoping my future wife would get used to all these negativities once she came to Quetta. I was hesitant to tell the details so as not to frighten her too much. In July 2005, with such thoughts racing in my mind, I went to Turkey to get married. A group of 30 people, consisting of parents and students in Quetta, came to our wedding in Bursa. The moment Pakistani guests entered the garden rented for the wedding, I was touched and delighted as if I had been among foreigners until the arrival of my fellow nationals.

We returned to Pakistan nine days after the wedding. Our first stop was Karachi. When my wife saw Karachi’s 20 million crowd and extreme heat, I wished to give her some solace. Saying, “Quetta is not like this. There is no traffic jam and the weather is very good. There is no humidity, and there are apple orchards in some places around. You will be very comfortable there!” I talked about the beautiful features of Quetta. When she saw what kind of a place Quetta was from the windows of the plane, she shrieked in astonishment, and what a shriek it was! Even the passengers around us heard that. It was because most the houses, especially where the airport is located, were made of adobe, and on the way down to the city, only adobe houses could be seen in that place among the bare mountains.

We never forget the hospitality of the parents

We were grateful to the friends who greeted us outside the airport terminal. They had also arranged a very exquisite program for us. As I guessed and prayed, my wife got used to Quetta in a short time. A year we spent in that arid but friendly city would constitute one of our best years in Pakistan… During that year, we made very good friends from Pashtun, Hazara, Baloch, Turkmen and other local communities. We could host many local guests at our house and even read Risale-i Nur Collection in Urdu every week with a circle of local friends. We can never forget the hospitality of our friends and school parents in Quetta. They were so generous in heart and kind. For example, when a family with limited means invited you to dinner and once you saw the abundant table they had set, you would think, “It’s as if the breadwinner of the house had spent all of his or her monthly salary for this feast”.

During my tenure in Quetta, we could visit many cities of the Balochistan province. That geography is similar to the south-eastern region of Turkey. For example, the Baloch language is very similar to the Kurmanji Kurdish. This region, like the south-eastern provinces of Turkey, has lagged behind as it received little investment from the state. There was almost no industry, and since there is little arable land, people’s financial situation was not good, but they had generous hearts.

Truck-hauled car and a costly experience!

With the summer holiday of 2006, my place of duty also changed. We were to travel from the westernmost to the easternmost part of the country to settle in Lahore, the cultural capital and second largest city of Pakistan, but how? It had been a year since we bought our household stuff, and our car was a minor 1993 model Suzuki. It wouldn’t be worth it if we sold the car. We didn’t have the money to buy new items if we left our things behind. We rented a truck with the recommendation of a friend. We loaded our car and all our belongings on that truck and saw it off to Lahore. We took a flight to Lahore.

Our truck arrived in a few days. However, our belongings had both been soaked in the rain and plundered by the police or someone else who stopped the truck for checks. Three sides of the car had slammed against the truck bed and had been severely damaged. This was another, but rather costly, experience life had taught us.

Part Fifteen: Nowhere else have I experienced those Eids al-Adha