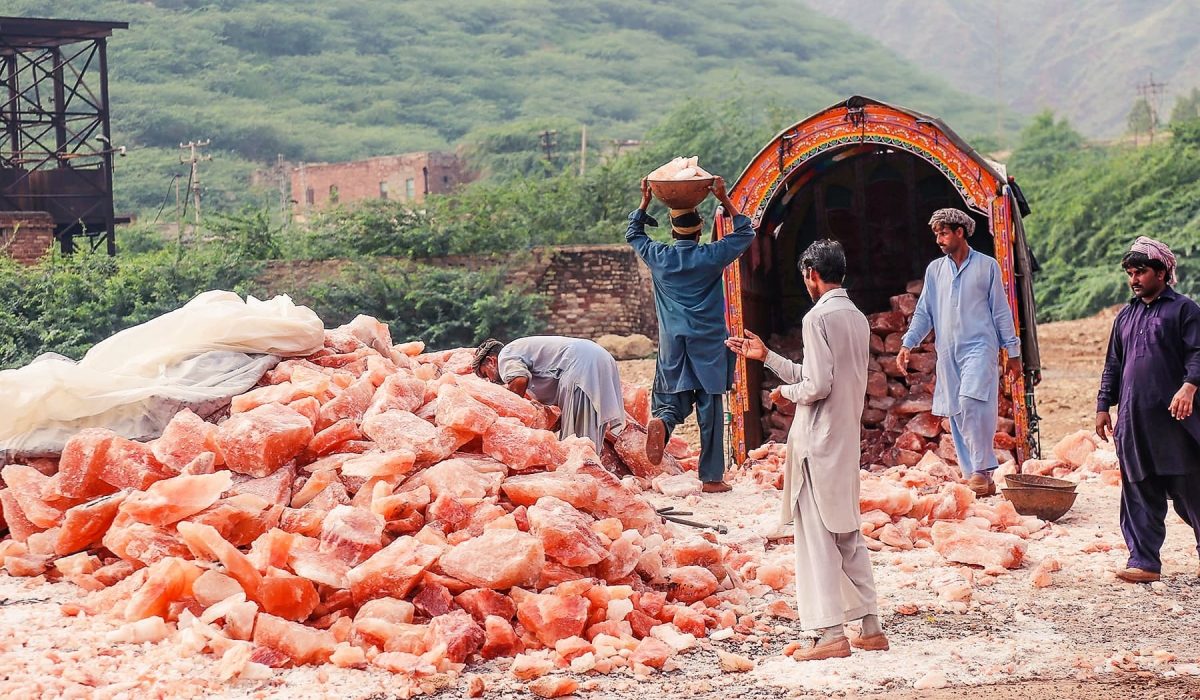 Researcher Doğan Yücel wrote about the Khewra Salt Mines, the source of the Himalayan salt, mined in Pakistan and sold worldwide for both health and artistic purposes. Yücel chronicled the history of the mine, where the salt was used and what it has meant to Pakistan.

Khewra Salt Mine was once called the Mayo Salt Mine in honour of Lord Mayo who had visited the place as the Viceroy of India. The mine is in Khewra, north of Pind Dadan Khan, a county of Jhelum province in the Punjab province, Pakistan. It is on the Potohar Plateau, which stretches from the Indo-Gangetic Plain, rises to 288 meters above sea level and is considered the second largest salt mountains in the world. Spanning 200 km from the Jhelum river to the confluence of the Indus river in the south of the plateau, the Khewra Salt Mine is part of the Khewra Salt Range, a mineral-rich mountain system.

The Khewra Salt Mines at the foot of the salt mountain range are the oldest in the subcontinent’s salt mining history. Salt forms in an irregular dome-like structure. The mine has seven thick salt strains with a total thickness of about 150 meters.

British engineers developed the mine

The mine is famous for the production of pink rock salt, commonly known as the Himalayan salt. According to narrations, the mine’s history dates to its discovery by Alexander the Great’s troops in 320 BC. However, the mine was discovered not by Alexander or his allies, but by the horses in his army found licking the rocks! Some say that the sick horses in this army were healed after licking the rock salt. However, using salt in trade became prominent during the reign of the Mughals and Akbar Shah. Salt was traded in various markets as far as the Central Asia.

After the collapse of the Mughal Empire, the mine was operated by the Sikhs. The Sikh Commander-in-Chief Hari Singh Nalwa shared the management of the salt mine with Gulab Singh, the Raja of Jammu. The former controlled the Warcha Salt Mine, while the latter supervised Khewra. During the Sikh rule, salt extracted from the mine was used both at tables and as a source of income.

In 1872, after conquering the territories once controlled by the Sikhs, the British developed the mine further. The main tunnel at ground level was designed by mining engineer, Dr. H. Warth. In this way, mining conducted by miners under hard and dangerous conditions in irregular and narrow tunnels was modernized.

The mine’s water supply was scarce and no storage facilities existed for the extracted salt. The only road to the mine was on rough and rocky terrain. To solve these problems, roads and warehouses were built by the government, water supply was provided, entrances and tunnels were improved, and a more modern system for salt extraction was installed. Penalties were introduced to control the smuggling of salt from the mine.

The mine consists of nineteen floors, eleven of which are underground. The total length of the tunnels is about 40 km. The temperature inside the mine remains around 18-20 °C throughout the year. The 2 ft (610 mm) narrow-gauge railway system laid during the British era is still used to haul salt from the mine by railcar.

The Khewra salt is Pakistan’s best known rock salt. It is a raw material in many industries, including in the soda ash plant established by AkzoNobel in 1940. The salt obtained from the Khewra Mine is also used to make decorative items such as lamps, vases, ashtrays and sculptures, which are exported to the United States, India and many European countries. This artistic use was pioneered during the Mughal period, when many artisans made tableware and ornaments from salt. Dr. H. Warth set up a lathe to cut works of art from rock salt because he found the physical properties to be similar to gypsum.

The Pakistani government decided to privatize 17 state enterprises, including the Khewra Salt Mines, in 2008, but the plan was later shelved. The mine is operated by the state-owned Pakistan Mineral Development Corporation.

In 2010, during torrential rains all over Pakistan, water from a nearby stream breached the mine and inundated it up to a depth of 60 cm, closing the outlets. Closed for some time, the mine was later reopened.

The Khewra Salt Mine is a major tourist attraction with around 350,000 visitors annually and generates substantial income. Visitors are taken to the mine by rail. There are many salt water pools inside the mine where also a scaled down model of the Badshahi Masjid was built about fifty years ago with multicoloured salt bricks. Other artistic carvings at the mine include the Minar-e-Pakistan, the statue of Allama Iqbal, the town of Murree, a model of the Great Wall of China and a model of the Mall Road. A 20-bed clinic was opened in 2007 to treat asthma and other respiratory diseases with rock salt.

Today, thousands of people visit the Khewra Salt Mines for treatment. There are treatment centres built with salt stone bricks in the tunnels, of which ceilings and walls paved in tones of pink rock salt. Thousands of people visit these small clinics in the mine every year to treat asthma, bronchitis, ear infections, shortness of breath and allergies. The treatment processes, which are drug-free, are supervised by both the natural resources and health ministries.

In February 2011, Pakistan Railways started operating special trains for tourists from Lahore and Rawalpindi to Khewra. For this purpose, Khewra Train Station was renovated helped by a private firm. Other touristic places in the mine include the Pul-Saraat (a 75-metre-high [245-feet] meeting room), a pillarless salt bridge over a 25-metre-deep saltwater pool, the Sheesh Mahal built of pale pink salt crystals, and a café.

The mine can be visited both on foot and by open railway carriages made for the transport of the rock salt. Inside the mine, there are beautiful red and white salt streaks. Outside, there are clinics built with stones excavated from the mine. Souvenirs, trinkets and space lighting equipment are sold in the mine’s gift shops. Large salt rocks mined become edible salt or ornaments in workshops in Khewra city or elsewhere. Pakistan generates millions of dollars in income from the products coming out of these mines and the export of pink salt.