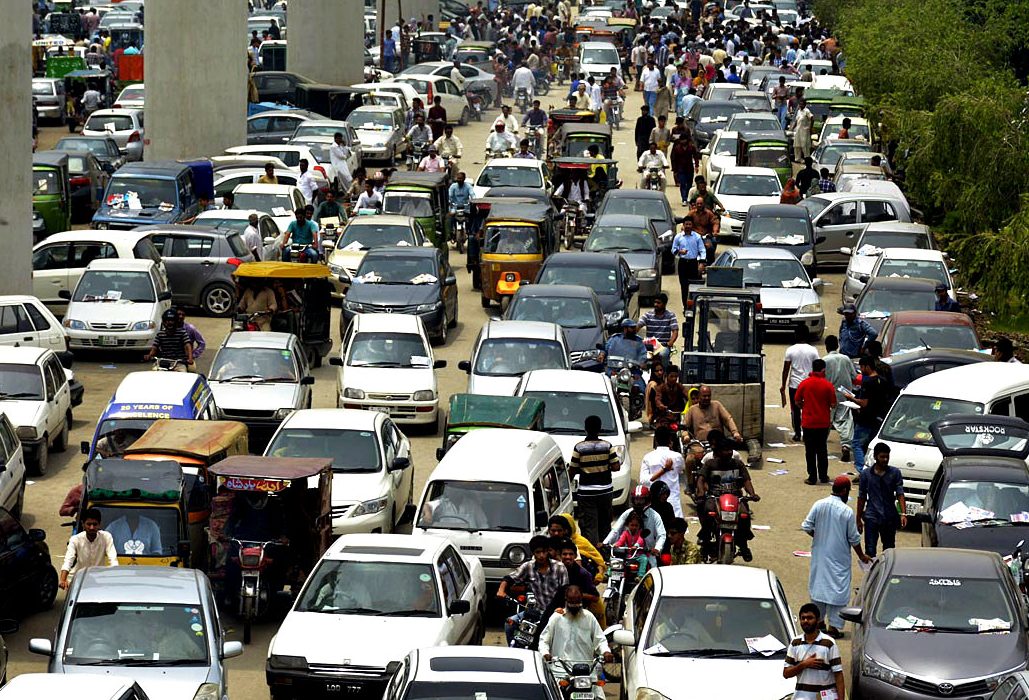 Researcher Doğan Yücel wrote about the order and rules of the traffic in Pakistan, which appears like a “chaotic mess” from the outside. The points told by Yücel, who also conveyed his years of experience, also provides a “guide” for safe and fast travel for novices in the country.

Since the entry of rickshaws (three-wheeled motorcycle taxis) to Islamabad was prohibited, only commercial taxis would ply the city’s roads. Later, and only for the fringes of Islamabad bordering Rawalpindi, rickshaws running on natural gas (CNG) were allowed to operate. In Karachi, you almost would not come across any rickshaw in some neighbourhoods. However, if the buses and minibuses in other cities of Pakistan are considered, hiring a rickshaw is almost the only alternative for those who wish to travel fast from one place to another. There are also shared rickshaws named ‘tuk-tuk’ that carry passengers on set routes across the city. Recently, the metrobus lines inspired from Istanbul have also started to carry passengers in Islamabad, Lahore and Peshawar.

In buses, the front seats are reserved for women and the back seats are for men. There have been a lot of cases when people, including myself, sit in the empty seats reserved for women in the front without knowing this norm. However, not longer than ten seconds, either by a woman’s warning gaze or the warning of the bus conductor, you are ushered to the back of the bus and learn the norm right there and then. If you chose to travel on top of the buses, you are charged lesser than as compared to travelling in the seated fuselage. The bus conductors keep in their minds who among the hundreds of passengers have paid the fare or not. After each stop, they first charge the new passengers in the seated compartment, later climb on the roof and charge the new passengers there too. All these movements happen while the bus moves in the busy traffic. The roof is accessed from the stairs at the back of the bus.

Two alternatives other than plane for intercity travel are buses and trains. Trains are divided into classes and subclasses are usually overcrowded. Travelling by bus can be summarized as ‘travelling by Daewoo’ and ‘travelling by other operators’. Daewoo Express is renowned for its punctuality. Once I was three minutes late to the bus. Some friends stood in front of the bus and stalled the departure until I arrived.

The old type and previously common blue rickshaws used to emit thick engine smoke because they ran on petrol mixed with motor oil. Since they were powered by motorcycle engines, those rickshaws were kickstarted by wrapping a rope around starter roll and yanking it fast almost the same as operating an irrigation pump. At times, the drivers had to push them to start the engine with a sputter. The most important thing when getting on a rickshaw is to describe your destination extremely well. Often rickshaw drivers complain that you have taken them farther than the described location and ask for a fare higher than you agreed at the beginning. Occasionally, some rickshaw drivers do not ever bargain and accept whatever fare you hand to them. Once I set out from Gulberg to catch my classes at our school in Islampura. I stopped a rickshaw and told the driver that I wanted to a location formerly known as the Nehru Park. Probably due to my pronunciation then, the rickshaw driver took me to the edge of the River Ravi outside of the city after a two-hour drive. I did not know the roads well at that time. “This is not the place I’ve meant!” I protested. He said to me, “Bhai Jaan! (Dear Brother!) Here’s the river!” It turned out that the driver had misheard the word ‘Nehru’ as ‘neher’ (river). I phoned at the Pakistani deputy principal of our school and told him that I was late for the school as the rickshaw driver had taken me to the River Ravi instead of the Nehru Park. I requested him to describe to the driver how he would be able to drive me to the school. I finally got to the school, but I had covered the one-and-a-half hour drive in about three hours. I had also missed my first two classes.

Most of the rickshaw drivers in Lahore are Pashtuns who are known as Pathans or addressed as ‘Khan Sahib’ in Pakistan. While seeking to hire a rickshaw for going from Gulberg to Islampura, a driver asked me “Are you a Pathan?”. He must have asked so due to my complexion. I answered, “Yes,” thinking the driver would charge me reasonably. He asked me how I had been  and about my health, and I answered him in Pashto. From then on, whatever he spoke in Pashto to me, I replied him by saying, “Ao!” (Yes!) That went on for about half an hour. Later, he asked me something and when he could not receive any  know what he said or what he meant. The only thing I knew was that the man had been furious .

What to do while approaching potholes and bumps?

The driver sits in front of the rickshaw and there is a passenger compartment covered with a plastic tarpaulin to accommodate two or three people. Since some parts of the passenger compartment are decorated with tin linings, you need to be extremely careful while getting on and off the rickshaw or else, your shirt or trousers may get entangled and torn by the sharp edges. Never ask me how many trousers and shirts I and my colleagues sacrificed in rickshaws! Most of the time, if you are not travelling with the family, the plastic doors are locked out and you hit the road with open doors for ventilation. Due to the scissor shock absorbers and the small wheels, it is necessary to get up from your seat in every bump or pothole, otherwise the rickshaw will bounce the customers in a rickety way, for sure! The old blue rickshaws lack indicators. When the rickshaw driver is about to take a turn, he takes out his hand and so indicates the turning direction.

Another essential service provided by the rickshaws is towing (or should I say, pushing) the broken-down cars. If your car breaks down somewhere, you stop a rickshaw. The driver leans the sole of his foot on the right side of the trunk and drives the rickshaw to push the car until the first fuel station or the mechanic. In case the driver in the car needs to slow down or change direction, he lights the indicator or else any sudden move may hurt the rickshaw driver’s foot terribly. In many cases, we utilized the rickshaw services to have our cars pushed to the service stations.

Both in Karachi and Lahore, no one including the shop owners go to the old downtown, where the industries and deep-seated trade are located, by their personal vehicles. Those who would like to go without compromising from their comfort do so by their chauffeur-driven cars or their personal vehicles which they would not weep over if they are ever scratched or hit by other means of transport. The cars which ply the busy roads of big cities in Pakistan for a year surely get their ample shares from scratches and dents. Owners do not have the scratches or the dents repainted, because the repainted cars are considered as ‘accidented’ and are sold at lesser amounts than the rest. You must not be surprised if some motorcycles scratch the sides of your car while you are waiting at a traffic light. You may sometimes see families of seven or eight riding as shoehorned on a motorcycle. In such busy cities, motorcycles are the most exquisite way of transportation and hauling loads. People carry almost anything with the motorcycles!

Especially in crowded cities like Lahore, Faisalabad, and Rawalpindi, budget hauling services are usually conducted on ox carts or donkey carts. While I was in Lahore, I heard that approximately 5000 donkey carts worked in the hauling business. For example, the lunches that were cooked in the dorm kitchen would be hauled to the school on a donkey cart. People haul bricks, construction iron, and sand with such carts by hanging flags or shiny tassels in the front and the back. Since these carts are prohibited from riding on the main roads in the daytime, they mostly work after the dusk. This is why, it is highly essential to stay alert against the ox carts and the donkey carts which may approach your car from the opposite direction!

Tractors are used very actively in hauling business as well. Since most of the cities do not have steep hills, tractors are loaded with heavy cargoes. On the roads, you may observe tractors with broken axles or travelling on their back wheels while the front ones are up due to the heavy load. While driving on the intercity highways, you may also see trucks hauling hay and pulp to the paper factories. They are so overloaded that their silhouettes make you mistake them as ‘giants’! The hay bulging from all directions seems it will scatter at any time.

Horns blare in the traffic, but the drivers in the cars before yours look back only when you sound the horn five or six times consecutively. Yet another detail is that drivers follow the traffic lights on the junctions more than the gestures of the traffic police crewing there. If a busy avenue is blocked due to an accident – and if there are no traffic police around – mostly drivers find their way even if it takes to drive in the opposite direction.

How long does it take to decorate a bus?

In Lahore traffic, it is almost impossible to gesture and so request the right of way by flashing the headlights. Once the horn on my car went out of order. I stopped at the traffic lights on the Ferozepur Road and was to take a right turn from the service road. A motorcyclist stopped in front of my car. I flashed the headlights on him a couple of times, but he seemed not to understand what I had meant. Eventually, I gently pushed him with the bumper for two or three metres. First, he could not comprehend what was happening to him. He looked around and noticed me. At last, he pulled aside and I managed to move on.

During their first years, many friends and colleagues who had no financial means for purchasing cars would ride on their bicycles to the school and home despite extremely hot weather. The teacher couples would ride on the same cycle to the school. Especially in the mornings, the railway underpass in Gulberg would teem with cyclists. When the train would pass and the road would reopen, hundreds of cyclists would move all at the same time to reach across the railway line.

Yet another interesting point about the traffic in Pakistan is the decoration of the buses, tractors, trucks, and even the Pakistan International Airlines aircraft in traditional bright and ceremonial colours. Those who purchase new trucks or buses visit a decorator’s shop where the vehicles are decorated extensively for an entire week before hitting the road. The decorations include slogans, tassels with chains, and kaleidoscopes of paintings. Everywhere in the tractor and truck trailers are decorated colourfully.