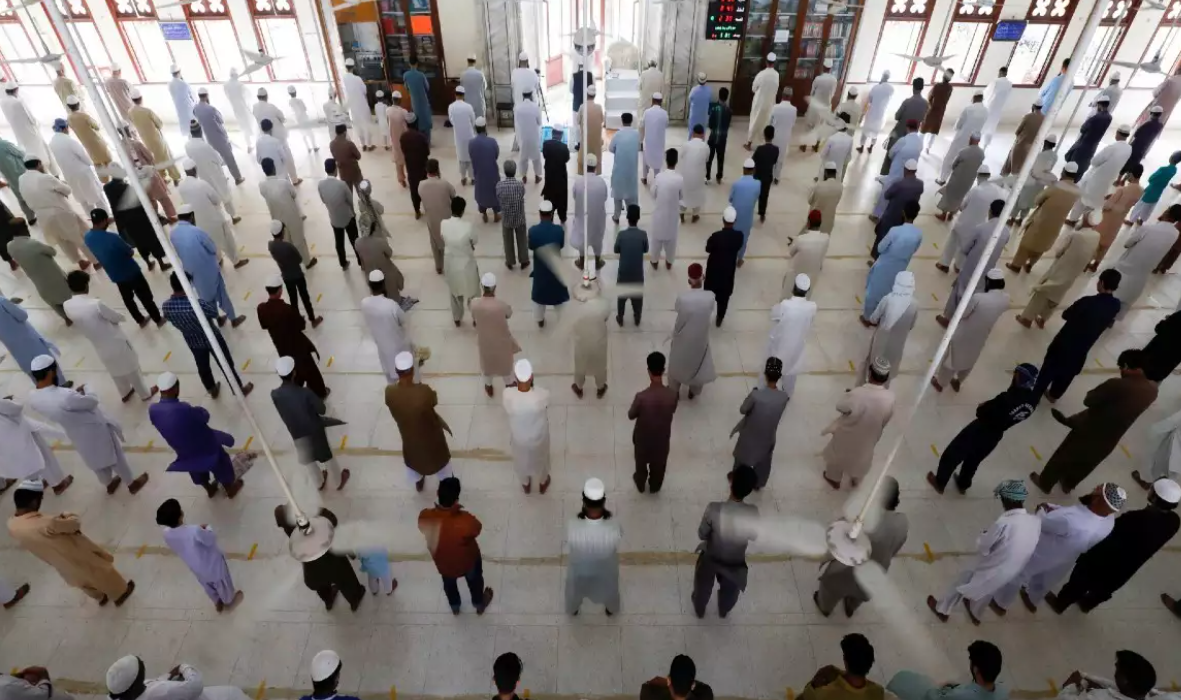 Sadullah Bayazit, an educationist who lived in Pakistan for almost a quarter of a century, wrote about the months of Ramadan he had experienced there. Stating that the country would practically be permeated in a festive mood with the advent of the three holy months, Bayazit said, “Each Ramadan in Pakistan is distinctively unique!”

The exquisite spiritual atmosphere that breezes with the advent of “the three holy months” in Pakistan permeates the entire country. You can feel everywhere that you are one step closer to Ramadan when it is Laylat al-Raghaib (Night of Wishes) that marks the start of the three holy months. From the way people start fasting during these three months, giving alms more frequently, calculating in detail about their zakat and determining to whom it will be given, and the care and purchase of clothes for all family members, you can observe that festive atmosphere prevailing throughout the holy month of Ramadan.

One cannot comprehend how quick the month of Ramadan begins and ends thanks to the intense activities and spiritual atmosphere in every corner of the country. Many times, we would say to ourselves, “How quickly it has passed!” I had the opportunity to perform the first tarawih prayer with the entire recitation of the Holy Qur’an for the first time in my life in Pakistan. In almost all mosques of the country, tarawih prayers are performed with khatm-e-Qur’an. In some mosques, the Holy Qur’an is entirely recited two times during the tarawih prayers. We even witnessed in some mosques the Holy Qur’an being recited three times in its entirety during the tarawih prayers in the month of Ramadan. I first went to Peshawar in 1998. The month of Ramadan in that year had overlapped with the winter. A friend of mine at the university invited me to an iftar when we first met. His father was a doctor. It was an iftar much different than I had known until then. They were very friendly and kind people.

Should we come to ‘iftar’ or ‘dinner’?

The fast-breaking meal which we know as iftar in Turkey is named as iftari in Pakistan. It would be better to explain about the ‘iftari’ in two parts. As far as the understanding of ‘iftar’ in Turkey is concerned, it is the dinner during which the day’s fast is broken. However, the Muslims of the Subcontinent first break their fast with the ‘iftari’ with the concern for not delaying the maghrib prayer. Iftari comprises aperitifs generally including dates, water, Jam-e-Shireen (a sort of rosewater sherbet), pakora (a sort of deep-fried hash browns), pastries and fruits. After breaking the fast with these, the maghrib prayer is offered. The main course for dinner is eaten after the prayer only.

My colleagues who had taught in Pakistan had many memories in this regard. The invitees ask you for clarification: “Is it only ‘iftari’ or is there dinner as well?” There were friends who would attend the iftari somewhere and the dinner somewhere else. Iftaris and dinners are no short of the expression that goes, “one thousand and one dishes”. People are extremely hospitable. Whenever we proposed to anyone of our Pakistani friends “Should we come for an iftari at your home?” or “Would you please come for an iftari at our home?”, we would immediately set the date. There were many cases when we hosted and were hosted during this beautiful and holy month.

Every passer-by is an invitee to the iftari floor table

During a month of Ramadan in Lahore, we had visited Mr. Iqbal – businessman who was also one of the benefactors of our schools there – at his fuel station. When we went there, we saw a large group of people who had gathered in the grounds next to the fuel station. When we asked him why so many people had gathered there, he replied, “We daily offer iftari here. Every passer-by may come, sit and break their fast.” He was offering iftari to everyone with profound sincerity. We admired that and said, “What a beautiful practice it is!” He offered us iftari just the same and the food was very delicious. During this holy month, in all places where Muslims live, tents are erected, iftaris are offered, and food hampers are distributed to the needy. However, the scene we had witnessed at that fuel station was unique and we liked it a lot.

Mr. Zafar: A man in solemn fusion with the Holy Qur’an

We had the honour to know Mr. Zafar, a heartfelt benefactor of our schools in Lahore. Having known him, I also realized how truthful and solemn a lover of the Holy Qur’an he was. He was more than 70 years old, but led a life in fusion with the Holy Qur’an. He would generally receive his guests during the 45-minute segment before the maghrib prayer. He would not put down his Qur’an even when he received any guest at his home. When we asked him one day, he told us he routinely recited the Qur’an entirely once in two days. May Allah bestow him with a long and health life! Allah knows how many times he entirely recites the Holy Qur’an during a month of Ramadan!

Oh, the tarawih prayers! How exquisite they were! People would virtually flow to the mosques when it was time for the tarawih. Right after the last sunnah of the ‘isha prayer, the tarawih prayer starts. The imams lead the 20-raka’ah tarawih prayers by giving salaam after every two raka’ah. Almost all imams are hafiz – they recite the Holy Qur’an from memory. We witnessed that fact in every city we lived in Pakistan. We experienced comfort and serenity as in the meaning of the word ‘tarawih’ at all times. When the Holy Qur’an was recited during the tarawih prayers, it would be done in tarteel; without any haste and in proper order. In many masjids, the ‘isha and the tarawih prayers as combined last no lesser than 1 ½ hours. Between the salaams, the congregation recite salawat in praise of Rasulullah (sallAllahu alayhi wa sallam). After completing 12 rak’ats, the congregation is served water and so provided comfort.

It seemed the imam forgot what he had memorized!

During the Ramadan, classes are arranged at separate times in mosques for children and women to improve their recitation of the Qur’an. In mosques, men are given detailed information on this issue in the first days of the Ramadan  and they are encouraged to recite the Holy Qur’an intently.

In Quetta, there was a mosque very near to our home. I once planned to attend all the tarawih prayers during the month of Ramadan there, and – all praises to Allah – I managed it so. The imam was a hafiz and he also had a good knowledge of tafsir (the exegesis of the Qur’an). He also had the command on the meanings of the Qur’anic verses he would recite during the prayer. One day he stopped suddenly during the tarawih prayer and repeated a Qur’anic verse two or three times. I thought, “It seems the imam has forgotten what he memorized!” but that was not the case at all. Having recited the Qur’anic verse which meant “despite the repeated warnings of Allah, people were still ruined in the end”, the imam was simply overwhelmed. Never in my life can I forget that moment!

Towards the end of the month of Ramadan, you may see some places reserved for the i’tikaf – the seclusion for the sake of profound worship during the last 10 days of the holy month. Almost in every mosque, many people commit themselves for the i’tikaf. The last rows in mosques are partitioned with curtains for people to stay there and make the best out of those last 10 days for profound worship. They do not think about eating or drinking; they even do not care about it at all. As a matter of fact, they almost do not face such difficulties, because every day, some kind soul from the congregation offers iftari and sehri for those who are in i’tikaf. Of course, busying oneself in solemn worship for the sake of attaining the Laylat al-Qadr (Night of Power), which is hidden in one of the days of the holy month of Ramadan, and the arrival of the Eid in the end are two very thrilling experiences. On the 27th night of the Ramadan, the Laylat al-Qadr activities include ibadat (worship, especially the supererogatory prayers), tilawat (recitation of the Holy Qur’an), salawat (praising Rasulullah [sallAllahu alayhi wa sallam]) and dhikr (remembrance of Allah) until the sunrise in a very solemn manner. The day after the Laylat al-Qadr is usually declared a national holiday by the Government. Due to this, people can engage in worship with full attention. My Turkish teacher colleagues had witnessed this many times as well. After the congregational prayers during the month of Ramadan, the central mosques are usually kept open. I saw many people who feasted themselves on supererogatory prayers one raka’ah after another. Many times, I envied the way people expressed their servitude before Allah so attentively in prayer.

How the exquisite our months of Ramadan in Pakistan were!

I may conclude by saying, “I experienced the months of Ramadan, the tarawih prayers, and many instances of the Eid al-Fitr most duly in Pakistan!”