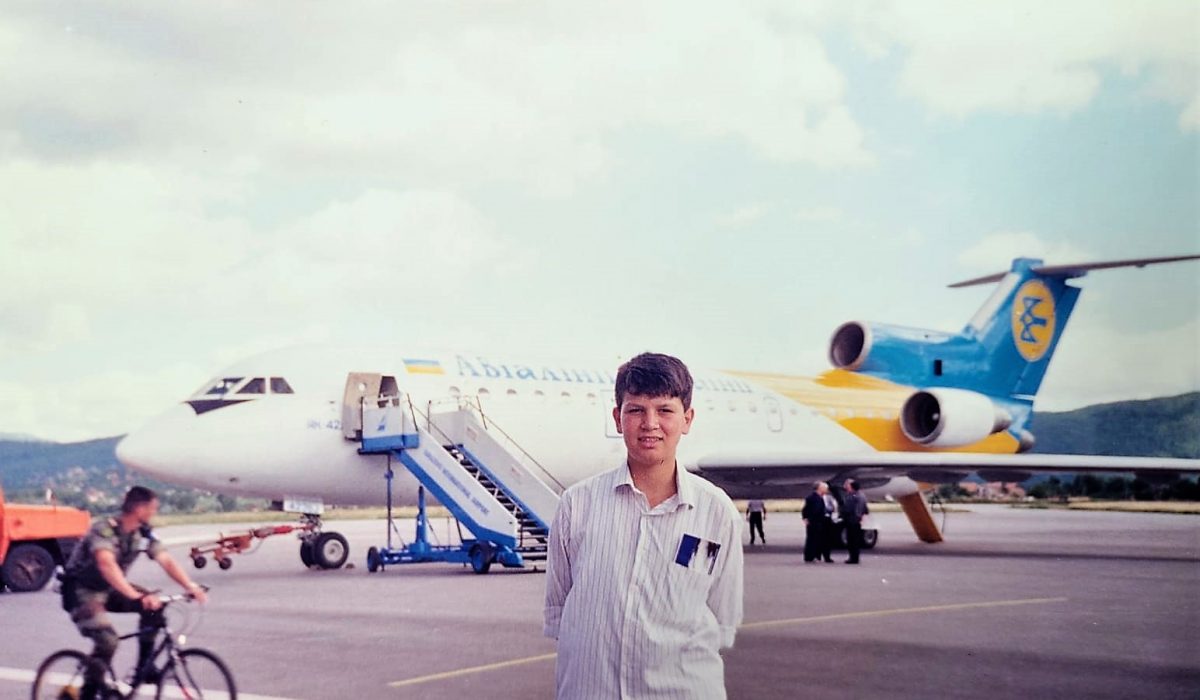 Taner Koçyiğit, studied at a university in Bosnia and Herzegovina between 1997-2001.

Education volunteer Taner Koçyiğit wrote about his colourful life in Pakistan, where he spent 14 years of his youth with the intention of ‘Hizmet’, having gone there at the expense of selling vacuum cleaners if necessary. In the first part, you will read how this journey started as a consequence of his insistence and determination.

I had spent four years in the Balkans and arrived in the steppes of the Central Asia. It was then the time for me to bid farewell from that cherished land of ancestors in the spring of 2003, just around the time of the Newroz that marked the advent of the spring. The teaching profession, which I had planned throughout my life and to which I impatiently wished to start, loomed on the horizon, or at least I thought so. Having graduated from the university in the middle of the term, I did not have the opportunity to start teaching in the country where I was… I had to wait until the start of the next academic year, but I also did not have much intention to remain patient for another six months.

I sent an e-mail to Mr. Halit Esendir, whom one of my relatives knew from the country where he worked before, saying, “I am ready to work as a teacher. If you wish, I may come to Pakistan directly without visiting Turkey. I can shoulder all duties.” The e-mail I had sent was answered on the next day. I do not remember having received an e-mail the content of which I was so curious about before in my life. This excitement gave way to surprise and despair as I read the e-mail completely: Mr. Halit had written “they looked for colleagues who would sell vacuum cleaners rather than work as teachers”. Frankly speaking, as a teacher candidate who was passionate about education and who concluded his email by saying “I do every duty for the sake of Hizmet!”, I never thought of selling vacuum cleaners. I later learned that Mr. Halit had made that proposal due to the financial difficulties experienced by the institutions there.

The interview at the vacuum cleaner company lasted very short

As I read the e-mail, my hope of starting teaching immediately faded, but when I realized from the details of the e-mail that the proposed task was also for the sake of ‘Hizmet’, I thought “I can both sell vacuum cleaners and teach for the sake of ‘Hizmet’”. Without hesitation, I sent the reply e-mail accepting the proposal for selling vacuum cleaners in Pakistan. Details of this unexpected job offer would come in the next email. I would be required to go to Ankara, meet with the CEO of the vacuum cleaner company and if he accepted our offer, I would be able to go to Pakistan as a sales representative.

I told the relevant company officials that two of my friends too wished to work in Pakistan in line with the same job offer and we set out for Ankara as a compact group of three. The interview in Ankara lasted very short. The CEO asked if we had ever sold vacuum cleaners before, of course our answer was “No”. Later, he asked if we had sold any product before, and the answer was again “No.” On top of that, he simply said, “There’s no point in asking further questions!”

Every day, I repeatedly checked my e-mails at an Internet cafe

The company representative informed us of the negative decision by phone two days later, as all three of us had predicted. The dream of selling vacuum cleaners in Pakistan was over before it even started. I had to send another e-mail to Pakistan and request another job position other than selling vacuum cleaners. I did that accordingly. Days passed one after another, but the reply I intently looked for receiving with the introduction,  “Mr. Taner,” did not come at all.

After six years of university education, I had returned to Turkey and been stranded even though I agreed for “the likelihood of even selling brooms, if it was about Hizmet.” I had no idea what to do for the rest of my life. It was like I was at a crossroads. I was e-mailing to Pakistan several times a day and visiting the Internet cafes many times every day expecting a positive or negative news. At that time, smartphones had not yet been invented, and the use of the Internet in homes was not common. This was why, the only way to send e-mails or check incoming messages was to go online at the Internet cafes.

I do not remember how I got out of the cafe that day and got home!

It was a Thursday, and I was in an Internet cafe in despair again. I saw an unread message when I signed into my e-mail account. I wanted all that ambiguity to end; I simply did not mind whether the incoming message was positive or negative. In fact, I guessed the e-mail was there to inform me that it was impossible for me to travel to Pakistan. I opened the e-mail and read it, then I do not even remember how I got out of the Internet cafe, and reached home!

I told my mother with great excitement that I should pack my luggage immediately, and said to my father, “We need to go for shopping quick.” I had to hurry because a phone number was mentioned in the e-mail with an additional note that the holder of that number would hand me my Istanbul-Islamabad ticket at the airport. The flight was on Saturday, in three days. I do not even remember how those three days passed, it was one of those rare times when I felt the mixture of excitement and happiness deep down to my bones. I was not told anything additional about my prospective job, but what really mattered for me was that I was eventually on my way there.

The pilot signalled that the journey would not be easy

It came to my mind that the school officials might have met with the company official in Ankara and convinced him about us selling vacuum cleaners, but as I said, it did not matter to me anymore. A new door of duty had opened for me after waiting for so long; I would not think about what awaited me behind that door. How would I be able to know that I would spend the most beautiful 14 years of my life in the country where I was travelling.

When I arrived at the airport on Saturday, March 15, the friend who had been waiting for me at the airport handed me my ticket and left after a short chat. After boarding on the plane, the pilot gave the first signal that my third trip abroad would not be easy: He said they had to revise the flight course due to a last minute update concerning the crisis in Iraq. I could not understand that at all because I did not even know why we had to cross Iraq on our way to Pakistan. The plane landed after a flight of about four hours. The first thing that caught my attention was that the luxury across the airport terminal. Everyone wore robes like Arabs. The boards and signs around were in Arabic.

I wonder if Pakistan is such a land of luxury?

That scene did not quite match what I had heard about Pakistan. I asked the first airport clerk I saw about my luggage, and when he looked at my ticket, he told me that my flight was connecting and that I was in Manama, Bahrain. Since I had never been on a connecting flight earlier, that was a moment of realization for me there and then. I had forgotten due to excessive excitement that my flight would certainly a connecting one. I remembered for a moment the thought of Pakistan likely being such a luxurious place and the thrill of that possibility immediately died on that spot.

After resting for about 24 hours in a hotel in Manama, I arrived in Islamabad on a connecting flight. When I took my luggage there and left the airport terminal, I expected the view I was to see would not be the same as I had seen in Manama, but I never imagined the conditions would be that difficult.