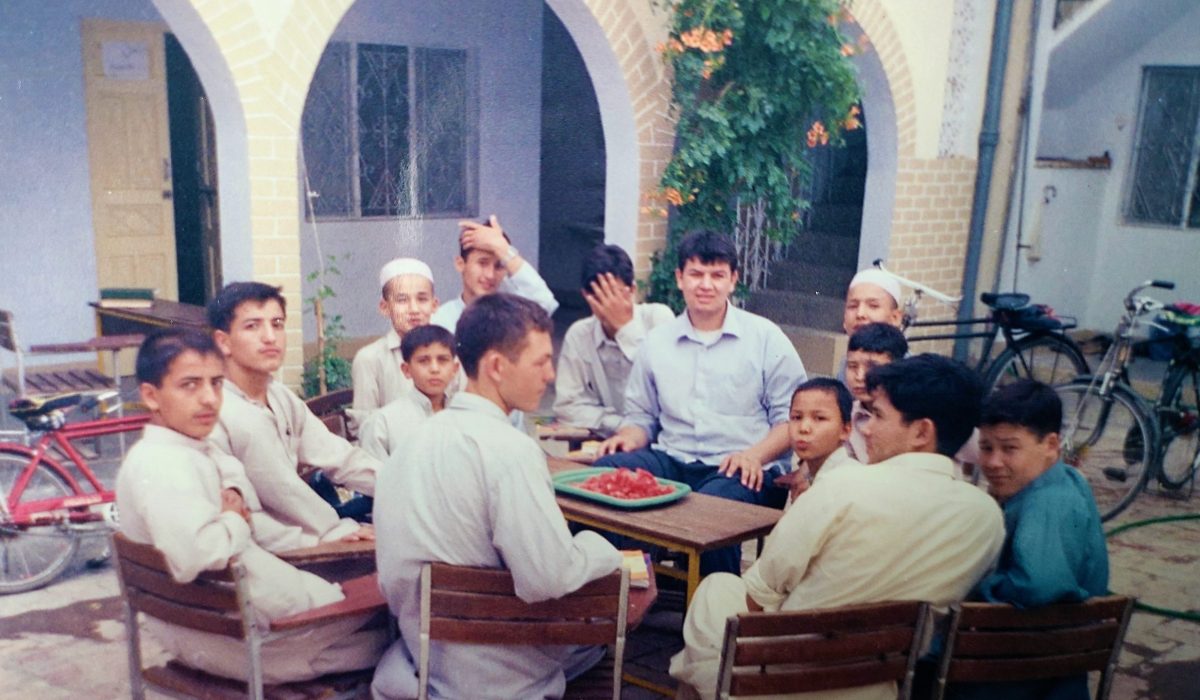 Taner Koçyiğit with his students at the garden of PakTürk School in Attock, where he worked...

Education volunteer Taner Koçyiğit wrote about his life in Pakistan, where he spent 14 years, having gone there at the expense of even selling vacuum cleaners if necessary, for the sake of “Hizmet”. In the third part, he narrated the community school in Attock, which was his first place of duty, the conditions under which he and his colleagues worked and the much-needed assistance provided by Mr. Tanvir, the owner of an Internet cafe.

Most of the Afghan refugees, including those of Turkmen and Uzbek descent, had settled in the vicinity of Attock. In 1997, a primary school had been opened by some volunteers in order to protect the children of the refugees living there from the harmful effects of extremist ideologies and to acclimatize the children with the mainstream education system in Pakistan.

When I first went to Attock in April 2003, two young teachers who had recently graduated from the private Turkish schools in Afghanistan and who had devoted themselves to the “service to humanity” were working day and night to meet all the educational needs of the community around the school. They both taught classes and conducted several after-school works such as parent visits. I started to stay in a schoolroom with these two teachers, a Turkmen cook and an Afghan university student studying in Pakistan.

Most of our students were the children of the Afghan refugees

At our school in Attock, almost all of the students were Afghan refugees. There were primary school students from the grades one to six. The student strength fluctuated almost every week as the students were the children of refugee families. Usually, there were between 80 and 100 students. In order for these students to adapt to the formal education system in Pakistan, we made a few curriculum updates with emphasis on language and science instruction.

Attock, the border city between the Punjab and the Northwest Frontier  (now Khyber Pakhtunkhwa) provinces, was also home to many Afghan refugees at that time. Those refugees, consisting of Turkmens, Uzbeks, Tajiks, Hazaras and Pashtuns, had lived in Pakistan for nearly 30 years. Pakistan had become the home of those people, but since many of them had their relatives across the border, they used to travel to Afghanistan frequently. Some of the lessons in the school were taught in Dari, the official language of Afghanistan. Unlike all other schools in Pakistan, our school’s weekly holiday was on Friday. On Sundays, the school was open.

During weekends, teachers would come from Peshawar

Since we did not have teachers in some school subjects, we also had to outsource volunteer assistance. Since the schools in other cities had their holidays on weekends, two of our teacher colleagues – Mr. Hasan and a colleague who taught Computer Science – used to visit Attock regularly to teach on voluntary basis. They used to attend their own classes in Peshawar for five weekdays and visit Attock on weekends – when they otherwise were meant to enjoy – to take classes in our school. They used to stay with us overnight and, after catering to students’ education for two days, they would return to Peshawar on the Sunday evening on a bus ride that took two hours to restart their routine there on Monday. Whenever they visited, we had to stay as seven people in our room; yet I never desire to change the delight and essence of those days with anything.

The interaction and the service milieu in that school was very conducive. When I first started teaching, I was very impressed by the sacrifices of those colleagues and the local teachers. We had to struggle with these friends against the many challenges in Attock. As at our institutions in the rest of the country, we also faced financial difficulties there. Most of the students in our community school were on scholarship and we could meet the financial needs of the school with donations from volunteers.

We divided the school tasks among ourselves

Cellular networks would not work in Attock at that time. The GSM operators had not yet started to provide services there. AT&T had a system similar to a landline phone that provided a substantially wide coverage; we could not obtain for the school because it was too expensive. We had a landline in our school but it was locked for outgoing calls. That was why, we used to go to a Public Call Office (PCO) when we needed to contact someone. In order to benefit from the discounted rates, we would call all our necessary contacts after 9 pm and try to get our tasks done altogether.

I and two local teacher colleagues divided the school tasks – such as accounting, student counselling, parent visits, admission procedures, cleaning, social activities, organizing after-school remedial classes for students, teachers’ timetables, and administrative duties – among ourselves. Moreover, we also had to teach English and Turkish classes. Since I was yet master these tasks, I would frequently consult with Mr. Osman, the principal of the PakTurk School in Peshawar. Later, with all our colleagues, we would hold meetings in our school and implement the decisions.

Mr. Tanvir helped all tasks round the clock

Meanwhile, I also wished to learn the Urdu language, but there was hardly anyone around me who spoke Urdu as a native speaker. Apart from the teachers at the school, I wanted to have friends to speak to me in Urdu. In the first weeks, I could not find friends for myself due to the intensity of the schoolwork. My first Urdu-speaking friend was a Kashmiri Internet cafe owner named Tanvir. Since there was no Internet connection at our school, we used to go to his cafe in the downtown. Thankfully, Mr. Tanvir helped us in all our work round the clock. A time came and we entirely relied on Mr. Tanvir in whatever we needed. He helped us with everything from establishing contact with the government departments to cleaning the sewer drain in front of our school. Actually, if we ever handled an issue without consulting him, he would take offense. Even though he was only as aware of the values ​​of education or ‘Hizmet’ as my (initially) broken English and Urdu, he was concerned about us and wished to learn more like the Hizmet-inspired volunteer philanthropic businesspeople from Turkey and the world. We had a great time with Mr. Tanvir during my tenure in Attock.

When it rains, drains get clogged and leak waste water to the streets

Let me explain a little bit more about what I mean about “dealing with the sewer drain” that I have just mentioned. In small cities like Attock, the wastewater discharged from outlets other than toilets flows straight from the houses to the open-air canals outside. These canals meander across the entire city until they reach the nearest creek. At the entrance to all shops and houses, there are canals about 50 cm deep and 30 centimetres wide. The general belief was that those canals consisted of only waste water from kitchens and bathrooms, but everyone knew that the WC water from some houses also blended into them. Those canals were frequently blocked, especially during the rainy season, and some streets would be flooded with waste water.

In November 2003, I had to leave our school in Attock. After sustaining the educational activities for some time more, the local teachers had to close down the school in the summer of 2004 due to serious irregularities in the attendance of the students.

I learnt Urdu from those who did know Urdu!

During my time at Attock, I and Mr. Tanvir had a habit of reading and discussion every week. After leaving the school, I continued to frequently travel from Islamabad to Attock. Mr. Tanvir and a few of his friends would read Urdu books and I would follow them from Turkish translations. I would participate in the discussions with my sketchy spoken Urdu. It would not be an exaggeration if I told you Mr. Tanvir was my first Urdu teacher. I later worked hard to correct the incorrect Urdu expressions I had learned from our non-native Urdu teachers and students. Even today I reply those who ask me “Do you know Urdu?” by saying, “I know Urdu as much as those who do not know Urdu!” This remained to me as a memory from Attock. In that way, I learned Urdu from those who did not know Urdu properly!

Part Two: I was in Islamabad, but no one was waiting for a person like me!