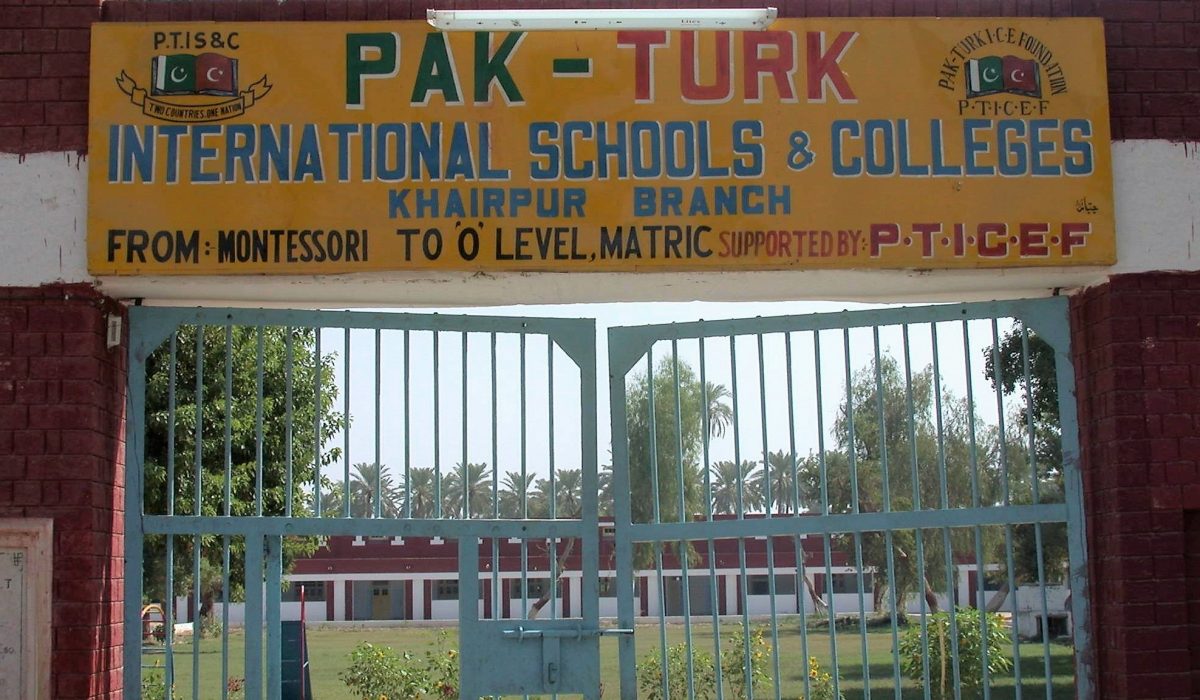 Educationist Sadullah Bayazit continues to narrate the opening process of the PakTurk School in Khairpur Mirs in the seventh part of the article series in which he writes his friend-in-fate Abdülgani Gülmez’s ‘life in emigration’. In this part of his memoirs, Bayazit wrote about the extent of progress shown by the school, which opened its doors to education on the exact timeframe as promised thanks to devoted efforts, in only one year and how the authorities were surprised to witness that achievement.

Under a tree in the playground of the campus allotted for the PakTurk School in Khairpur Mirs, a table and a chair bought from Sukkur are placed and a ‘clerk’ is tasked to crew the ‘front office’ where registrations for the prospective staff and students are received. On the other hand, there is a pressing deadline to complete the repairs and equipment of the classrooms with educational tools and furniture. Mr. Abdulgani and Mr. Miraj send a requisition to the PakTurk head office for the procurement of the play area toys and the equipment for the pre-school. In March 2002, five or six playground equipment arrive in trucks from Karachi. Mr. Abdulgani gets the open-air play area equipment installed adjacent to the spot where the open-air front-office is located. In almost no time, approximately 500 students from the public school located in the other wing of the large campus swarm the newly-installed play area and makes Mr. Abdulgani extremely worried by the possibility that the playground equipment may not last until the inauguration of the PakTurk School! 😊

In the meantime, ‘teachers wanted’ ads are placed in the newspapers. Consequently, 12 or 13 female teachers are selected from the applicants. After clearing their interviews with Deputy Director General Mr. Hassan Hussain, these young teachers travel to Islamabad accompanied with Mr. Miraj to attend to a Montessori-based pre-school in-service teachers professional development workshop in Islamabad. The fact a group of unmarried teachers are to travel a long distance and remain away from home for 15 days makes their families considerably worried. This is why some of the teachers are chaperoned by their mothers for their journey to Islamabad. At that time, there is a dormitory in Islamabad where 15 university students are accommodated. Five or six rooms in the ground floor of that dormitory are allotted to the visiting female teachers and their chaperones from Khairpur Mirs.

As promised, education in the school started in April

New teachers of the Khairpur Mirs branch attend to the morning classes of the PakTurk pre-school teachers in Islamabad for two weeks as observers and assistant teachers. In the afternoons, they attend to professional in-service training workshops and learn the essentials of the Montessori system. Nine of those teachers start teaching in April 2002, and the rest start teaching in September 2002. Meanwhile, the chaperoning mothers observe how securely the dormitory and its facilities have been arranged for their daughters and, after staying in Islamabad for a couple of days more, they return to Khairpur Mirs. In the forthcoming years, the same teachers continue attending to several other intercity in-service training workshops and social programs.

In April 2002, all nine classrooms in the allotted wing of the campus are ready with a mild delay of almost a week after the official opening of the schools in the district. Two administrative rooms and one computer room with six or seven computers from Karachi attract great attention during the inauguration visit. The school opens its doors to education with 9 teachers and 75 students in a three-tiered pre-school besides Class 1 and Class 2. The newly-painted and renovated part which has been allotted to the PakTurk Schools from the large campus shines bright and is prominent. What’s more, a small amount of money has been spent for achieving all those.

An inauguration program is planned with the attendance of Mr. Halit and Mr. Hassan Hussain from the Head Office along with some other educationists from PakTurk Schools. Before leaving Islamabad, the guests take along some educational materials such as posters, charts, and bulletin boards that are needed for decorating the classrooms. When they reach Khairpur Mirs, the guests got off the train along with their boxes of equipment and start waiting their host Mr. Abdulgani to arrive in a minibus. After waiting for a considerable time and having not been able to meet Mr. Abdulgani until then, they hire the services of a horse-cart rider who hauls light cargo in the city. Mr. Hassan Hussain Bey and Rajab – Mr. Abdulgani’s assistant in Khairpur Mirs – ride on the horse-cart and accompany the cargo. Later, Mr. Abdulgani, who has been waiting in a minibus to pick up the guests, finally manages to find them. It is later revealed that while he has waited in front of the train station, the guests have got off on a platform facing the other side.

When the 10-person delegation from Islamabad reaches the school, they are astonished by its finish. Since the teacher training centre and its adjacent lodgings – previously considered to be included in the scheme – have already been vacated for another official purpose, the inauguration guests are not able to stay there. Eventually, one of the pre-school classrooms is vacated of its furniture and, on the wall-to-wall carpeted floor, the sleeping mattresses, cushions, pillows, and bedsheets that have recently arrived from Quetta are spread for the guests to spend the night there. The dormitory building and an adjacent lodgement are used for accommodating the unmarried teachers and teacher assistants.

No air conditioning was installed because there was no electricity!

On the next day, the inauguration ceremony is held. The zila nazima and other government officials grace the function. After the ceremony, the foundation officials and guest educationists working at other PakTurk schools stay in Khairpur Mirs for a couple of days more to plan and discuss the prospective repairs and renovations across the school complex. Thanks to the sacrifices made, the repairs in the dormitories and additional buildings are completed at a price well below the market conditions. The public school on the other wing of the campus – across the playground – remains there until the summer break. Accordingly, the PakTurk Khairpur Branch shares the same playground with a public school for about two or three months.

Although the temperature averages between 45 and 50 degrees in April and May, there is no mention of air conditioning for any classroom or administrative room. Ever wondered why? Because there is no electricity to run the air conditioners. If there is electricity, there are frequent and long-term power outages. The voltage also falls fairly low even after the power is restored. What’s more, fans and other electrical appliances often go out of order due to voltage fluctuations.

Mrs. Öznur and her husband arrive from Islamabad and so become the first-ever Turkish educationist family to settle in Khairpur Mirs. Mrs. Öznur is there for teaching English in the school. Her husband Mr. Günay first supports the preparations for the school to open its doors to education and later teaches Islamiyat there. For this first Turkish family in Khairpur Mirs, Mr. Abdulgani and his colleagues have prepared the lodgement adjacent to the entrance of the school. Nevertheless, due to a couple of missing points noticed in the lodgement in the last minute, the family first stays in a city hotel for a week. When they arrive in Khairpur Mirs, the parents also hold their 40-day-old baby in their arms. Since even the ceiling fans do not help much to soothe one in Khairpur’s heat, the baby constantly gets nappy rash and the family soon has to install an old window-type air conditioner in the lodgement.

Officials surprised by the progress made in only one year

During the summer break, Mr. Miraj – the founding principal of the PakTurk School in Khairpur Mirs – returns to Turkey. He is temporarily replaced by Mr. M. Necmettin. Mr. M. Necmettin and Mr. Abdulgani spend their first summer together in 2002 in Khairpur Mirs. Since they have to open higher classes after the summer break, the duo also seeks ways to obtain the equipment of those classrooms. During the summer of 2002, two or three large containers of desks, student chairs, tables and other school equipment that may otherwise be locked in storage for many years due to the new purchase of equipment for a private school are sent to Pakistan. Those materials are received at the Karachi Port and delivered to Khairpur Mirs in August 2002 by trucks. As a result, the classrooms in PakTurk Khairpur Mirs are furnished with very modern desks and student chairs as compared to other schools in the city. In September 2002, the late Adem Köse is appointed as the principal of the school.

Within that one year passed from the time of its inauguration, the PakTurk School in Khairpur Mirs makes great progress. As of April 2003, the entire school complex has been allotted for the use of the PakTurk School and all rooms have been repaired and renovated. In September 2003, the secondary school section opens and the number of students exceeds 1000. Watching the beautiful performances of the students during the end-of-the-year program held in the large tent set up in the playground of the school a year after its inauguration, the state officials cannot hide their astonishment about the progress made by the school within such a short time.

Part Six: Pangs of converting an old building into a school in Khairpur Mirs