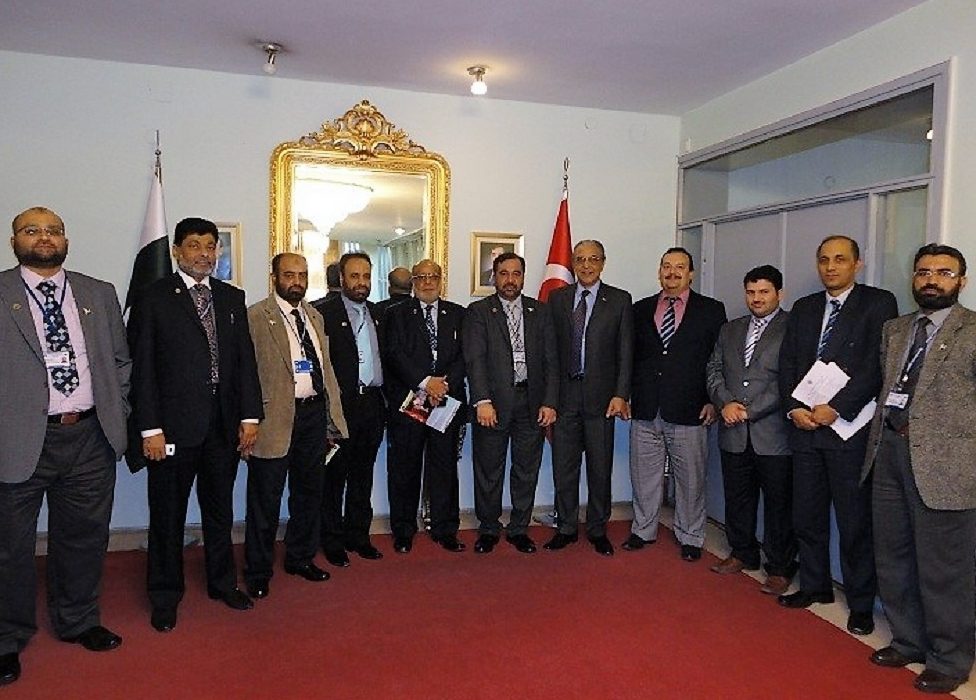 Besides his teaching duty at the PakTurk Schools, educationist Doğan Yücel also volunteered in the businessmen’s association established to develop the trade between Pakistan and Turkey. Yücel explained the details of the Turkey tour they organized with the president and members of Karachi Chamber of Commerce and Industry in 2011.

We offered our fajr prayer at the Eyüp Sultan Mosque, watched the sunrise from the Pierre Loti Hill, and had breakfast with a group of Turkish businessmen at the Halid Paşa Mansion. We chatted pleasantly. Afterwards, we toured the Miniatürk and shopped at the Cevahir Shopping Center. We walked along the Bosporus near the Yıldız Palace and had tea at a nice cafe. We had our dinner in Eminönü.

We shopped at the Grand Bazaar on Monday. After visiting the Blue Mosque, Topkapi Palace and Hagia Sophia, we toured the Sultanahmet district. We visited the Basilica Cistern and the Islamic Science and History Museum in Gülhane. After eating at the Sultanahmet meatball restaurant, Pakistani businessmen joined business-to-business meetings at the Istanbul Chamber of Commerce. The high officials of the Istanbul Chamber of Commerce (ITO) and the Karachi Chamber of Commerce and Industry (KCCI) re-signed the formerly signed commercial cooperation agreement for implementation.

KCCI delegation met with the ITO Board Member Muhammet Yenel and other officials. The president of the ITO was abroad back then. Yenel warmly welcomed the KCCI delegation and in his speech said, “Pakistan and Turkey are two countries but one nation. Pakistan is a potential destination for bilateral trade.” He stated how the brotherhood between Pakistan and Turkey dated back decades and both countries showed great similarity in terms of culture, morals and norms. Yenel said the two countries were important to each other and that businessmen and institutions had vital roles to develop commercial ties. He stated both countries could cooperate in many fields such as construction, telecommunications, energy, textile products and machinery, furniture, PVC pipes, and agricultural machinery. Emphasizing that the ITO, with its over 300,000 members, would provide Pakistani business community the strongest possible support to strengthen the Pakistani economy, Yenel added that the proposed protection measures regarding the import of textile products should not be imposed on Pakistan.

KCCI President Saeed Shafiq stated that the relationship between Pakistan and Turkey was based on religious, cultural and historical ties. He emphasized the Pak-Turk friendship ties would continue forever and Turkish entrepreneurs should invest to revive the Pakistani economy. Shafiq emphasized wind and solar energy as two sectors with high potential for the future. He said Pakistan’s image and standing need to be improved worldwide and Pakistan should be represented through its true aspects as a country full of tremendous opportunities and friendly citizens. Shafiq emphasized the urgency for introducing a Preferential and Free Trade Agreement between Pakistan and Turkey and invited the respective chambers of industry to do their part to persuade the governments of both countries. He also stated the proposed protection measures for textile exports from Pakistan and other countries in the region would impose heavy measures, and therefore, sister country Turkey should grant an exemption to Pakistan. The meeting ended with a joint decision to increase bilateral trade ties and strengthen the relations between the KCCI and the ITO.

On the same day, we were invited to dinner with the members of the Business Life Association (İŞHAD). On the last day, Pakistani business delegation held meetings with the foreign news service editor of daily Zaman and a group of experts and columnists in economics and international relations. KCCI President Muhammad Saeed Shafiq visited daily Zaman, which had a circulation of over 900,000, and Today’s Zaman, an English daily. Here, the Pakistani delegation exchanged ideas with the Turkish journalists about the role of Turkish media in economy. The KCCI delegation also held an interactive session with Jeff Moseley, President and CEO of the Houston Chamber of Commerce of the USA, and Celil Yaka, President of the Texas Turkish-American Chamber of Commerce, who visited daily Zaman around the same time.

During our visit to Fatih University, we met with some administrators and faculty members. This visit aimed to see ​​how the Turkish universities encouraged the youth to become entrepreneurs. The delegation also wanted to know what the private sector did to raise the education level of the country and what funds the business community provided to open modern educational institutions. The Istanbul Chamber of Commerce also operated a university and a high school. During the meeting at the Fatih University, KCCI President Shafiq informed the authorities that the KCCI members were on the boards of directors of some private sector universities and that they wanted to exchange ideas to improve academic excellence and encourage entrepreneurship among young people. He also explained his campaign to encourage young people to become self-employed and his plans to organize workshops and seminars in this context. He also noted that a ‘Connect Pakistan’ program was underway at the KCCI to connect academia with industry.

Delivering a presentation on the Fatih University, Prof. Dr. Murat Karagöz explained how the Turkish government (back then) prioritized education and highlighted the determination of the private sector to support education. On the same day, we shopped in Büyükçekmece district, where the university campus was located, and rushed to the Ataturk International Airport after dinner to take our flight to Pakistan.

During his sojourn in Istanbul, KCCI President Muhammad Saeed Shafiq had several interactive meetings with Pakistan’s Consul General in Istanbul Dr. Yousaf Junaid, who was also the Head of Trade Department at the Embassy of Pakistan in Ankara. Dr. Junaid Yousaf informed KCCI President Shafiq about the latest developments regarding the Pak-Turk bilateral trade. The Consul General appreciated Shafiq for bringing a KCCI delegation to Turkey and holding business interviews. An agreement was signed between the Consulate General of Pakistan and the KCCI to maintain an effective liaison on commercial information exchange, inquiry and other necessary matters.

During the trip, various meetings were held to exchange ideas on trade and industry in Pakistan, investment opportunities, and customs clearance. Additional talks were held to improve Turkey’s exports and imports with Pakistan. Speeches and presentations were delivered in 13 locations in Ankara and Istanbul. First-hand responses were provided to questions about bilateral trade opportunities.