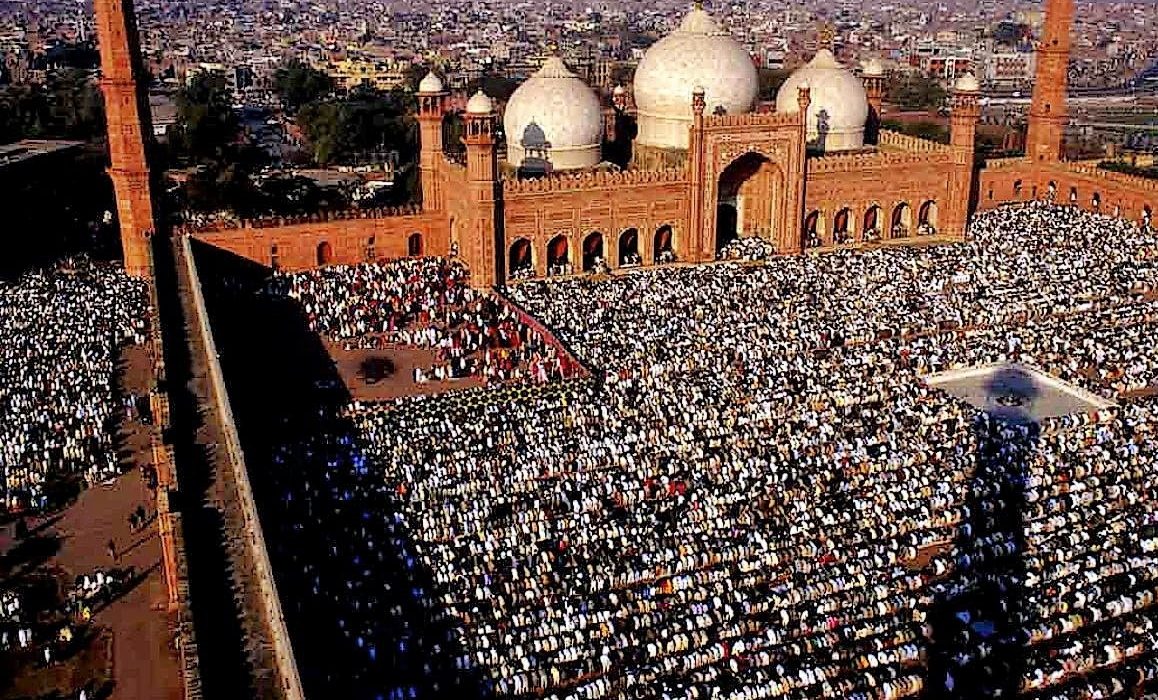 Researcher and educationist Doğan Yücel wrote about the Badshahi Masjid in Lahore, considered one of the most significant religious and cultural buildings in Pakistan. Yücel explained the stages of the masjid from its construction to the present, how it was used during the Mughal, Sikh, British and Pakistani periods and what changes it went through.

Badshahi Masjid is a ‘Jum’a Masjid’ i.e., central congregational mosque for the Friday prayers built by the Mughals in Lahore, the capital of the Punjab province in Pakistan. The masjid is located to the west of the Lahore Fort, adjacent to the Old Lahore called the Walled City and is considered one of the oldest masterpieces of the city.

Badshahi Masjid was commissioned by the Mughal Emperor Aurangzeb and was built between 1671 and 1673 within only two years. It was considered the world’s largest mosque for 313 years from 1673 until 1986 when the Faisal Mosque was built in Islamabad. Badshahi Masjid is one of the few significant architectural monuments built during the long reign of Shah Aurangzeb between 1658 and 1707. It is a prominent example of the Mughal architecture in terms of its exterior decorated with marble inlay and carved red sandstone. It remains the largest mosque from the Mughal era and is today the third largest mosque complex in Pakistan. Badshahi Masjid is still considered one of the most illustrious religious and historical monuments of Pakistan. Although it was built at the end of the relative decline of the Mughal Empire, no other monument in Lahore reflects with its beauty, elegance and size such a high architectural taste of the Mughals.

The entrance to the mosque is on the west side of the rectangular Hazuri Bagh (Royal Garden) and faces the famous Alamgiri Gate of the Lahore Fort, east of the Hazuri Bagh. The mosque is also next to the Roshnai (Lighting) Gate, one of the thirteen main gates of Lahore, on the south side of Hazuri Bagh.

The location of the mosque and the significance of the place

The sixth Mughal emperor Aurangzeb chose Lahore as the site of the new imperial mosque. Aurangzeb, unlike his predecessors, was not a major patron of the arts and architecture and, for much of his reign, he focused on military conquests adding over three million square kilometres to the Mughal Empire.

The mosque was commissioned by the Mughal Emperor Aurangzeb in 1671 to be built under the supervision of the emperor’s half-brother and Lahore Governor Muzaffar Hussain, also known as Fidai Khan Koka. Badshahi Masjid was also built to commemorate Aurangzeb’s successful military campaigns in South India, especially against the Maratha King Shivaji. It was commissioned by Aurangzeb directly opposite the Lahore Fort and the fort’s Alamgiri Gate to emphasize its key significance.

The condition of the Badshahi Masjid under the Sikh rule

On July 7, 1799, Ranjit Singh’s Sikh army conquered Lahore. After the conquest, Maharaja Ranjit Singh used the large courtyard of the mosque as a stable for his army’s horses and the 80 cells (small lecture rooms surrounding the courtyard) as barracks and equipment warehouses for his soldiers. In 1818, a marble structure, known as Hazuri Bagh Baradari, was built facing the mosque and used as the official royal open-air court by Ranjit Singh. When Englishman William Moorcroft visited Lahore in 1820, he noted that the mosque courtyard was used as drill grounds for cavalry and infantry.

It is thought the marble slabs used in constructing Baradari may had been looted by the Sikhs from other historical buildings in Lahore. After Ranjit Singh’s death in 1839, his son and successor Harak Singh constructed a samadhi in memory of his father, on a site adjacent to the mosque.

20 years later, a moderate earthquake struck Lahore and the delicate marble domes on top collapsed. During the Sikh Civil War of 1841, Ranjit Singh’s son Sher Singh used the mosque’s large minarets to house zambura or small arms to bombard the supporters of Chand Kaur who took refuge in the besieged Lahore Fort. In one bombardment, the Dewan-e-Aam (People’s Court) in the fort was destroyed, but was later rebuilt during the British period. Henri de La Rouche, a French cavalry officer working in Sher Singh’s army, used the Badshahi Masjid temporarily to store gunpowder in a tunnel connecting the Badshahi Mosque to the Lahore Fort.

The vacant plot (Hazuri Bagh) between the fort and the masjid was a parade ground where Aurangzeb would oversee his troops and the court gentry. Built on a six-metre plinth to help prevent flooding, the Hazuri Bagh is positioned at a lower level than the Badshahi Masjid. Today, this area continues to be a place where foreign statesmen visiting Lahore are hosted on functions.

Changes made during the British rule

In 1849, the British took control of Lahore from the Sikh Empire. During the British Raj, the Badshahi Masjid and the adjoining Lahore Fort were used as military garrisons. The 80 cells built into the walls surrounding the large courtyard were demolished by the British after the 1857 Great Uprising to prevent them from being used in counterattacks. The cells were demolished and replaced with open passages known as ‘cloisters’.

Due to growing Muslim discontent with the masjid’s use as a military garrison, the British established the Badshahi Mosque Administration in 1852 to oversee the restoration and re-establish the mosque as a place of worship. In time, fragmentary repairs were made under the supervision of this administration. The building was then officially returned to the Muslim community by the Governor of India, John Lawrence, and was eventually reopened as a mosque.

In April 1919, after the Amritsar massacre, about 30,000 mixed crowd of Sikhs, Hindus and Muslims gathered in the courtyard of the Badshahi Masjid to lodge protest. A speech by Gandhi was read at the event by Khalifa Shuja-ud-Din, who later became the Speaker of the Punjab Provincial Assembly.

Extensive repairs began in 1939, when Sikandar Hayat Khan raised money for this purpose. The renovation was supervised by architect Nawab Alam Yar Jung Bahadur. After his death, Khan was buried in Hazuri Bagh, adjacent to the Badshahi Masjid, for his services to the extensive restorations to the mosque.

Listed as a UNESCO Heritage Site after independence

Various repairs have been made to the mosque. In 1939, a comprehensive restoration began under the supervision of architect Nawab Alam Yar Jang Bahadur. These works continued after Pakistan’s independence and cost Rs. 4.8 million in 1960. On occasion of the Second Islamic Summit held in Lahore on February 22, 1974, 39 Muslim heads of state, including Zulfikar Ali Bhutto of Pakistan, Yasser Arafat, Sabah III al-Salim al-Sabah of Kuwait, King Faisal of Saudi Arabia and Muammar Gaddafi of Libya performed the Friday prayer at the Badshahi Mosque. Maulana Abdul Qadir Azad, the then-orator of the mosque, led the prayers.

Near the entrance of the Badshahi Masjid is the tomb of the National Poet of Pakistan Allama Dr. Muhammad Iqbal, widely regarded as the founder of the Independence Movement of Pakistan which led to the founding of Pakistan as a homeland for the Muslims of the Subcontinent. Within the compound is also the tomb of Sir Sikandar Hayat Khan, known to have played a key role in the preservation and restoration of the Badshahi Masjid.

Badshahi Masjid was included in the tentative list as a UNESCO World Heritage Site in 1993. In 2000, the marble inlays in the main place of worship were repaired. In 2008, the renovation of the red sandstone tiles in the large courtyard of the mosque started using red sandstone imported from the original Mughal quarry near Jaipur in Rajasthan, India.