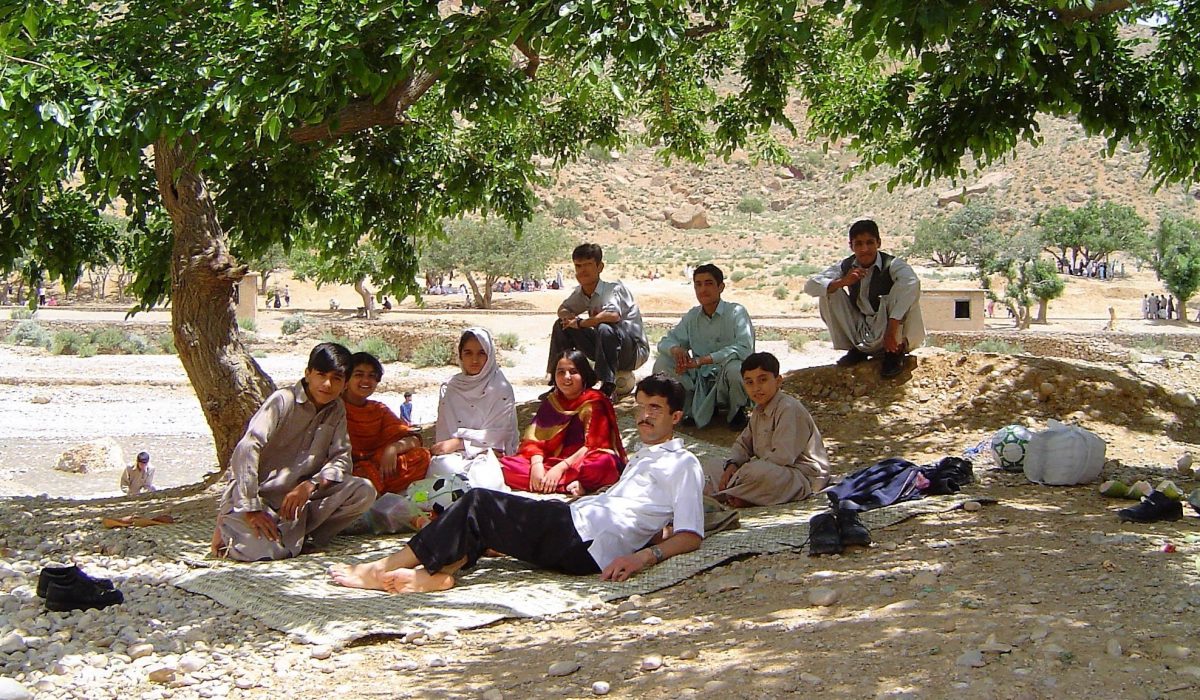 Educationist Taner Koçyiğit wrote about the climate of Quetta and the scarcity of picnic areas in its vicinity. He told about his experiences at a picnic place he and his colleagues had found after a long search and the return journey full of adventure.

Contrary to popular belief, Pakistan is a very green country with abundant water, mild weather, rice fields in wetlands, and swelteringly humid and hot climate due to monsoon rains in summers. Although the climate of most of the country is like this, the climate of Quetta and other cities in Balochistan is partially cool and almost rainless. This is why, the city and the province generally have a terrain with scarce trees and limited greenery.

Out of the Balochistan province, which has mountainous terrain, it was easy to find picnic and recreation areas because the climate was conducive in other regions and many waterfronts or parks could be visited as family in or outside cities. In Quetta there was no park in the downtown, and there were almost no outdoor recreational areas suitable for families. Whenever we found a canopy of a few trees, we would exclaim, “Oh! Here’s a nice picnic spot!” and we would go there. One place that haunts my mind is the area in the downtown with a few trees, where I never saw a woman, but was called the ‘Ladies Park’.

What they called a ‘river’ was a ‘canal’

Thinking ‘Maybe we don’t know; local people know beautiful places’, we asked students, parents and fellow teachers. We would go to those places, no matter if they were near or far. We became very happy to learn about a lake called ‘Hanna Lake’ with picnic tables around it. It was half an hour away from the downtown and it was highly recommended. They even said a river with exquisite water flowed into the lake. Because of that information, one day we took the students to the mentioned place. We found the picnic tables around the lake, but we could not sit down as there was not a single tree to provide some shadow. We walked towards the river said to be farther. The students exclaimed, “Here’s the river! Here comes the water, hooray!” I got excited and I looked around, but I could not see a river or anything. Let alone the river, a brook could not excite the children, because water flowed in a canal of at most 70-80 cm wide and 10 cm deep. The canal bed was wider, but water was not plenty. I remember thinking, ‘If even that little water excites the students, the picnic affair here is really a heartache’.

Around the small pond we said, ‘It’s okay if we also find a tree,’ and sat under the first tree we found. Although that picnic area was not what we wished, it was the only place we could go in Quetta. Since all Quetta residents frequented the same place, we often could not find a place to sit under the trees, which were all just a few, and we used to return after having quick bites on a tablecloth spread on the ground under the sun.

We reached the picnic site in two hours by bus

One day we decided to go on a picnic with all the teachers in the school. We looked for alternatives. One of our local colleagues talked about Bolan, a place close to Sibi, said to have a stream and trees for which people even came from far for picnic. The only thing we were looking for in an ideal picnic spot was cool shade and greenery. After confirming the beauty of the proposed picnic spot with a few other people, we rented a bus for about 40 people. We prepared and set off early in the morning on a day when the weather was not too hot. After a journey of over two hours, we reached the picnic spot.

We had reached our destination, but the river termed a ‘great stream’ was nowhere to be seen. The river bed could be discerned from the worn gravel at both sides, but there was no water. We drove on that gravel road in a huge bus and arrived at a place with a few palm trees. When we looked around, no other trees or shady spots were visible nearby or on the horizon. We decided that would be the most suitable place for a picnic. We sat on rugs under the trees and started the preparations for the picnic.

It was one of the hottest spots in the world!

The place we found was not a place worth travelling that far. There was no water in the riverbed. In addition, where they said so many trees, the total did not exceed the number of fingers of one hand. Shortly later, we realized there was a small creek in the distance and we thought we should walk in that direction, Meanwhile, there were no trees to provide us shade there. We stayed in our original place under the trees. We male teachers went to that little creek to swim, and the ladies prepared for the meal. We returned after having some fun in the creek and ate our meals. It was then the time for the return journey. Local colleagues were saying, “We came to a wonderful place,” but the weather was so hot that we had trouble breathing. We learned later that Sibi was one of the three hottest places in Pakistan. In the past years, the city even broke a temperature record as “the hottest spot in the world”. We did not tell this to our local friends who took us to the picnic, but I guess we never encountered that much heat at any picnic.

The picnic was over. We loaded the things on the bus and got on to start our return journey. We were to return through the path of our arrival, through the riverbed, because there was no other way. The bus drove a little on that gravel path, but just as it approached the main road, it suddenly stopped in the riverbed. We all got off and looked to see what happened. The bus was stuck in mud. Even though we struggled for hours under the heat of Sibi, we could not get the bus out of the mud. But it was getting dark and we all had to return to Quetta soon for our safety. No bus passed from the main road near us. Even normal vehicles were scarce.

The journey of ladies in the truck, smelling of manure

We were trying to signal and stop all passing vehicles, so we could at least send the ladies. When we could not find another vehicle, we finally stopped a light truck. The driver had hauled cattle from Quetta to Sibi and was on his way back. Normally, the truck bed was not so clean, it still had some dung and manure. We tried to clean it to the best as we could. We decided to lay cloth sheets on the floor and send the ladies with this truck. The female teachers would go on a bumpy two-hour journey in that open-top truck, sitting on the smelly truck bed. 😊 They did not volunteer, but there was nothing else to do. Everyone was tired and wanted to get home soon. We sent all ladies to Quetta by truck accompanied by a male teacher.

We men waited on the road to find another vehicle. Meanwhile, the driver called someone to recover the bus. “Wait, we’ll go together tonight!” he said. Good thing we didn’t wait, because we discovered later, the bus remained there for over 24 hours. We were trying to stop all vehicles passing by, big or small, by waving our hands. We could stop no one until it got dark.

We returned to Quetta on top of a van

Soon an 18-wheeler stopped but the driver said he could take only two people. Two friends went with the that truck. As the remaining seven, we stopped a minibus late in the evening, but there was room for three in the vehicle. The principal and his wife sat inside the vehicle. There were no seats left for us, but there was a luggage rack on the top of the vehicle and we would sit there somehow. We begged, “We can sit on top of the van, just take us away!” we said. The driver hesitated as they had to go fast, but when we insisted, he agreed. We travelled for over two hours with five friends and picnic bags on top of the van.

The weather was critically hot in Sibi but it cooled as we approached Quetta. Due to the speed of the vehicle, we reached Quetta through a tough journey by holding on tightly to the luggage rack. We grasped the luggage rack all the way in order not to be hurled from the top every time the van turned a sharp bend on the road. We learned that the teachers who had left by truck had just arrived in the city. That picnic was the first and the last picnic we had with the teachers at the school.

Part Thirteen: The second-hand goods market in Quetta and the things we bought and sold