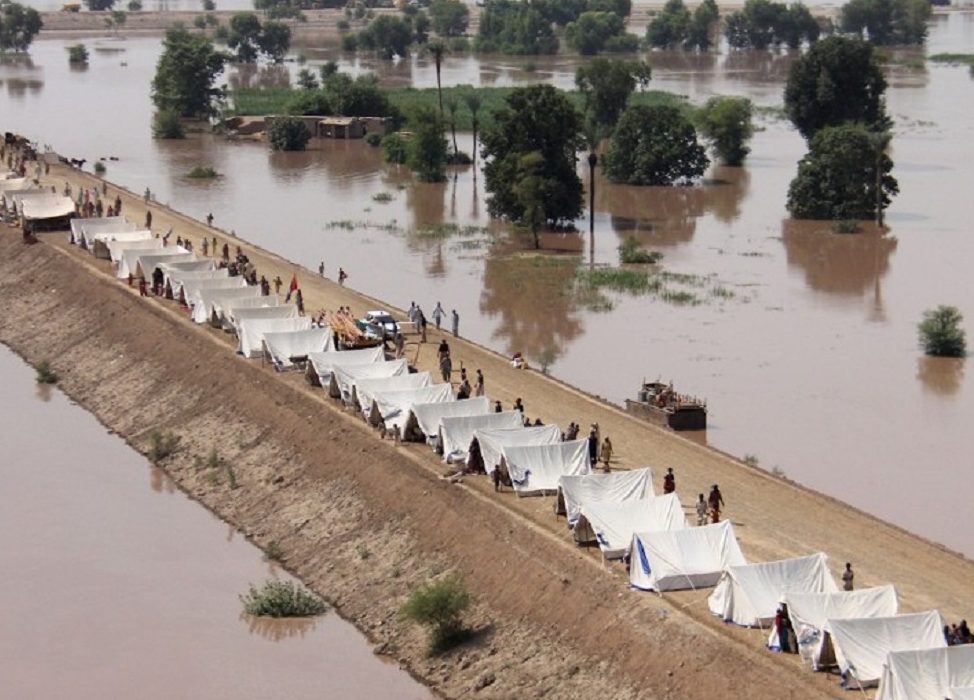 Educationist Doğan Yücel wrote about the Qurbani meat distribution programs organized in Pakistan after the devastating flood disaster in 2010. He explained how the sacrificial meat were distributed in Dadu, Sindh province with volunteers visiting from Turkey.

After the flash-floods triggered by the torrential monsoon rains in 2010, we were to organize the qurbani relief activities to be carried out by our educational foundation in Sindh. We formed relief teams with friends to visit four or five cities hit heavily by the flood. I and Mr. Huseyin, who had just arrived in Karachi back then, took charge of distributing the relief materials in Dadu. Built on the banks of the River Indus, Dadu is a city of 500,000 people. It is also cited among the places where security problems are experienced the most in Pakistan. Since the Thar Desert stretches near, the region is scarcely populated.

To carry out the aid organization in that region safely and properly, it was necessary to get the help of the local administration. With this in mind, we requested the Sindh State Minister for Education, who hailed from the same region, to act as an intermediary. He had been to a trip to Turkey with our school principal, Mr. Mesut. We frequently consulted him at different occasions. We visited the Minister in Dadu. It was the Teachers’ Day and we walked with him in the Teachers’ Day march. On Google Maps, he pointed at the places inundated by the flash-floods, highlighted the breach points along the Indus where the embankments collapsed and gave his estimation how long the floodwaters would take to reach Dadu. According to estimates, in a week or ten days, the city would be inundated. Villagers were evacuated to places far from the river bank in tractors and trucks. People did not want to abandon their homes, belongings, fields and livestock. Yet if they stayed, they would die. Helped by law enforcement, the state officials continued to evacuate them by force at times.

Actually, no embankment had collapsed around Dadu; further north near Rahim Yar Khan, embankments were deliberately demolished in several places to avoid damage to urban areas. In that way, the waters moved behind barriers. They piled up sandbags on the Indus riverbank near Dadu. We requested the Minister to refer us to the camps set for the flood survivors to fulfil our relief activities escorted by law enforcement. The camps in Karachi and Thatta were found more feasible, because evacuations continued and the extent of the flood was unknown.

The floodwaters reached near Dadu as anticipated. A significant portion of floodwaters flowed into the Manchar Lake. At a point between Dadu and Hyderabad, the overflowing waters drained into the Indus again by breaking embankments. In that way, downtown Dadu could be saved from being flooded. However, some 300 villages were submerged under the waters of the Indus, which swelled to 38 km in width. When the flood hit the area, we started the relief activities once again. The waters had not yet receded.

We shoehorned the car into the boat and crossed the floodwaters

A few days before our tour of the flood-affected region, I had gotten the contact number of the district governor of Dadu from the Sindh State Minister for Education. I phoned the Governor and requested an appointment to discuss the distribution of relief materials. We had to leave the day before to meet him on time for appointment. Friends in Karachi said, “It will not be safe for you to travel in your personal car” and so we rented a car. We were two people on that trip. The embankment near Manchar Lake had been demolished by the officials for draining the floodwaters on the road to Dadu. That was why we had to cross the floodwaters by boat. Everyone travelled to the other side of the embankments in boats. We rented a small hauling boat but the width of the boat was smaller than the car’s length. We loaded our car longitudinally on the boat. After fastening the wheels of the vehicle to the sides of the boat, our 10-minute boat ride started. Just in case, we got out of the car. I still do not know how we dared to take that boat ride. Luckily the car did not topple and the boat did not capsize. We rented larger boats on our subsequent tours to the flood zone.

We checked in at the slightly better one of the two hotels in the city. In the morning, we visited the Governor’s Office, explained the Governor about our plans for the flood relief and qurbani activities on the Eid al-Adha, and requested his assistance. He phoned the district director of agriculture and asked him to assist us. We went to the office of the district director of agriculture. He welcomed us kindly and said they would allocate a barn of the directorate for the sacrificial animals. We went to see the barn; it was large enough to house 1000 animals easily. In addition, in front of the barns was a large lawn suitable as slaughter ground and a building for storing meat.

We returned to Karachi. With Mr. Huseyin, who had accompanied me during our tour to Dadu, we volunteered in supervising the slaughtering and meat distribution of 300 cattle. As the Eid al-Adha approached, prices kept on increasing, so we paid a portion of the agreed price up front to our Turkmen associate who had to purchase the sacrificial animals. Two months in advance, he hauled in trucks the sacrificial animals he had purchased from the surrounding regions to the place allotted by the district director of agriculture in Dadu. He also arranged fodder and hay for the animals.

Days passed and the Eid al-Adha approached. During those two months, we visited Dadu, an eight-hour drive from Karachi, a few more times in my personal car. We visited there for the last time about a week before the Eid. Veterinarians from the agriculture directorate checked the sacrificial animals and replaced the pregnant ones with others fit for sacrifice. We visited Dadu two or three days before the Eid for shopping supplies such as bags for distribution and knives needed at the slaughterhouse.

Administrators and business people from business associations that mediated the donation of sacrificial animals from Denizli, Istanbul, Denmark and London were to come to Dadu with us. Before their arrival, we returned to Karachi. We divided tasks among ourselves about welcoming the groups in Karachi and transferring them to the slaughterhouse locations according to their flight schedules. Some groups would also take flights to other cities via Karachi. They had to be welcomed in Karachi and boarded on buses and planes to their destinations. We took the groups to Dadu in two vans. Students from the PakTurk Schools Clifton Branch welcomed them by singing Turkish songs and reciting Turkish poems.

In Dadu, we placed the guests in the two-star hotel where we had stayed earlier. We had dinner at the Governor’s Office on the eve of the Eid al-Adha. We started slaughtering the supererogatory sacrificial animals by the night before. We sent the group of guests, who had to take their flights sooner, to the slaughterhouse by the night before. Since all the rooms in the hotel had been occupied, only one room with a large bed remained for me and Mr. Huseyin. We had to sleep in that room for two nights with our heads and feet facing opposite directions. In the morning, the group that had been to the slaughterhouse returned. The hotel was two or three kilometres away from the slaughterhouse. After the breakfast, we boarded the guests on vans escorted by the police to distribute packaged meat in the tent camps.

Covered in dust while handing out chocolate!

The guests from England had brought with them candies, chocolates and toys to distribute to the children. “Don’t get out of the truck for your safety!” we warned them. However, a few tried to get out and give candies and chocolates in person to the children, saying “Nothing will happen!” When asked what had happened later, one guest said, “I lined up the children. I gave gifts like chocolates, balloons and toys to the first three or four of them, but after the fourth child, I found myself covered in dust 😊”. Slaughter of the sacrificial animals continued until noon on the third day of the Eid. Since the guests had to take their return flights back to their countries in the evening, we spared some packaged meat to be distributed under the supervision of the district director of agriculture. We set out but could not make it on time to the qurbani program in the evening where the guests visiting Pakistan shared their impressions and experiences on that Eid al-Adha.

Part Thirty: A bridge of health extended from Samsun to Karachi