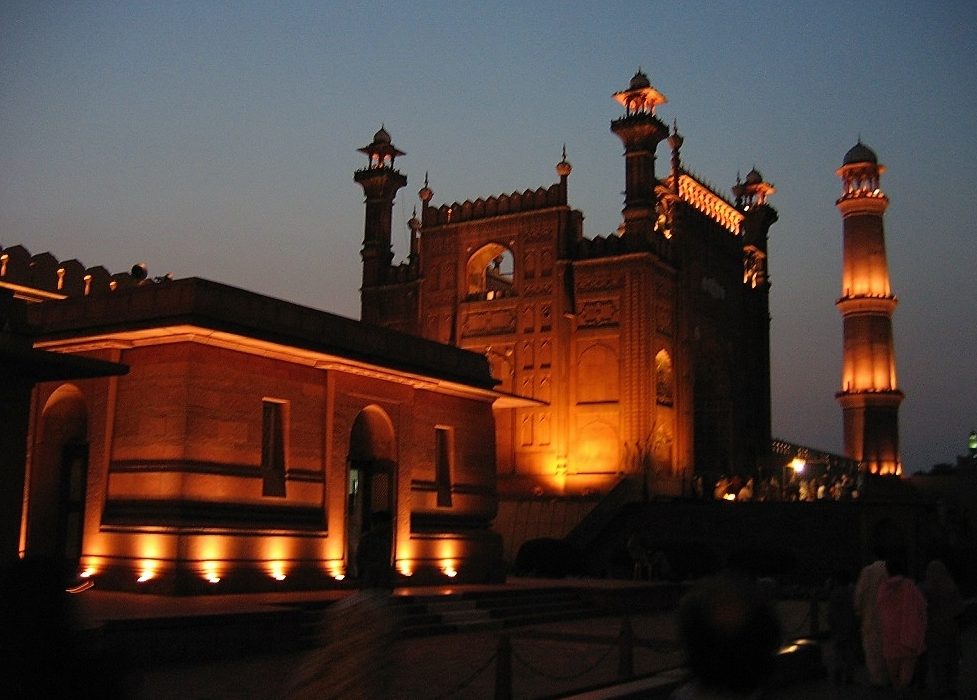 Researcher and educationist Doğan Yücel wrote about the Badshahi Masjid in Lahore, an architectural landmark considered one of the most significant religious and cultural structures of Pakistan. In this part of his article, Yücel explained the structural and architectural features of the mosque.

Architecture: As a gateway to the West, and especially to Iran, Lahore had a strong local style heavily influenced by the Persian architecture. Earlier mosques, such as the Wazir Khan Mosque, were adorned with intricate ‘kashi kari’ or ‘kashan’ style tilework, distinguishing them from the Badshahi Masjid. Aurangzeb commissioned an architectural plan similar to that done by Shah Jahan for the Jamia Masjid in Delhi, although Aurangzeb had the Badshahi Mosque built on a much larger plot. Both mosques have red sandstone inlaid with white marble, with decoration done in fine tilework, unlike the previous typical mosque designs in Lahore.

The Badshahi Mosque is a testament to the refinement and daring of the emperor of the time. It is uniquely beautiful inside out. Rich ornaments in gypsum (manbatkari) and panels with fresco touches beautify the interior of the mosque, while stone carvings and marble inlays on red sandstone and prominently embossed ‘loti’ motifs embellish the exterior. The main hall of worship bears a profoundly and meticulously calculated acoustics. From where the pulpit is located, smooth-flowing sound channels were built on the walls all over the mosque. Whispers from a corner can be heard at another. I tried and confirmed this often.

Evening view of the mosque with quality food

When illuminated in the evening, the Badshahi Mosque offers an unmissable sight. Especially nowadays, the ‘picturesque’ and stunning view of the mosque can be enjoyed with quality food served on the new food street. Although several narrations such as ‘protecting the holy relics’ are counted among the reasons for building the mosque on a high pedestal, the most realistic purpose must be ‘protecting the architectural marvel from the ravages of the Ravi’. Since this river used to flow close to the site, the mosque was built on a raised platform to protect the structure from flooding. Historical sources relate Emperor Aurangzeb commission barriers to be placed on the riverbed to steer the river away from the mosque and prevent it from damage. Due to this intervention, the river changed its course over time.

The Badshahi Mosque essentially spans on a square of 170 meters on both sides. Since the northern end of the mosque was built on the bank of the Ravi, a northern gate similar to that of the Jamia Masjid could not be built and, to preserve the general symmetry, a south gate was not added.

Entrance of the complex: The entrance to the complex is from a two-story structure built of red sandstone with carved panels, each side of which is framed and elaborately decorated. The building has ‘muqarnas’, an architectural feature unique to the Middle East first introduced to the Mughal architecture with the construction of the ornate Wazir Khan Mosque nearby.

The full title of the Badshahi Masjid is inscribed on the vaulted entrance as ‘Masjid Abu’l Zafar Muhy-ud-Deen Muhammad Alamgir Badshah Ghazi’ in marble engraving. The inscription on the door mentions the years of construction as 1084 AH (1673-74 AD). The gate of the mosque faces east to the Alamgiri Gate of the Lahore Fort, also commissioned by Aurangzeb. The grand entrance and the mosque are on a plinth, climbed by a 22-step staircase leading to the main gate. The entrance structure itself contains several rooms not directly accessible to the public. In the rooms, the relics of Hadhrat Ali (radhiAllahu anh), the son-in-law of Holy Prophet Muhammad (sallAllahu alayhi wa sallam) and other Muslim saints are exhibited. I have been fortunate enough to see these sacred relics often. When I lived in Lahore, I had the pleasure of showing and introducing the relics to almost every guest who visited the city.

The benefits of entering the mosque with bootikins!

Courtyard: After walking through the huge gate of the mosque, you are welcomed by its large red sandstone-paved courtyard spanning 276,000 square feet (25,600 square meters) which can accommodate 100,000 people when it functions as an Eidgah (central worship venue for the congregational Eid prayers). The courtyard is surrounded by single-nave porticoes. Since you remove your shoes and leave them in the numbered pigeonholes at the entrance in summer months, it is essential to take ablution in the area on the left and keep your feet wet. If you wish your shoes not to be flattened, it would be a good idea to tip the attendant there. We learned the benefits of entering the mosque with cloth bootikins to walk without burning our feet on stone slabs baked in scorching sun. In the courtyard is another open-air marble ablution area. Thin carpets leading from the entrance and the open-air ablution area to the main worship hall are frequently sprinkled with water keep your feet cool against the hot stone slabs in the summer sun.

On the right side of the courtyard is a copy of the Holy Qur’an written with gold and silver strings. It is said a renowned tailor of the city wished to bequeath a lasting work behind himself after a store fire destroyed all he had and thus he stitched and inscribed a copy of the Holy Qur’an with needlework. As mentioned earlier, the little rooms on the side of the courtyard facing the Ravi River have not yet been rebuilt after the demolition by the British.

Capacity to hold a congregation of 10,000 people

Worship Area: The main structure at the complex was also built of red sandstone and decorated with white marble inlay. There is an arched niche in the worship area, and the five surrounding niches are about one-third the size of the central niche. The large dome in the middle and two smaller domes on either side are onion-shaped and built of marble. The main worship hall has a focal angled niche with five surrounding niches approximately 33 percent of the central niche.

Both the interior and exterior of the mosque are decorated with finely crafted white marbles, carved with floral patterns typical of the Mughal art. The carvings in the Badshahi Masjid are considered unique and inimitable works of the Mughal architecture. Parts on either side of the main expanse contain rooms used for religious education. The mosque can hold a congregation of 10,000 people in its worship area.

The ‘zanjeera’ weave and flower designs with spider-like branches on the interior and exterior of the building and the boldly embroidered reliefs are unmatched marvels of art and craftsmanship of the Mughal architecture.

Retains all its splendour and substance

Minarets: At each of the four corners of the mosque is an octagonal three-storey minaret made of red sandstone, 196 feet (60 m) high with an outer circumference of 67 feet and an interior circumference of 8.5 feet. There are four smaller octagonal minarets in each corner of the main prayer hall.

The grandeur of the mosque must be considered with its exceptional and extraordinary size, once visible from almost 15 kilometres during the first 70 years after its construction in 1673. There is no doubt the Badshahi Mosque is as central today as it was then. Even today, this historical and religious place of worship stands as a testimonial to the brilliance of the Turkish-Islamic work of art with all its splendour.

Part One: Badshahi Masjid: The spiritual centre of Pakistan